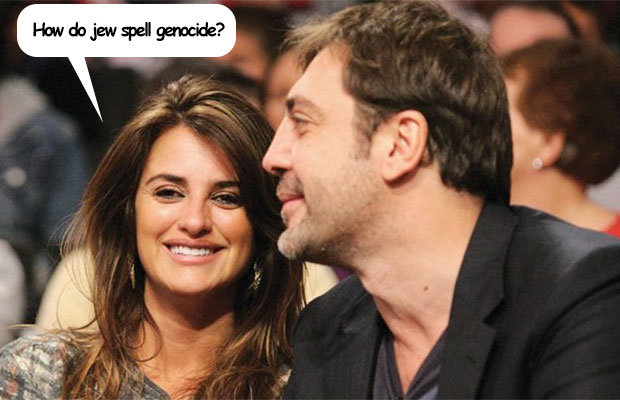 Well, everyone is entitled to their opinion, regardless of how one-sided and, well, flat out wrong it is. It was reported today that a number of Spanish artists signed a letter which admirably sought to put an end to civilian casualties in Gaza. Except, the letter was one sided, positing all the blame on Israel while not even (as far as I can tell) mentioning Hamas. To make matters worse, they declared that Israel was committing “genocide” in Gaza. Why does this make matters worse? Because once you begin with a biased analysis and pin the blame on one party and then make outlandish and unsubstantiated accusations of genocide, then, well, you’ve revealed an ideological predisposition that has nothing to do with your desire for peace, your championship of human rights, your admiration of justice, and your concern for the welfare of the civilians of Gaza.

Say what you will about the IDF, but it is clear that they don’t in fact target civilians as a matter of course. If they did, the casualty count in Gaza would be far higher. Award winning author Sam Harris put it best on his blog post “Why Don’t I criticize Israel?” when he stated:

Whatever terrible things the Israelis have done, it is also true to say that they have used more restraint in their fighting against the Palestinians than weâ€”the Americans, or Western Europeansâ€”have used in any of our wars. They have endured more worldwide public scrutiny than any other society has ever had to while defending itself against aggressors. The Israelis simply are held to a different standard. And the condemnation leveled at them by the rest of the world is completely out of proportion to what they have actually done.

We can guess at why Israel is held to a different standard all we like. We can also question the motivations of the Spanish artists who signed the letter as well. I will just assume that such luminaries as Pedro Alomodovar (Women on the Verge of a Nervous Breakdown, Tie Me Up! Tie Me Down!), Penelope Cruz (Vanilla Sky, Volver, Vicky Cristina Barcelona), and Cruz’s husband Academy Award winner Javier Bardem (No Country for Old Men, Skyfall) are well meaning but painfully ignorant. I mean, what else can I do? No one expects the Spanish Inquisition after all.

Cruz and Bardem who still have Hollywood movies coming up have a lot to lose as a result of their ignorance. I mean how awkward is it going to be on the set of Sacha Baron Cohen’s upcoming movie Grimsby in which Cruz has a leading role? Similarly, all of Bardem’s movies are full of Jews. Hollywood Jews are not particularly politically active or outspoken with most espousing decidedly liberal perspectives and Democratic Party allegiances. However, as the Hollywood Reporter recently stated, in Hollywood Rule 1: Talk About Anything Political in Hollywood … Except Gaza. Despite being willing to share their opinions, pretty much nobody agreed to have their name mentioned for this story. That tells you something. Look for Cruz and Bardem to appear in something produced in Spain (not Hollywood) in 2016 and beyond. Look for the plight of the Palestinians to be improved by not one single iota as a result of our Spanish friend’s political outspokeness. Shocker.