Amal and the Night Inquisitors 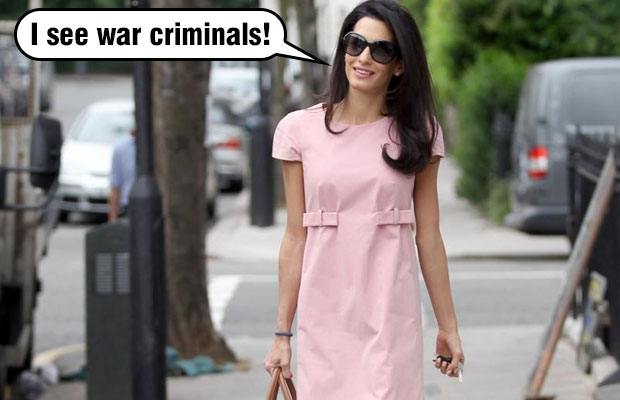 Gabon ambassador Baudelaire Ndong Ella, the president of the 47-nation UN Human Rights Council, announced that the British-Lebanese lawyer and barrister, Amal Ramzi Alamuddin, has been selected to serve on the United Nation’s three-member commission of inquiry looking into possible violations of the rules of war in Gaza. Alamuddin is a former legal adviser to the prosecutor of the special tribunal for Lebanon. When she was four, in 1982, her family left Beirut as the IDF moved closer to Lebanon’s capital.

She has celebrity status as she is currently engaged to actor/producer/pundit George Clooney.

Some say their commission will focus on Israeli crimes against Gazans, and not the other side of the equation.

The other two members of the commission are Doudou Diene, a Senegalese attorney who has served on United Nations positions on human rights in Ivory Coast; and William Schabas, a Canadian professor of international law who teaches at London’s Middlesex University. Schabas will serve as the chairperson, and will submit its report to the UN in March 2015.

Some have already said that the commission will be biased.

I don’t know why.

Sure, Professor William Schabas is a critic of Israel and has in the past accused Israel of violations of international humanitarian law. He also wanted Israel’s leaders to be indicted.

In 2013, in New York City, Schabas said about indicted Israelis, “….My favorite would be (PM) Netanyahu within the dock of the International Criminal Court.” A few years earlier, he said that if there was an indictment in the ICC against the president of Sudan for genocide, why should a similar indictment not be issued against the Israeli president for events in Gaza.

But that doesn’t mean he is biased, does it?

Was the UN’s Goldstone Report biased after Operation Cast Lead in 2009? Umm.. okay, yes, it was. Israel’s Office of the Prime Minister said the commission is like a “kangaroo court.” And Israel’s Foreign Ministry does not plan to cooperate.