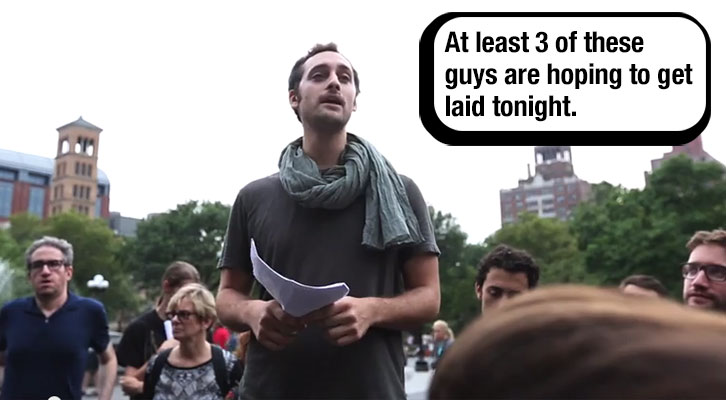 On Friday August 1st, a Jewish group called If Not Now organized a Kabbalat Shabbat/Mourner’s Kaddish in Washington Square Park in New York City. They gathered to

…stand together against the ongoing violence in Gaza and Israel. Under the Banner “If Not Now, When?”, they read the Mourner’s Kaddish, sang anti-war songs and read the names of the hundreds of Palestinians and Israelis killed in the previous week as a result of the conflict.

Here’s a video of the event by “Edge of the Shore Media” – if you want to support more videos like this visit their crowdfunding site – while “hundreds” gathered that day, no one has yet to donate a nickel for more such videos. I attended as an observer, but don’t try to find me in the video!

In 1996, VH1 premiered Pop Up Video, a show that combined music videos with pop up nuggets of info that was full of “…trivia, witticisms and borderline sexual innuendos throughout…” So basically, a business based on the dissemination of music videos had, as it’s most popular show, a program that makes fun of the same videos. Now, let me be clear. The folks behind If Not Now seem like nice, caring people. I too share their concern with the casualties in Gaza. However, their one-sided, self righteous indignation, their fresh scrubbed earnestness, their naive ignorance, their well-meaning but wholesale adoption of talking points cravenly crafted by people who hate Israel more than they care about civilians in Gaza, well, what can I say? It was just too funny! All these self-appointed humanitarians with their fancy made-in-sweatshop clothes, showing their care for the downtrodden yet never mentioning the Hamas war criminals who are the direct cause of the death and misery they weep about – it just begged for the Pop Up treatment! (Also, I was hit on three times at the rally. Who does that at a mourners gathering?) So without further ado, here it is… (thanks to Robert for the Photoshop help!) Watch the video in tandem with the slide show!

The pop ups are meant to be funny. For instance, I don’t actually know if the guy in the Berkeley shirt went to Berkeley. The bro with the red leather skater shoes did not have a skateboard with him, but maybe he has one at home? I don’t actually know anything about the old dude, he might be a janitor for all I know. What I do know is that this turnout was literally a drop in the bucket compared to thousands who attend pro-Israel rallies organized across the country. #IfNotNow represents a tiny but vocal and media savvy minority. Don’t get me wrong. I am sickened by the needless deaths in Gaza, but my perspective is nuanced and informed. These folks? Well… they clearly have issues. They take liberties with their Judaism that are more informed by PC guidelines than they are by spirituality. Or actual Judaism. I appreciate their dissent – that’s part of a Jewish tradition that goes back to Korach after all! But please let’s use this as a teachable moment. War is bad ok? Death is bad, right? One sided analysis however? Not so good. Pretending to be representative of your generation and smarter than everyone else? Untrue and dishonest.

And if you are attending a somber gathering, leave the frat boy antics at home and don’t hit on people you don’t know.