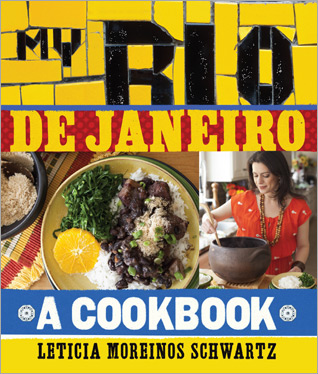 During the World Cup 2014 in Brazil, I wanted to highlight a recipe or two from Brazilian-Jewish chef Leticia Moreinos Schwartz. But with the kidnappings and Gaza, I postponed that posting. Time has marched on, and we are days away from the High Holidays and a new year, so here is a unique Wednesday Jewlicious Eats of the Week: MY RIO DE JANEIRO. A COOKBOOK By Leticia Moreinos Schwartz (Kyle Books, Fall 2013) I met Chef Schwartz and purchased her book last Fall at the Miami International Book Fair.

Leticia is a carioca, a native of Rio de Janeiro, and she arrived in New York City in 1997 to study culinary arts. After a decade of working in restaurants and writing, she published her first cookbook, The Brazilian Kitchen. She followed this with a blog, and then this book, which explores the hidden recipes of Rio: from juices and salads to entrees and desserts.

The cooking in Rio is dominated by lusitanic (meaning Iberian, Portuguese) flavors of cod, garlic, onions, bay leaves, and salt. Her book’s chapters are segmented by neighborhood. For each recipe, she includes the name, address, and website of the restaurant the recipe is borrowed from. She begins with Leblon and Ipanema, and by chapter 10 and 11, she visits the chefs in Paraty and Regiao Serrana.

For Copacabana and Leme, she shares a Paco de Mel, or a Chocolate Covered Honey Bread with Dulce De Leche Filling. It is from the Kopenhagen Restaurant, Rio’s favorite chocolate eatery. Don’t let the Peo (bread) in the name fool you, it is a decadent honey cake… which seems appropriate for the High Holidays. It uses flour, cocoa powder, honey, nutmeg, cinnamon, walnuts, vanilla, condensed milk, and 2 pounds of baking chocolate.

Guys, it’s Rio. There are lots of recipes with seafood and pork, and even a Piranha Soup. But you cherry pick out the ones that can work for a traditional Jewish kitchen. (hey, the Spinach Crepes in Tomato Sauce DO use kosher salt)

At the back of the cookbook, she shares home cooking recipes. There is Aunt Sarita (Tia Sarita), her father’s oldest sister. They are from Tangier and immigrated to Brazil five decades ago. Tia Sarita is in her 80’s and cooks with Neusa de Souza, an African Brazilian woman. Her recipe is for Moroccan Meatballs, with Hungarian paprika, and Saffron Sauce. Chef Schwartz closes with Almond Cake; Rice Pudding; Pot Roast (from Dona Angelina Aparecida Masieiro Braz) which uses beef chuck instead of brisket; and Ground Beef with Hard Boiled Egg and Olives.

With regard to the holidays, some recipes:

De-salt the cod:
When buying the salt cod, try to find a piece that looks very meaty. Trim away all the dark parts around the belly and tail.

Rinse the fish in cold water and place it inside a large container. The volume of water should be 10 to 15 times the size of the cod, so use a very big container (maybe a plastic bucket or a large pitcher). Fill it with about 2½ gallons cold water, and store it in the refrigerator to soak for 2 to 3 days (if you want to maximize space in your refrigerator, cover the container with a lid, however it is not necessary). Change the water at least 3 times per day and each time you change the water, rinse the container as well. It is very important to de-salt the cod properly, otherwise the dish will taste too salty.

On the day you will be cooking the cod, remove it from the container and place it in a medium sized saucepan. Cover the fish with cold milk so that it cooks gently and does not suffer any shock of temperature. Bring it to a boil over medium heat. Reduce the heat to low and cook the cod, uncovered until it becomes opaque, about 5 to 7 minutes.

Using a slotted spoon, remove the cod from the hot milk and discard the milk. Flake the meat with your hands into big chunks then shred the fish by either chopping it with a chef’s knife or passing it through a food processor on the pulse mode. The fish will have lost about half its weight after being desalted and cooked, so you should have about ½ lb (1 ½ cups) of shredded fish. Place the cod in a plastic container covered with a tightly fitting lid and refrigerate until ready to use (you can keep the cooked shredded cod for up to 6 hours before using).

Prepare the mashed potatoes:
Peel the potato and cut it into similar-size pieces to ensure even cooking.
Place the pieces in a heavy bottomed saucepan and cover them with cold water; add a pinch of salt.
Cover the pan, bring the water to a boil then reduce the heat to medium and simmer until the potatoes are fork- tender, about 8 to 10 minutes; drain them in a colander. While they are still hot, pass the potatoes through a ricer or food mill. Expect about 1 1/3 cup of mashed potatoes. You should assemble the cod fritters while the potatoes are still warm.

Assemble the fritters:
In a large bowl, mix the shredded cod, mashed potatoes, onions, garlic, parsley, egg yolks, olive oil, and cayenne. If this batter gets too hard to mix by hand you can use an electric mixer with the paddle attachment at low speed. Add the salt, pepper, and nutmeg to taste.
In a separate bowl, use an electric mixer with the whisk attachment to beat the egg whites until they form soft peaks. Be advised that egg whites without sugar can be easily over beat and lumpy, so be careful.

Carefully incorporate the egg whites into the cod/potato mixture by folding it in with a rubber spatula. At this point the batter should feel light, airy and a bit runny. You won’t be able to shape the fritters with your hands since the dough is so light (that’s what makes it so good) so you will need to spoon the batter directly into the hot oil.

Fry the fritters:
Pour the vegetable oil into a heavy-bottomed pot or casserole and heat the oil to 350°F as measured with a deep fat thermometer. If you don’t have a thermometer, pour a drip of batter into the oil; if you hear a sizzling sound and see the batter turning golden brown, then the oil is ready.
Using a small ice-cream scoop or tablespoon, drop each spoonful into the oil. Only add as many as will fit without touching each other- otherwise they won’t fry evenly. Turn them occasionally with a long slotted spoon, making sure both sides are browned evenly.

When each fritter is lightly browned all over, remove it from the oil and place it onto a half sheet pan or another large, flat tray that’s been covered with a double thickness of paper towels to absorb extra oil. Pat off any excess oil. Continue working in batches until all the fritters are cooked; keep the finished batches in a warm oven until serving. Serve immediately with tartare sauce. These can be reheated in a 300°F oven for 5 to 10 minutes.

A KOSHER – NON PORK – FAIJOADA
(not in the cookbook)

Process:
Place the beans in a very large pot, and cover them with the cold water.

Cover the pan and bring the water to a boil over high heat.

When the water boils, adjust the heat to medium-high and cook the beans, covered, until they are just cooked but not too mushy, about 1 to 1.5 hours.

The liquid will appear thin and clear. Keep the beans in the liquid and set them aside. This step can be completed up to two days ahead of time; just keep the beans and the liquid in a plastic container, covered with a tight-fitting lid, in the refrigerator.

While the beans are cooking, prepare the chicken and vegetables. Pat the chicken pieces dry with a paper towel and season the chicken with salt and pepper on both sides.

Pour 2 tablespoons of the canola oil in a large sauté pan, and cook the chicken over medium heat until it is golden brown on both sides, about 4 minutes per side.

Cook the chicken in batches, with space between them to prevent sticking to the pan.

Transfer the chicken to a bowl or a sheet pan and cover it with aluminum foil, making sure steam cannot escape.

Use the white wine to “deglaze” the pan by scraping the pan with a wooden spoon, making sure all the “jus” and brown bits stuck to the pan gets transferred to the liquid.

Boil until the liquid is well infused with flavor then strain it into a bowl.

Pour the remaining 2 tablespoons of canola oil into a large Dutch oven and cook the onion, celery, scallions and bell pepper over medium heat, stirring with a wooden spoon, until soft and tender, or about 3 minutes.

Add the garlic and cook it until it gets hot, about another minute.

Add the chicken and all its juices that might have accumulated in the bowl. Then add the reserved beans and all their liquid, and the strained deglazing liquid.

The chicken should be covered almost entirely with the beans, vegetables, and liquid.

Add the bay leaves and simmer on very low heat with the pan uncovered so that the liquid has a chance to reduce and thicken, and the chicken meat is tender, sliding off the bone, about 1 to 1.5 hours.

Before finishing, slightly tilt the pan and scoop out any chicken fat. The black bean sauce should be glossy and earthy.

Taste the dish and season with salt, pepper, nutmeg, and cayenne pepper. Top it with the fresh parsley.

Serve each piece of chicken over white rice or any other starch of your choice and top with a ladle full of the bean sauce.

Here is a recipe from thebook for Abobrinha Frita de Rita, or Rita’s Fried Zucchini from the recipe box of Rita de Cassia Pereira da Silva, a home cook in Rio. For Rosh Hashana, a zucchini is a symbolic food that symbolizes public recognition of mitzvot and a ‘ripping up” of bad deeds. (“Kra” in Hebrew means zucchini, but is also the root for “rip.”)

Trim the top and bottom of the zucchinis
Cut them in half and then into sticks that are 3 to 4 inches in length
Place these zucchini sticks in a colander and set inside a bowl.
Sprinkle with salt and set aside for AT LEAST 20 minutes, but PREFERABLY AN HOUR
After the vegetables have released their water, transfer to a plate lined with double thick paper towels; [at dry to remove excess moisture

Pour the flour into a bowl, season.
Toss zucchini sticks into the flour.
Shake a little, not a lot, let some excess flour fall off.
Fry the sticks until golden brown (4 minutes). Don;t crowd them
Transfer to a plate, cover with paper towels
Serve immediately