JewliciousReads: No Kumbayas at Camp David 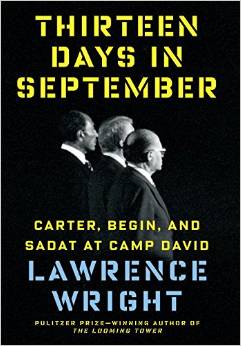 A Southern Baptist, a Muslim, and a Jew walk into a bar… but in this case, the bar was a woodsy park encampment in the Catoctin Mountains.

It was September 1978, half a year after Israel entered Lebanon in response to Palestinian terror attacks, and was nearly a year after Sadat went to Jerusalem and addressed the Knesset. Carter had brought together Sadat and Begin, as well as Moshe Dayan, Zbigniew Brzezinski, Osama el-Baz, and even Rosalynn Carter.

(Wright explores how Rosalynn, as host, played a role in bringing the agreement to fruition.)

Rosalynn set up a first item for discussion. It was a prayer to open the Camp David conference. Begin changed the wording like a good barrister. It was a good ploy to find something positive the parties could agree upon, but it would lay the groundwork for differences. The prayer was: “After four wars, despite vast human effort, the Holy Land does not yet enjoy the blessings of peace. Conscious of the grave issues which face us, we place our trust in the God of our fathers, from whom we seek wisdom and guidance. As we meet here at Camp David, we ask people of all faiths to pray with us that peace and justice may result from these deliberations.”

The thirteen days were marked by continual setbacks. Carter had hoped and expected that he could simply put Begin and Sadat together in the same room, and in the quiet isolation of the mountaintop encampment in Maryland they would learn to trust each other and miraculously make peace. He expected to be the facilitator, not the cajoling leader. Carter said they could dress casually; Begin refused, perhaps lest casual clothes lead to intimacy and softness. Carter thought that if each man would share their stories of imprisonment it would create a new bond between them. It didn’t. Begin and Brzezinski – both Polish born – sat down for a game – or battle – of chess. Begin won 2 of the 3 games. They remained “Poles Apart” and no warmth was created between them from the game.

Jimmy Carter is portrayed as a persistent pusher. His presidency was failing, inflation was double digits. Sadat presided over an Egypt mired in poverty and losing Soviet support. Carter, a devout Southern Baptist, had visited Israel in 1973, and thought that God might be working through him to bring peace to the Middle East. He seriously believed that peace would be made, spurred on by his feeling that a divine God was leading him to that end. Sadat brought a Sufi mystic, Hassan al-Tohamy, who reported his visions. The Egyptian delegation thought he was mentally ill, but Sadat listened to his prophecies. Begin himself made a reference to messianic times (when – of course – it suited his position in the negotiations).

We learn that during the first meeting, the Egyptians and Israelis were screaming at each other. By Day 3, they were separated and Carter started shuttling between the two groups. Sadat threatened to leave; Carter prayed. Carter threatened to blame the failure of the talks on him; Sadat remained. Carter threatened Begin; Begin did not budge. Sadat and Carter sought a plan for Gaza and the West Bank, but those issues were tabled. Carter used economic aid as a threat; he found that it worked better than other earlier threats. the parties hated each other and hated being at Camp David. On Day 13, television broadcasters were ready to show the signing live from the White House, but a last-minute fight over Jerusalem nearly scrapped the peace plan.

Unfortunately, Wright is a journalist, and not a Historian.

The book grew out a play, and actually grew out of an offer from Gerald Rafshoon, in 2011. Rafshoon, Carter’s campaign adviser and White House communications director, approached Wright with the idea to write a play about the negotiations. Rafshoon’s underlying goal was to make Carter look like a hero and rehabilitate his image. Wright draws the characters too simply: Carter is earnest, Sadat is a saint, and Begin is an arrogant curmudgeon and roadblock to peace.