Vogue – Getting All Political Up in My Face 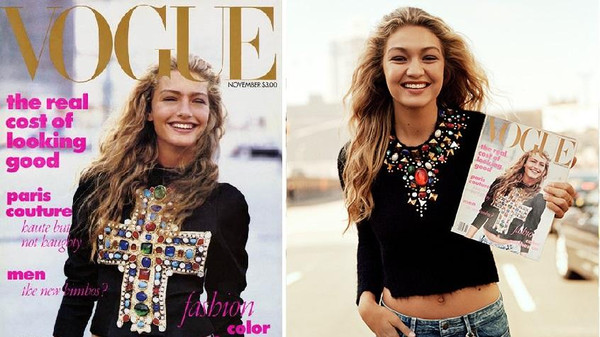 A quarter century ago, in 1988, Anna Wintour took control of the world’s fashion bible: Vogue magazine. For her first issue, she chose Israeli model Michaela Bercu, then 19, as the cover model. Now, 26 years later, Wintour has selected model Gigi Hadid, also 19, a Palestinian-American as the “cover” model to relaunch Vogue’s website.

Is it a publicity stunt to garner extra publicity for the web relaunch or a political statement? Was this a conscious decision that was made this Summer during the fighting between Hamas and Israel?

Of course it was, since Hadid is wearing nearly the same outfit as Bercu did, and their look is similar.

Hadid wears a similar bejeweled ALC sweater and Guess jeans as Bercu (Bercus wore Christian Lacroix with her jeans). Wait. Hadid is also clutching a copy of the November 1988 magazine. She was photographed by Sean Thomas. Is Wintour trying to say that Israelis and Palestinians are the same under their (genes)jeans?

Gigi Hadid hails from sunny California. Although tagged as Palestinian-American by Vogue, she is Dutch-Palestinian-American. Her mother is “Real Housewives of Beverly Hills” Yolanda van den Herik Hadid Foster, and her father is Mohamed Hadid, a real estate developer known for developing Ritz Carlton hotels and mega-enormous mansions. Mohamed was born in Nazareth in 1948 and grew up in Beirut, Damascus, and Washington DC, where his literary father worked for Voice of America. You probably remember is very vogue and hip nightclub in Rhodes in the 1970s. Mohamed is presently divorced from Yolanda, who got a nice portion of his estimated $100 million in net worth.

Gigi was a Sports Illustrated ‘It” girl this year (just as Bercu was one in 1990), and Gigi appeared in Elle, and modeled for Guess, Tom Ford, and Meisel’s Pirelli calendar.

Bercu briefly retired from modeling. She is married to Ron Zuckerman, with whom she has several children. In Spring 2014, she was the star of the Israeli Onot collection apparel campaign for “curvy” women. Her modeling of their djellaba dresses, in shades of black, white or coral, received praise.