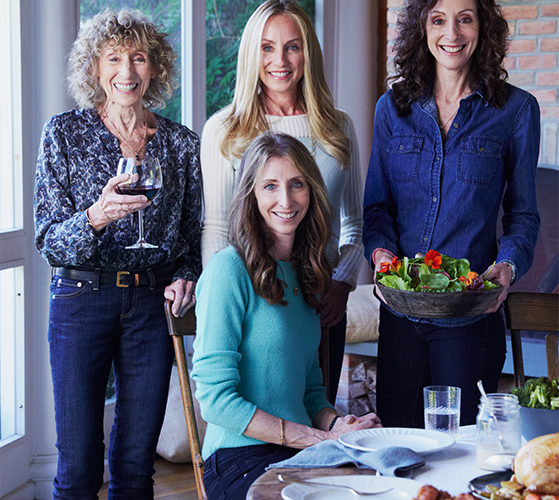 This was an incredible few weeks for cookbook readers. This was originally titled “Pollans, Portlandias, PseudoThugs & Plenty More,” but I will post it separately so that this is just Pollans & Portlandia

This is a very happy cookbook with a family focus. The chances that we will marry into the Pollan family or be invited over for dinner are small; so this is the next best thing.

I recommend the Pollan signature salad that includes mesclun, walnuts, pear, and a mustard, raspberry vinegar, olive oil, balsamic vinegar dressing (it is made by each of the sisters, their mother and brother; and it is requested by their friends and family for potlucks); the golden baby artichokes with lemon zest; their Grandma Mary’s Grand Marnier Orange Cake (her version of Jewish nut cake, Lori used to make it and sell it on Martha’s Vineyard); Grandma Mary’s Mandelbrot cookies; Sam’s applesauce spice cookies; Aquinnah and Schuyler’s chocolate cream pie; Isaac’s Mexican wedding cookies; Chickpea salad with Manchego cheese (as in Man of La Mancha), dijon, red wine vinegar, and arugula; a pilaf of farro and vegetables; their fusilli with oven roasted vegetables and parmesan cheese; the spinach and ricotta malfatti (a malfatti is a mistaken raviolini… hey, it uses kosher salt); and the Panfried halibut with chimichurri sauce.

The Pollan’s recommend that we get over our performance anxiety for family dinners. Don’t push to be a professional restaurant chef. Don’t worry if you don’t cut an onion like they do on TV. These are family dinners. As Michael Pollan says, they are sophisticated recipes that use approachable techniques. And you don’t have to cook family meals every night. Start slowly. Try one night a week or less. And grow from there.

Speaking of technique, there are “Sage Advice” pointers. For example: Read the whole recipe from start to finish before starting. It isn’t a movie, you don’t want a surprise ending. You should assemble all the ingredients before beginning. Roasting a chicken? Put the legs at the back of the oven where it is hottest (who knew?). Boil a vegetable in already boiling water; but when boiling a starch, such as a potato, start the vegetable in a pot cold water and bring it to a boil.

There is creativity in some simple items. For example, their simple bistro burgers and turkey burgers make use of cold unsalted butter (which is probably common, I just did not know about it). The speedy skillet beef with pineapple and peppers is a nice flare for what might have just been beef with peppers and onions; and their Hunter’s Chicken Stew is their “Italian” take on a Polish dish, with chicken, mushrooms, tomatoes, thyme, sage, chicken broth, white wine and garlic. (Seriously, if you just use the hunter stew and the Pollan family salad recipes, you get your money’s worth from this cookbook.) Michael J. Fox, the actor/producer/philanthropist writes on the back cover, “Tracy’s family set a place for me at the Pollan Family Table, over 25 years ago now. This gorgeous book brings to mind so many holiday meals and other family gatherings as well as countless smaller moments when we could have just had a meal on the fly but instead made time to sit together and share. This is what my life tastes like. Enjoy.”

Here are three Sample Recipes from the book

The cookbook is informative, easy to follow, creative, and funny. It is based on the cable television series, Portlandia, about the residents of the place at attitude known as Portland, Oregon.

There is a bird on the cover, cuz, as you know, you should put a bird on it. The book opens with a notice from the Portland Allergy Council. They approved the book, but you should proceed with caution, nevertheless, and call the council during business hours, if necessary. It also opens with a map of 33 noteworthy restaurants in Portland.

The chapters are segmented into these groupings: 01 Small Plates; 02 Main Courses; 03 Desserts; 04 Drinks; and 05 Brunch. Throughout the book are comments from the various Portlandia characters, and some very funny items, like the ad from a guy who can come 24/7 and help you to split a restaurant check (for example, should non drinkers have to pay for drinks when splitting?; Should you split it by vegetarian vs. non-vegetarian dishes?)

I learned that a Semifreddo a semi-frozen dessert, typically an ice-cream cakes. It has the texture of frozen mousse. A few other intersting recipes were for Tagliata with Artichoke Salad; Chicken Shawarma with Tahini Mayo; and Cedar Planked Salmon with Tangy Radish Slaw.

Hey, it’s Doug. My babysitter Ellen doesn’t let me play drums after 9 p.m., which I personally don’t think is fair. 9 p.m.? Come on! Right? What am I, a child? I am a man. A full-grown man. Even though my drum curfew is . . . absurdly outrageous . . . my babysitter can actually be pretty cool sometimes. Overall, I would say that I like her. She watches TV with me. All of the History Channel shows that Claire won’t watch . . . like Car Traders and Appalachian Bandits. And she makes me this macaroni and cheese that is, honestly: so, so, so, so, so, so, so good. So good. So, so good. It’s all I ever want to eat for the rest of my life. And I hope I live to be, like two hundred–that’s how much of this macaroni and cheese I want to eat.

Reprinted with permission from Clarkson Potter. All rights reserved.

Add the nutmeg and season with salt and pepper to taste.

Add half of the cheddar and half of the Colby-Jack and cook over low heat, stirring, until the cheese is melted. Off the heat, stir in the mustard and paprika.

Meanwhile, cook the pasta in salted boiling water until al dente. Drain well, shaking out any excess water. Return the pasta to the pot along with the cheese sauce and the remaining cheese; stir until evenly combined.

Pour the mixture into the prepared dish in an even layer. Sprinkle the Parmesan over the macaroni and bake for 45 minutes, or until bubbling and golden.

Let rest for 15 minutes before serving.

Notes
Make ahead: The unbaked mac and cheese can be refrigerated overnight. Return to room temperature before baking.