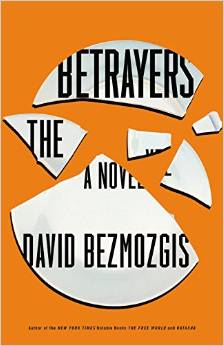 The Rosenbergs and Kotler were Both were former Soviet Refuseniks, emigres to Israel from the USSR; Baruch Kotler (Boris Solomonivich in his Soviet days) ended up in the gulag prison system for a while and because the most famous prisoner of conscience.

Now in Israel, Baruch is a famous politician. But the Rosenbergs probably won’t be sending Kotler a gift this Rosh Hashana; Baruch is the subject of a massive political scandal in Jerusalem, and he has taken the Rosenberg’s young daughter as his mistress.

The novel (or moral thriller) opens in a hotel lobby in a faded Yalta, the resort of his youth. Baruch and his mistress have flown off to Crimea to escape the Israeli press and growing scandal. Alas, there is no room at the inn, or the resort. As an MK he has refused to back down on his moralistic, principled stand on the issue of West Bank settlements. His opponents have exposed his adultery to smear and embarrass him. He is both a betrayer and one who was betrayed. How could he do this to a wife who stood by him all those years? How can he help his son who is facing his own dilemma in the IDF? Can it hurt to rent a flat for a week from one of the babushkas in the Yalta bus station, even if her husband is also a former Soviet Jew… Hey.. wait a second, isn’t this Sharansky?

Welcome to a day in the life of Baruch Kotler, one time hero of Soviet Jews. Bezmozgis makes the story so current – so real – Crimea, Yalta, scandal, Israel, Russia, the settlement on the West Bank of the Jordan River. His sentence structures, ideas, and language seduce you like an aging Knesset member seduces a young person. An intriguing, darkly comic tale that we all should read.