Will Rabbis Sue The Simpsons? 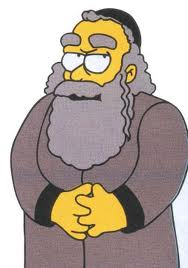 Word reached us this week that character actor Frank Sivero is suing Fox Television Studios and the creators of “The Simpsons,” saying that the character of Louie – a mobster – is based on his likeness. Sivero played a befuddled gangster in “Goodfellas” and “The Godfather Part II”. In “Goodfellas” he played Frankie Carbone.

The suit is for $250 Million and it is just 23 years after the character of Louie was introduced. The complaint alleges that the two writers of The Simpsons knew who Sivero was (they lived in adjacent apartments in Sherman Oaks, CA), and that they saw him almost every day. It says, “They knew he was developing the character he was to play in the movie ‘Goodfellas,’ a movie Sivero did in 1989. In fact, they were aware the entire character of ‘Frankie Carbone’ was created and developed by Sivero, who based this character on his own personality.” Sivero also claims that James L. Brooks’ Gracie Films – producers of The Simpsons – told him that ‘he would be part of the future’ in connection to the success of ‘The Simpsons.’ He was promised that they would make a film together; but it never happened. Sivero is represented by Alex H. Herrera of Hess, Hess & Herrera.

WHICH MAKES ME WONDER ABOUT RABBI HYMAN KRUSTOFSKI, the father of Krusty the Clown.

Sadly, the character of the rabbi passed away in the first episode of the new Fall 2014 season. But upon whom was Rabbi Krustofsky based? Surely it was not Jackie Mason, who voiced the character in some of its episodes, one of which won Mason an Emmy Award.

Attorney Steven Z. Bialy of Bagel, Bagel, Bialy and Schmearsky is seeking a rabbi or rabbi’s estate who is willing to sue for $250 Million for the infringement of his image, misappropriation of his sidelocks, and interference with prospective economic advantage and unjust enrichment.

Take a look. Remind you of anyone?

Schneerson? No, the payes are wrong. Schacter-Shalomi? No, too full a face. Heschel? No, too full a beard. Please let me know if you have a non-voyeuristic rabbi who is ready to sue.