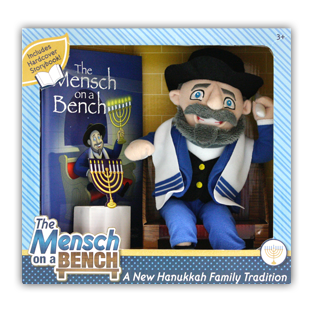 Once again, I was not invited to the White House Hanukkah Bash**. You can be sure Senator Schumer got his invite, and barely a week old, I bet Steve Rabinowitz and Aaron Keyak’s BlueLight Strategies got theirs.

But I am not bitter. So I will be spending my Wednesday catching up on all the news-bits that were published on Jews over the past few days. Stories like:

In The Wall Street Journal, Joel Golovensky tried to explain the idea of ethnicity and religion and nation states, and why Israel might want to be a Jewish State. Guess what? He is one of the authors of the proposed Knesset law to make Israel a “Nation-State of the Jewish People.”

Over at BuzzFeed, they took their Jewish character (Zach Kornfled) and shaved him down – including his back – and made him do drag (as Korn-ocopia) for Hanukkah. His missed out on a bar mitzvah at 13, so I guess this makes him a man now. Plus his grandmother came to watch and add in a few jokes.

Fleeing to Texas, I caught up with outgoing governor and possible 2016 U.S. Presidential candidate Rick Perry. Governor Perry issues a Hanukkah greeting that compares the Maccabees (not to be confused with Six13 or the Maccabeats) with the Boston Tea Party rebels. He wrote :

“It is fitting that the first night of Chanukah falls this year on the anniversary of the Boston Tea Party. The same spirit of freedom that inspired the Maccabees to rise up against a foreign empire motivated our Founding Fathers to rebel against the Crown on that fateful night,” Perry wrote in a statement released by his office….. Our Republic, like the light of the ancient Menorah, has lasted longer than anyone could have predicted. America remains a beacon of hope in difficult times for the world. And Chanukah reminds us of the power of faith to sustain a nation and ensure the security of our ally, Israel.”

Over in DC, The Washington Post asks if there is something un-Jewish about snowflakes and whether it is difficult to celebrate Hanukkah in the midst of American Christmas. They quote a toy marketing exec. who says, “Christmas has gone so secular, and Santa and elves and wreaths are so removed from Christianity, we could just say: ‘We can adopt these. There’s no harm.’ But I feel guilty.” After his 4 year old son asked to buy an elf on a shelf, he created the mensch on a bench and he plans to sell 50,000 of them in 2014.

The Oregonian – which has a lot of readers in hip Portland – also questions Jewish tradition among younger Jews. Reporter Melissa Binder asks whether Jewish community and culture will survive some Jews dismiss religion “It never would have occurred to my parents’ generation not to belong to a synagogue,” said Michael Cahana, senior rabbi at Congregation Beth Israel, a Reform synagogue in Northwest Portland. “Yet today there are thousands of Jews in the Portland metro area who aren’t involved in or seeking a synagogue.”

The New York Times probably has a Hanukkah story. Right? Yes, they go to Los Angeles to profile Joel Simkhai, an Israeli-born, but Westchester-raised entrepreneur who founded Grindr, a geo-social networking app or in some circles a gay hookup mobile app. He doesn’t discuss Jewish holidays, but speaks to accusations of “white privilege” and misogyny. He says “Grindr is a very, very visual experience. I’m not really a big believer in words.” The circuit party afficionado added, “You know, I never had any master plan to shift a culture, I made something because I wanted it for myself.” Well, I guess he is sort of like a modern day Maccabee.

Over at TIME Magazine, their Hanukkah treat for readers is a story about the Jerusalem Hanukkah truce of December 1954. It was a Hanukkah when ultra-Orthodox residents of the Israeli city did not attack secular Jews for driving or smoking at the Sabbath.

Artist Hannah Rothstein in the San Francisco Bay Area has created a (Dr. Dre)idel She tells us that it was created for its sheer hilarity and the love of puns. Each Dr. Dre face has been carefully chosen to correlate with the ‘aftermath’ of the dreidel’s spin, such as ? Gimmel, ‘take all,’ It gets a thumbs up from a happy Dr. Dre; and
? Hay, ‘take half,’ with a mildly smug portrait or Dr. Dre.

You can spin that dreidel it next to your $100,000 menorah which was just sold at auction last month, as per this CBS Marketwatch story, While listening to Jimmy Fallon’s Hanukkah songs.

I admit, I do enjoy the Big Data analysis of the spelling of Hanukkah/Chanukah over the past several decades. Bravo to the Religion News Service.

These stories leave me empty. Nothing will substitute for the White House party, except perhaps, maybe a story from ENTERTAINMENT WEEKLY. Their editors ask why there is no feel good Hanukkah movie (Eight Couples, Eight Nights, One Movie), like Valentine’s Day or Love, Actually. Their film would be directed by Garry Marshall (who, dear EW, is Christian, not Jewish, although he did play SheldN on The Odd Couple with his sister Penny, who was once married to Rob Reiner) and feature Mandy Patinkin as the spirit of Judah Maccabee, as well Seth Rogin, Winona Horowitz, Andy Samberg, Joseph Gordon-Levitt, Paul Rudd, Albert (Einstein) Brooks Natasha Lyonne Braunstein, Mel Kaminsky Brooks, and more.

** But seriously, I am not bitter about the lack of a Hanukkah party invite. It gives me a great feeling to know all the people who did get an invite this year. And kudos to Rabbi Sharon Kleinbaum of NYC’s CBST synagogue who attended the party with Tasha Calhoun, her long time synagogue assistant; to Rabbi Eytan Hammerman, of a Westchester County Jewish Community Center, who is attending; Rabbi Bisno of Rodef Shalom; and Rabbi Laurence Bazer, Lt Colonel, of Framingham’s Beth SHolom, who lit the Hanukkiah; and everyone else.

P.S. Welcome back, Alan Gross, the American contractor who was helping Cuba’s Jewish community when he was arrested and imprisoned by the Cuban Government for 5 years, after being accused of being a spy. He was released by Cuba on the first day of Hanukkah as part of a normalization deal with the USA