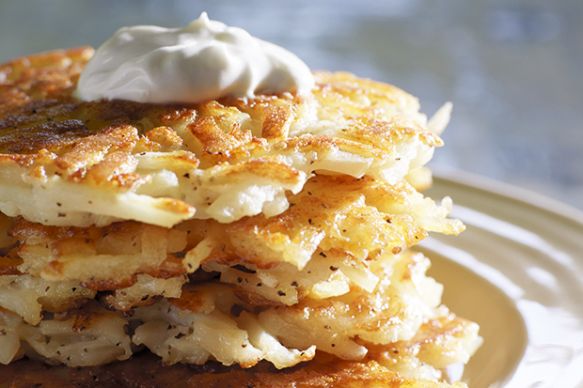 A roundup of the latke stories that are frying around the web this week.

Beginning in the West (of California), Berkeley’s newspaper of record, The Daily Californian, highlights an easy campus latke recipe by Holly Secon. While Melissa D’Arabian, writing for The Associated Press, shares her sweet potato latke recipe nationwide – a recipe inspired by a college class. It uses cumin and Greek-style yogurt.

Also out West, the Spokane Spokesman-Review newspaper shared three latke related recipes; while the San Jose Mercury News and Contra Costa paper shared a stomach warming piece about Crispy Little Latkes with smoked salmon and asparagus. While others, perhaps fueled by a desire to be daring, different or PALEO, are making latkes with foods such as zucchini, sweet potatoes and even beets, Napa’s Jamie Brown-Miller (who won this year’s Manischewitz Cook Off with her recipe for waffled latkes with matzo fried chicken) and San Francisco’s Josie A.G. Shapiro (2013 Manischewitz Cook Off winner for her recipe for faux pho) are sticking with potatoes. “Potatoes are given a bad rap,” Brown-Miller said. “They’re the boneless, skinless chicken breast of the tuber world.”

For those looking to be different, checkout The Denver Post story on the latke cook off, fry off, and throw down. This year, Agnes Dwenger is making sweet potato latkes with wasabi and wasabi tobiko (wasabi-infused fish roe). Last year, her entry was zucchini latkes with smoked trout. She received the “most innovative” award at the 6th Top Latke Taste-Off at Temple Micah in Denver.

Hand-grated potato latkes are considered the most traditional kind of Hanukkah pancake. But that’s actually a relatively new innovation, according to the late culinary historian Rabbi Gil Marks (He sadly passed away in Israel last week). In his “Encyclopedia of Jewish Food,” he says the very first Hanukkah latkes consisted of ricotta cheese, made in Italy at the end of the 15th century.

Jane Lear, who used to work at Gourmet for two decades, and is now at Participant Media’s TakePart, reminds us that Joan Nathan recommends ginger to the latke mash and that Martha Rose Shulman’s Spicy Carrot and Spinach Latkes are wonderful. Jane tried them with nigella seeds (those seeds in Armenian string cheese or the Bengali spice blend called panch phoron). She also recommends chutney instead of sour cream or raita with sprinkles of chile powder (or New Mexican chile powder and a little cumin).

The Boston Globe goes full carnivore. Their Herb and Meat Latkes use cilantro, mint, scallions, ground beef (or beef/half blend), matzo meal, and pine nuts. They come by way of Israeli chef and author, Janna Gur, author of Jewish Soul Food who visited Boston to promote her book. She also handed over her recipe for Iraqi chicken with almonds and raisins over red rice.

Joan Nathan, writing for The New York Times, skips latkes. She focuses on her favorite holiday CHALLAH: orange and fennel. Melissa Clark takes a look at the new generation’s craving for chicken fat a.k.a. Schmaltz. She reminds us that it was IN schmaltz, not olive oil, that Hanukkah latkes were fried. She writes, “The holiday may be known as the miracle of oil, but for many Ashkenazi Jews, the celebration was fueled by poultry fat.” Rabbi Deborah Prinz is quoted, that geese-raising “Eastern European Jews were using schmaltz for latkes because that’s what they had.” The New York Times SCHMALTZ LATKE recipe can be found HERE.

The Chicago Tribune goes with a mashup of everything. with a Crispy Potato Scallion Pancakes with Maple Pear Apple Sauce That are Not Just for Hanukkah. And newcomer to the Latkepalooza scene is MEN’S JOURNAL magazine. Their Spike Mendleshon’s Loukou Beignets are made by one of the most popular chefs in Washington, DC, Spike Mendleshon. His deep-fried puffs drizzled with honey are a New Year’s Eve tradition in many parts of Greece and a sweet enjoyed at Hanukkah. Since the Top Chef contestant happens to be both Greek and Jewish, these have become part of his “Grewish” tradition. They also share Littleneck’s Potato Latkes with Gin-Cured Arctic Char, courtesy of Brooklyn, NY seafood restaurant Littleneck’s chef Nick Williams, puts a spin on the classic Hannukah potato latke with the addition of cured fish; and Blue Ribbon’s Challah Doughnuts or Sufganiyot, from Bruce and Eric Bromberg of Blue Ribbon Restaurants.

Hungry? Check out the Eight Crazy Bite of Hanukkah party in Boston at the Jewish pop-up concept, Kitchen Kibitz; or The 6th Annual Latke Festival in Manhattan on Dec 15 (and it’s only about $100, but Joan Nathan and Dennis Stern are among the judges)