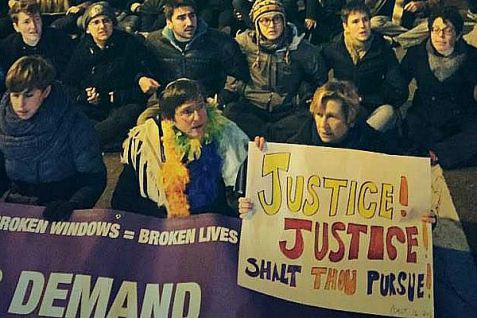 With apologies to the late Jewish mystery writer, Harry Kemelman, (author of the Rabbi Stayed Home series) on Thursday in Manhattan, several rabbis were arrested for blocking traffic as they protested recent Grand Jury decisions. They will probably need a chicago criminal lawyer to help them in their legal battle.

A protest of about 200 people began at Congregation B’nai Jeshurun at the end of the the Rabbi Marshall T. Meyer Risk Taker Awards ceremony for JFREJ: Jews for Racial and Economic Justice.

Rabbi Sharon Kleinbaum – one of three award recipients, and the leader of Congregation Beth Simchat Torah (CBST) – and several other rabbis led a protest from West 88th Street to West 96th Street and Broadway. They were opposing a Staten Island, NY grand jury’s decision not to indict NYPD Officer Daniel Pantaleo for the death of Eric Garner. Garner’s death had been ruled a homicide after he died while being arrested.

Kleinbaum, wearing a colorful feather boa that was shedding, along with Rabbis Jill Jacobs (T’ruah: The Rabbinic Call for Human Rights), Shai Held (Mechon Hadar), and David Rosenn (New Israel Fund) were among those arrested and held for six hours, until they were released at 5:15 AM. Also arrested were Marjorie Dove Kent, the executive director of JFREJ; and Randi Weingarten, the president of the American Federation of Teachers union who is also Kleinbaum’s life partner.

Protesters sang several Hebrew prayers, including Oseh Shalom and recited a Mourners’ Kaddish. They also read the names of more than 20 African Americans who the protesters said had been killed by police offers in New York City. After each name, those congregated were asked to reply, “I am responsible.” Rabbi J. Rolando Matalon (B’nai Jeshurun) said that the kaddish is “a prayer of hope” and that although it expressed the community’s outrage, it was a prayer for a brighter future.