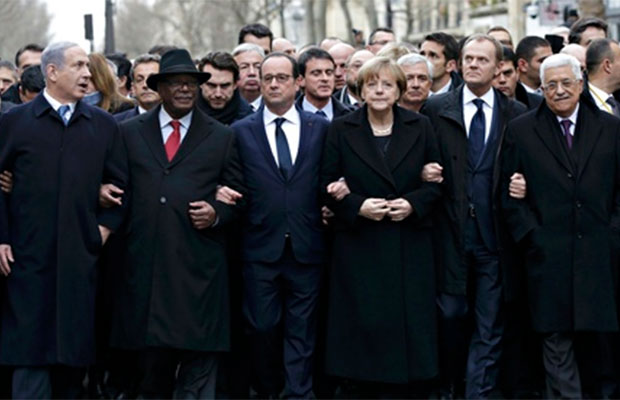 The string of deadly terror attacks began on Wednesday when brothers Said Kouachi and Cherif Kouachi attacked the offices of French satirical magazine Charlie Hebdo, murdering 12, including 2 policemen – one of whom, Ahmed Merabet, was a Muslim. This was followed by Amedy Coulibaly took 14 hostages in a Kosher grocery store in Paris, killing 4 (more would have died without the bravery of Muslim employee Lassana Bathily). ISIS and Al Qaeda were implicated in the attacks. All three terrorists were eventually gunned down by French police and security services. Today over 3 million people gathered in a rally in Paris to denounce these attacks. They were joined by 60 world leaders including French President Francois Hollande, the U.K.’s David Cameron, Germany’s Angela Merkel, Mali’s Ibrahim Boubacar Keita, The Palestine Authority’s Mahmoud Abbas, EC president Donald Tusk, Prince Rania of Jordan and Israel’s Benjamin Netanyahu among others.

This was indeed an unprecedented rally for many reasons. French media estimated that up to 3 million took part in this, the largest rally in French history, more than the numbers who took to Paris streets when the Allies liberated the city from the Nazis in World War II. That’s pretty unprecedented for sure but something else struck me as I watched the live feed.

This is the first time in recent memory that French Jews were able to walk peacefully down the streets of Paris while wearing kippahs and being visibly Jewish. Ironic, right?