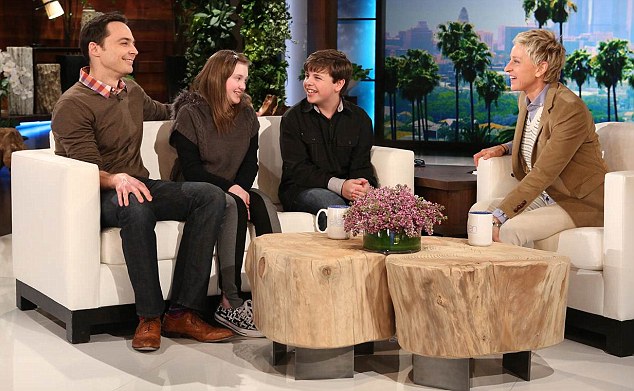 You remember how Ellen Degeneres has invited 13 year olds (or Madonna lovers) with unique Bar Mitzvah videos onto her nationally televised talkshow?

This week, she hosted 13 year old Jesse Kaufman of the Pittsburgh area, who had something much better than a video; he had a Bar Mitzvah Mitzvah project in which he donated ALL his monetary gifts to an ailing classmate.

Jesse studied to become a bar mitzvah with the Chabad Jewish Center of Monroeville, PA. Last August, Jesse told his parents and Rabbi Mendy Schapiro that he was seeking out a meaningful project. He decided to donate ALL his gifts – ALL $5,000 – to 13-year-old Jasmine “Jazzy” Boden, also of Monroeville.

Four years earlier, never having met her, he sent her a donation of $20 when he read of her plight. His grandfather had recently passed away from brain cancer and he wanted to help Boden, who was also ill. (Jesse later met Jazzy when she started fifth grade with him at his school the next year)

Boden and her mother are able to use the donated funds to defray some of her medical expenses and to travel to Massachusetts General Hospital in Boston – the only location that treats her rare cancer.

Boden’s mother, Lisa McClintock, said that Jazzy had not only missed two years of school, but two years of social interactions. “So, [Jesse] helped her in two ways – monetary, you know, money, and also just being such a good friend.”

But the Bar Mitzvah mitzvah did not just end. Jesse set up a page on GoFundMe.com to double his donation. (Fortunately, they have deleted some of the rude anti Jewish and psycho comments). Picked up on various websites, Jesse’s $5,000 donation was matched and within 48 hours, the donation was doubled.

Which brings us to The Ellen Show. After Jesse’s mother, Liana Huttner Kaufman, – you can’t stop a mother from sheppin nachas about her kids – told Ellen about Jesse’s project, Ellen invited both Jesse and Jazzy to her talk show.

Ellen, with her commercial sponsor Shutterfly, donated $10,000 to the cause, as well as two iPhone 6’s. Then actor Jim Parson’s arrived to offer gifts and to invite them to a raw rehearsal of his “Big Bang Theory” show.