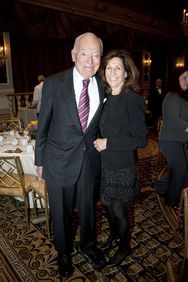 At Wharton, decades ago, I once ate a chicken salad platter (with sliced green grapes, how cool was that) with Leonard Lauder. I have felt connected to him ever since. (Not to mention the time I wrote to his late wife with a cancer-fundraising idea to create scarves and neckties with celebrity lips in Estee Lauder lipstick colors.) So I am very excited to write the Leonard Lauder, 81, one of America’s most eligible Jewish bachelor widowers is now off the market. He was married recently in Sarasota to Judith Ellis Glickman. Three – count them, 3 – rabbis helped officiate: Rabbi Brenner J. Glickman, a son of the bride; Rabbi Jeffrey Glickman, another son of the bride, and Rabbi Elaine Rose Glickman, a daughter-in-law of the bride. Ms. Glickman, 76, is a photographer, trustee, and counselor. Mr. Lauder is chairman emeritus of the Estée Lauder Companies; philanthropist; and trustee of a variety of institutions. Mazal Tov.

Speaking of Mazal and singles, The New York Times’ David Itzkoff profiles the stars of BROAD CITY. Abbi Jacobson and Ilana Glazer are the stars and writers of a slacker Comedy Central series about two single Jewish women in NYC.

And while we are on the topic of dating, Bloomberg Business Week was tired of all the stories on STARTUP ISRAEL. So they took a look at STARTUP NAZARETH and discuss the issues in involved in finding work as an Arab Israeli engineer in Israel, getting funding, parental pressure against engineering, and the start-up scene in the Galilee.

Speaking about the Galilee, today’s New York Times features an op-ed by Jerusalem born, Ohio-raised Moriel Rothman-Zecher about why he will not serve in the IDF. It just so happens that he is writing a a book about his experiences refusing to serve in the military, so I suppose this is a nice ad for his book. zzzzz.

They do not serve Chinese food in the military prison. But speaking of Chinese food, did you know that in 2014, it is estimated that over 115 million Chinese traveled abroad, and a tad more than 30,000 popped by to visit Israel. Hainan Airlines hopes to increase this number. It has applied to fly three flights a week between Israel and China – on days that El Al doesn’t have routes. May the golden wings of the Chinese Garuda Bird (their logo) find a nice nest in Ben Gurion Airport.

I heard that a Jewish-owned company has bid on the business to PULP that Collins Middle East Atlas published by Harper Collins’ Collins Bartholomew subsidiary. After the controversy over their map which was published for “local preferences” and omitted the name Israel from images in the Atlas, the publisher has agreed to pulp – or destroy – remaining copies in inventory. They will try not to delegitimize Israel in the future. This occurred after the Bishops’ Conference of England and Wales said that the omission of Israel from maps was harmful to peace efforts in the Middle East. Bishop Declan Lang, chairman of the Bishops’ Conference Department of International Affairs, said “The publication of this atlas will confirm Israel’s belief that there exists a hostility towards their country from parts of the Arab world. It will not help to build up a spirit of trust leading to peaceful co-existence.”

Uber is gaining popularity in Israel, but what happens when you have a whole platoon or a large family? Uber MAGNUM? NO. They named in UberXL. Uber will offer UberXL in Israel for those who need 8 passenger seats. (I like my Uber Magnum name better)

Japanese PM Abe might be needing an Uber XL.. It was announced on SANKEI SHIMBUN that he will visit Israel this Shabbos and promote Israel-Japan ties and also bring the leaders of over 25 Japanese companies with him. This follows Rakuten’s purchase of the Israeli company Viber for $950 million, and Kurita Water Industries prucase of an Israeli company for $320 million. Last year, PM Netanyahu and leaders from Elbit, IBM Israel, Rafael, EMC Israel, Teva, Amdocs, Q Core Medical, and 3M Israel visited Tokyo. PM Abe plans to try some kugel.

Speaking of Kugel, “Frijoles Con Kugel” is HOT in South Florida. The Sun Sentinel reports that more syngaogues and Jewish Federations are reaching out to residents of South Florida who have emigrated from South and Central America and the Spanish speaking area of the Caribbean. Broward County’s Latin Initiative already has 380 RSVPs for its beans and kugel event scheduled for April 2015.

I am sending some beans and kugel to Karina Piser of the Council of Foreign Relations in NYC. Ms. Piser writes today for Al Jazeera that the recent murders in Paris are UNLIKELY to sway more Jews to leave France for Israel and other countries. As she tweeted today about French Pride, “Je suis Bibi? ‘Mais non,’ say some French Jews.” The UK’S CHANNEL 4 FACT CHECKER takes a look at the percent of French Jews that moved to Israel in 2014 and asks if this is just a blip.

Did you watch the Golden Globes telecast? Jill Soloway, creator of “Transparent,” won a big award from best television series comedy or musical, as well as best performance by an actor for series star, Jeffrey Tambor. In her acceptance speech, Soloway thanked “MAPA” You mean Alex Mapa the gay comedian?? No, “Transparent” is sort of based on Soloway’s childhood in which her father – Dr. Harry Soloway – was transgender and she called him her “mapa.”

While Jill was a winner, the Israeli nominee was not. Although it is a WIN to be nominated. “Gett: The Trial of Viviane Amsalem” is a drama about Jewish divorce in Israel. The film was stridently against what is calls Israel’s misogynistic divorce laws.