Haredi Sex Toys and Other Newsbits 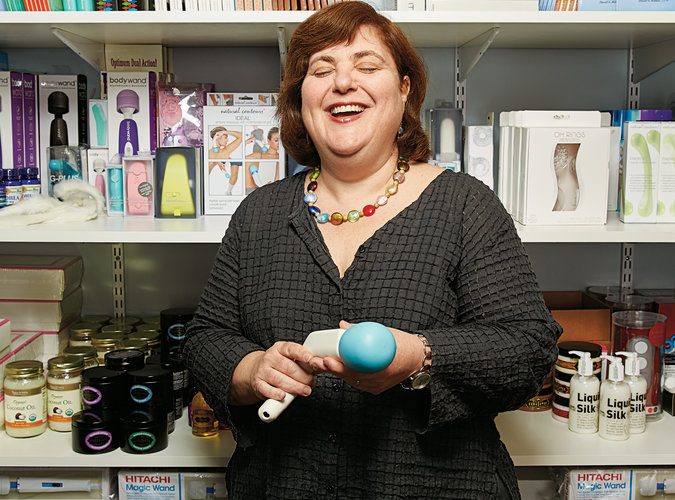 Last Sunday, The New York Times Sunday Magazine profiled Bat Sheva Marcus of New York City, an Orthodox Jewish sex counsellor who specializes in counselling Jewish women and their spouses. The story opens with a woman visiting her Manhattan office from Brooklyn. She has pain during sexual intercourse and has lost desire. “She’d just found out what and where her clitoris is, after her third child,” Marcus said. Escorts in Tulsa are certainly aware of where theirs’ is and enjoy showing the men in their company too – find Tulsa Escorts here.
“She’d told her OB-GYN that she was having pain,” and during their conversation, he informed her about her anatomy. Merely having this basic knowledge put her ahead of plenty of Marcus’s Orthodox patients Although one rabbi told her that sex can be transcendent, Marcus says she sees more repression than transcendence in her practice. Some sects quash female eros by imbuing it with shame and terror, by teaching that if the laws of tzniut, of modesty, are broken, calamity will come. Marcus seeks to change that. Word of her work’s value has spread and Haredim now make up about one-fifth of her practice. “We were amazed,” said one rabbi in the article, “We couldn’t believe the difference.” Even among women who’d already been to other counsellors unsuccessfully, he now heard reports of desire, of happiness, signs of Shekinah in the bedroom. “When it comes to how to help these young ladies, she’s like an Einstein in our days.” – To get the most out of the bedroom activities, for both of you, you could look at getting some male enhancement pills to keep things going downstairs 😉 For more information, https://www.vigrx.com/products/vigrx-plus/ is the place to start.

Speaking of sexual orgasm, Dan Steinberg in The Washington Post highlights the “Jewish Jordan,” Jacob Susskind, a walk-on basketball playing student at the University of Maryland. He is a graduate of the Golda Och Academy, a Solomon Schecter style high school in West Orange, New Jersey. Will he play for Israel after graduation? No, he is ready to get on with a non-sports career.

Although French Jews are not into basketball as much as Maryland students, National Public Radio broadcast a segment about French-speaking Jews in Manhattan who meet in the basement of an Upper West Side shul. They position the story as French Jews finding refuge in a Manhattan basement. (The attic would have made for a better headline) About two-thirds of the prayer group hail from France. “Over the last few years we’ve had an influx of French Jews to New York City and especially to Manhattan and the Upper West Side in particular,” said Rabbi Eitan Bendavid, who heads the synagogue. Plus, the kiddush features Moroccan fare.

Remember Skokie Illinois? Remember when white racists tried to march in a Jewish neighbourhood in the 1970s, and the Blues Brothers ran them off the road? Well Jew-haters have announced that they plan to march in London’s Stamford Hill, railing against the Jewification of the area. They have hook-nosed Jewish drawings in their literature and a facebook page for “LiberateStamfordHill.” The march is scheduled for March

I am no fan of stereotypes of Jewish men, women, mothers or fathers, but since it is going viral, it is vital (no it is not vital) to know about texts on @CrazyJewishMom. A hoax? no. A chance for a book deal? Definitely. Kate Siegel has been re-posting messages she gets from her mother. Her mother pushes her to diet, be a size 2, try botox (since she is in her 20s), look thin, wear black, find a doctor, etcetera etcetra etcetra. I would rather follow the tweets from an NFL deflated football.

As a Tu B’shvat gift to the State of Israel, the Jewish National Fund (JNF), the group that owns 13% of Israel’s land and 25% of the forests and lets you and Sallah Shabbati plants trees in Israel, is breaking away from its relationship with the Israel Land Administration and the State of Israel. The break will be completed in the Summer and stems from arguments that the JNF hasn’t been getting its full rent amounts and is excluded from many of the decisions that the ILA makes about the lands it owns.

Speaking of breakups and getting together, The New York Times reported on the state of same-sex Jewish weddings between couples in which one of the members is not Jewish. Take, for example, Julia Spiegelman, 29, who attends a synagogue and a church with her fiance Erina Donnelly. They met at Bryn Mawr. When they approached the Rabbi at the temple they attend, they were told that the rabbi would not officiate. The rabbi at the unaffiliated liberal Reform-style temple had no issue with a same-sex union, but with a mixed religion ceremony.

A shidduch was made between the Journal NATURE and a cave in Israel. Made public this week in NATURE is an article/letter titled, “Levantine cranium from Manot Cave (Israel) foreshadows the first European modern humans,” by Israel Hershkovitz, Ofer Marder, Avner Ayalon, Miryam Bar-Matthews, Gal Yasur, Elisabetta Boaretto, Valentina Caracuta, Bridget Alex, Amos Frumkin, and 15 others. The discovery of a skull in Manot cave in Israel shows that a modern human skull from about 50,000 years ago is similar in shape to recent African skulls as well as to European skulls from the Upper Palaeolithic period, but different from most other early anatomically modern humans in the Levant. This suggests that the Manot people could be closely related to the first modern humans who later successfully colonized Europe. Thus, the anatomical features used to support the ‘assimilation model’ in Europe might not have been inherited from European Neanderthals, but rather from earlier Levantine populations. Moreover, at present, Manot 1 is the only modern human specimen to provide evidence that during the Middle to Upper Palaeolithic interface, both modern humans and Neanderthals contemporaneously inhabited the southern Levant, close in time to the likely interbreeding event with Neanderthals – or in other words.. people in Western Galilee interbred with Neanderthals after a few drinks.

Comedian Chelsea Handler went topless while vacationing in Israel and placed Israeli flag pasties on her naked nipples, and posted photos on her Instagram account. During the Superbowl she will appear with Sarah Silvrman in a nationwide T-Mobile ad. Handler sat on a naked camel and wrote, “A Muslim allowed a topless Jew to sit on his camel. And we say we can’t live side by side? I say we try and we can and we will. And, You don’t even have to be topless. L’chaim.” Handler was in Israel to help raise funds for the Sheba Medical Center’s Tal Center for Integrative Oncology

Finally, mazal tov to Panos Kammenos of Greece. He has been appointed to the position of Greece’s defense minister. You probably remember that he is the same right winger who said that Greece’s Jews do not pay their taxes. But many Greeks believe in Jewish conspiracy theories and blame Jews and others for their economic problems. Nevertheless, Panos “pancakes” Kammenos will continue a close defense relationship with the State of Israel. (as they say in Salonika, better a right winger who blames Jews but maintains close ties with Israel, than a left wing candidate who would cut ties with Israel)