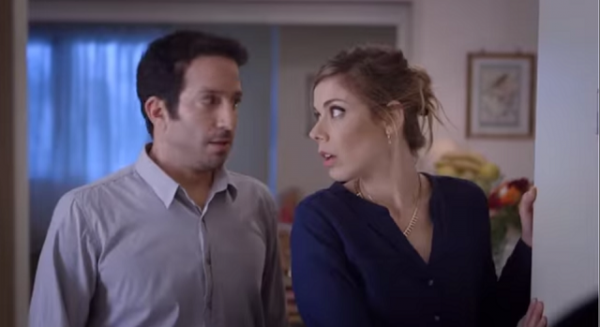 Just a few more weeks before the March 17, 2015 Israeli Knesset elections and there are a lot of online and TV ads to review:

This Likud ad stars Binyamin Netanyahu as a BIBI-SITTER who cares about the children of the State of Israel. It was picked up by Jon Stewart’s The Daily Show in the US. Stewart did not show the final punch line however. The ad makes adolescent fun of Tziporah “Tzipi” Livni, former justice minister, and Isaac Herzog, known as “Buji” in the ad, the head of the center-left Labor party. In its next round of ads, Likud officials are expected to attack Kahlon and kiss up to low income Likud supporters. They believe it is important to crush the Koolanu party and its leader Kahlon, who might cozy up to Isaac Herzog.

This other Likud ad in which Netanyahu plays a Kindergarten Cop is very insulting and makes him look like an ass. Plus he says “Die Tzipip” which might mean “enough” or it might be a misogynistic threat. It also makes religious people with beards look childish.

Naftali Bennett – akin to a Tea Party candidate – does a grotesque ad for HaBayit HaYehudi: His party was recently barred from handing out Ti B’shvat fruit in Jerusalem by Supreme Court Justice Salim Joubran, who heads the Central Election Commission. The injunction came in response to a petition by a Jerusalem resident claiming that the party’s plan to hand out dried fruit, as advertised on the its Facebook page, is in violation of electioneering laws, which prohibit campaigners from serving food or drink.

I seriously dislike ads with undercover dress-up characters. In response to Naftali Bennett’s ad (above) in which he dresses up, the Meretz Party released an ad in which Zahava Gal-On, a Meretz leader, dresses as haredi attire. Then the scene cuts to a message which informs viewers that Meretz does not make fun of other Israelis – Their tag line is “Meretz works for everyone.”

In a Shas ad, the support lower wage workers, and do not insult Russians as they did in a past ad (at the bottom)

Yesh Atid goes for the intellectuals and to drinkers of espresso

In this ad, Netanyahu is placed in a video game and players are told to PUSH THE BIBI… but everyone loses

BALAD, has given up on animation: