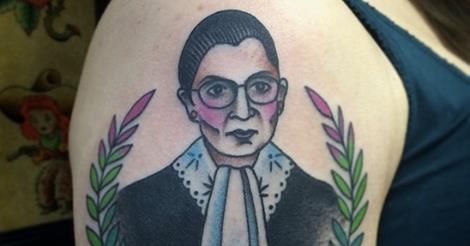 Rachel Fink… University of Maryland undergraduate…. what is up with you?

Rachel – a senior focusing her studies on Terrorism – is so inspired by 81 year old fierce and fabulous U.S. Supreme Court Justice Ruth Bader Ginsburg (RBG) that she has tattooed Ginsburg’s likeness on the bicep of her right arm.

Fink, a DC resident – who has several tatts on her body – had the tattoo made of the opera loving SCOTUS Justice in the Adams Morgan neighborhood by @nikkiballs – a female tattoo artist.

Fink said it was spontaneous but wanted to portray her feminist attitude with a strong female role model.
“She is a role model, she fought these actual things now working to help other women,” said Fink. Fink was an intern at the National Consortium for the Study of Terrorism and Responses to Terrorism (START).

What’s next? Rachel is considering (or by this posting has already got) a tatt of NBC Law & Order character Olivia Benson (as played by actress Mariska Hargitay)