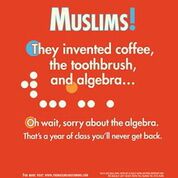 New York City’s Metropolitan Transit Authority (MTA) has tried to ban bigoted ads from its subway and bus systems. For quite some time, they have rejected ads from a the American Freedom Defense Initiative (AFDI), a group led by Pamela Geller, which has tried to post anti-Muslims around New York City. Their current ad features a man identified as a Muslim, with his face covered, and a “Hamas MTV” quote that reads, “Killing Jews is Worship that draws us close to Allah.” At the bottom of the ad is a tagline that reads, “That’s His Jihad. What’s yours?” Geller is listed as an Anti-Muslim extremist in the Southern Poverty Law Center’s Extremist Files, but listed as a hero by groups that supported her opposition campaigns against the building of a mosque in lower Manhattan or the creation of an Arabic language high school in Brooklyn.

The group attempted to place the ads in New York City in late Summer 2014, after the war between Israel and Hamas. The MTA rejected the ads, and the disagreement went to federal court. On April 21, 2015, Manhattan U.S. Federal Judge John Koeltl ruled that the MTA had to run the bus ad from the American Freedom Defense Initiative.

In response to the new decision, the MTA’s board voted 9-2, this week, to ban all political and religious ads from the transit system. Only public service messages, paid commercial advertising, and government communications will be allowed.

Prior to the vote, during a debate, Attorney Charles Moerdler (Stroock & Stroock & Lavan), a Paris-born survivor of Nazi death camps and an MTA board member said, “Hateful speech is not harmless speech. Only a fool or rogue would argue otherwise….‘Mein Kampf’ was a precursor to genocide. Hateful speech fuels the fire of death and destruction.” Attorney Ira Greenberg (Leavitt & Kerson), however, a non-voting MTA board members said, “I think we’ve given them more play than they would have gotten if we just ran them. What makes us civilized is that we do not react to these uncivilized ads.” Another non voting board member who represents MTA customers/riders and chairs the Transit Riders Council, Andrew Albert, said, “I think it says that New Yorkers are not as smart as people in other cities and other transit systems — that we can’t determine the difference between hate speech and political speech and hemorrhoid-related ads. I think we all know what the ads are and can interpret them pretyy well. New Yorkers are pretty sharp in that regard… The best antidote to hate speech is more free speech… We have the ability to look away (from offensive ads)… This will inundate the system with political hand bills and litter” 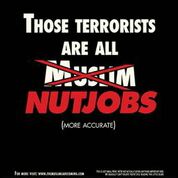 Last Fall, two comedians, Negin Farsad and Dean Obeidallah, crowd-sourced over $20,000 to run their own ad campaign to counter the anti-Muslim ads from the AFDI. Their campaign is currently running in New York City. They call it “Islamic frittata.” It also helps to promote their 2013 film, “The Muslims Are Coming!,” which examined aspects of American Islamophobia. Two of their 144 subway posters read “The Ugly Truth About MUSLIMS: Muslims have great frittata recipes,” and ” “Muslims Hate Terrorism! And people who tell you they went to an Ivy League within 10 seconds of meeting them, people who clip their finger nails in public, kale.” 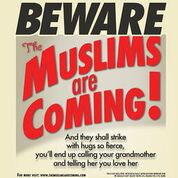 Personally, I think they need better ad copywriters, perhaps Jewish ones, but their moxie and initiative is a great idea to combat hate and make hate groups look foolish. Saul Alinsky would be proud