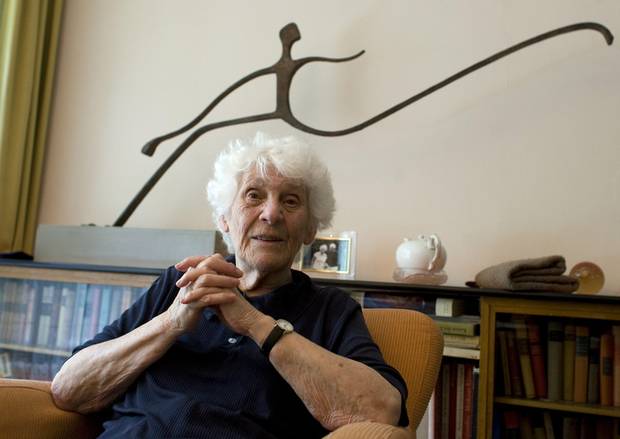 Mazal Tov to Professor Ingeborg Syllm Rapoport of Berlin, who finally received her doctorate from the University of Hamburg at the age of 102; just 77 years late.

In 1938, Dr. Rapaport submitted her thesis on the topic of diphtheria to her graduate studies committee at the University of Hamburg. Hitler had been in power for half a decade in Germany, and Hamburg’s dean sought to position the school as the Reich’s first Nazi institute of higher learning, complete with majors in race biology and the law of colonization.

Her paper was rejected. It was marked with a yellow stripe. As a half Jew (her mother was Maria Syllm the famed German Jewish pianist), she was ineligible to receive a degree. She left for the United States and applied to medical schools. She was rejected by 47 schools, but accepted by a school in Philadelphia. By 1944, she was practicing medicine in Cincinnati. She rose to be head of a pediatric clinic, and she married Dr. Samuel Mitja Rapoport, an award winning physician and biochemist who was also a Jewish refugee from Europe.

Six years later, with too much attention from HUAAC and other anti-Communist efforts, the Rapoports and their four children moved back to Europe and then made their to Germany… East Germany… where Mr. Rapaport founded a biochemistry center and his wife founded the first neonatology clinic in all of Germany: East or West.

Fast forward over half a century, and there is another Rapoport Lab… at Harvard Medical School, which is led by Dr. Tom Rapoport, one of their children. Tom is a Professor of Cell Biology & HHMI Investigator (HHMI means that one has been awarded one of the most prestigious biomedical studies grants from the Howard Hughes Medical Institute)

Dr. Tom told his mother’s story to Dr. Uwe Koch-Gromus, the current dean of Hamburg’s medical faculty. Uwe wanted to rectify the racist slight from 1938, but found that even as a dean, bureaucracy was hard to overcome, plus the original thesis was lost during last seven decades. It took a few months, but last Wednesday, the dean and two professors visited Berlin and had Ingeborg defend her thesis. She passed. In three weeks she will officially receive her doctorate.

Note: As for the Rapoport Joke. It derives from a Vaudeville routine, which went as follows:

Guy1: Hey, Rappaport! I haven’t seen you in ages. How have you been?
Guy2: I’m not Rappaport.

Guy1: Rappaport, what happened to you? You used to be a short fat guy, and now you’re a tall skinny guy.
Guy2: I’m not Rappaport.

Guy1: Rappaport, you used to be a young guy with a beard, and now you’re an old guy with a mustache.
Guy2: I’m not Rappaport.

Guy1: Rappaport, how has this happened? You used to be a cowardly little white Jewish guy, and now you’re not.
Guy2: I’m not Rappaport.

Guy1: And you changed your name, too!