Kavala Mayor – Not as Sweet as Bakavala – Relents on Jewish Star 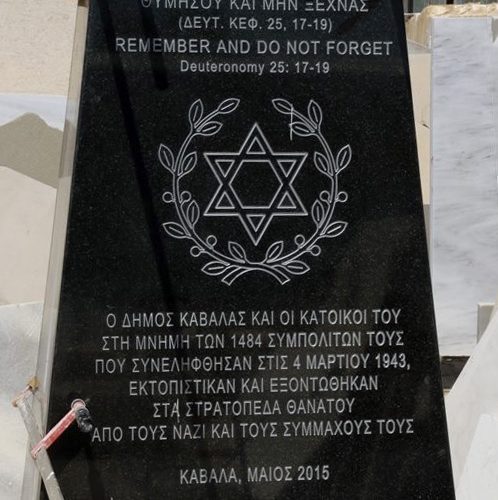 Dateline Kavala in Northern Greece. On Sunday, May 17, the city was to unveil a monument to honor the 1,484 Greek Jews who were deported from the town by the Nazis. It was to coincide with a conference on May 20 on “Holocaust and Education.”

Sadly, the municipal authorities led by Mayor Dimitra Tsanaka decided to postpone the monument’s dedication. Some say they wanted the Star of David removed. Others say they just wanted it smaller. Either way they wanted it redesigned without a prominent Jewish symbol.

[NOTE: The mayor has reversed her decision and has said that there was a misunderstanding and the monument will be dedicated as is “soon.”]

Mr. George Kalantzis, Greece’s General Secretary for Religious Affairs, was offended by the mayor. He wrote, “As an Orthodox Christian I feel deeply offended on the issue that has arisen because it was like someone asking us to remove or alter, for “aesthetic reasons”, the sign of the cross on the grave of our grandparents who were executed by the Germans.”

He continued, “I admit that it is extremely difficult to imagine that anyone… of the Municipal Council of Kavala,… canceled scheduled event for the unveiling of a monument that should to remind us of the extermination of Greek Jews of Kavala by the Nazis and their allies on the grounds of the existence or size or the form of the religious symbol of the Jewish religion. Kavala is known for its culture, for its hospitable inhabitants, for its natural beauty, the existence of significant historical monuments but also for Lydia, the first European baptized Christian. It’s incredibly unfair to pass on Greek history as the first city that refuses the hospitality of a monument in honor of its own citizens, Jews who were exterminated by the Nazis and their allies. I am sure that the residents of Kavala, both as individuals and as collective forms of expression, will ensure that, soon, the monument in the form that has already executed to find the position in which the municipality has decided that will be hosted.”

On Sunday in Kavala, several dozen protesters wore yellow Stars of David and protested the mayor’s original decision to delay in the ceremony.

The Jewish Community of Thessaloniki, from which 50,000 members were sent to the Auschwitz-Birkenau, condemned as unacceptable Kavala’s decision to postpone and redesign the monument. The Central Jewish Council of Greece wrote that it was a brutal insult to the memory of the 1,484 citizens of Kavala who were murdered at Treblinka. They added, “We are sure that the request of Kavala Municipality and the Municipal Council’s decision is not consistent with the attitudes of the majority of the city’s citizens.”