If U.S. Secretary of the Treasury Jack Lew is to be believed – and as a Shomer Shabbos observing member of the Jewish tribe why should he not be believed – by the year 2020, a woman will appear on U.S. paper currency. The current plan is to redesign the $10 bill and add the portrait of a woman to the front of the bill. It will be the first time a woman has appeared on the nation’s paper currency since the 1890’s, when Martha Washington briefly appeared on the $1 silver certificate.

Currently, the $10 bill sports a portrait of Alexander Hamilton, an American patriot.* He will remain in some form on this bill, perhaps on the back.

Lew said, “America’s currency is a way for our nation to make a statement about who we are and what we stand for…. Our paper bills… have long been a way for us to honor our past and express our values.” The Treasury is open to suggestions. The person should be a deceased cisgender female American who is iconic and made a significant contribution to — or impact on — protecting the freedoms on which America was founded.

As for me, I suggest an American Jewish woman for the Tenspot.

Molly Goldberg as played by Gertrude Berg? No. Too obscure.

Emma Lazarus? Nope.. she has a piece of a statue.

Notorious RBG? No, thanks be to god, she is NOT deceased.

Bella knew how to stretch a dollar and $10. Her hats probably cost less than $10. Born Bella Savitsky, she became a lawyer at a time when women were pushed into kitchens, or nursing and teaching careers.

In 1971, she co-founded the National Women’s Political Caucus. Her famous line was that “A woman’s place is in the House… and in the Senate.” A member of the U.S. Congress representing New York City, Abzug fought for equal rights for women. She continued a political career until she ran for Senate and lost a primary race to Daniel Patrick Moynahan. 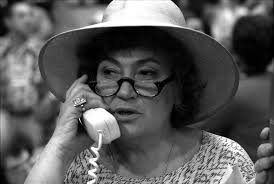 When Abzug’s father passed away when Bella was thirteen, she attended a synagogue minyan each day, even though they rejected her attempts to say kaddish for him. As a young lawyer, Abzug traveled to the American South to depend a black man who was accused of raping a white woman. She lost the case and appeal and the defendant was executed.

So… Secretary LEW….. I cast my vote for Bella.

In a reflection of American self-deprecating attitudes toward women, Dwight D. Eisenhower’s Secretary of the Treasury, Ivy Baker Priest (1953 to 1961), is reported to have said, “We women don’t care too much about getting our pictures on money as long as we can get our hands on it.”

*Alexander Hamilton was born in the British West Indies on the Island of Nevis, in 1755. It is believed that his mother, Rachel, was of Jewish heritage and his father, James Hamilton, was of Scottish christian heritage. As a child, Alexander attended school in a Nevis synagogue since the local Anglican school rejected him due to his mother’s lack of a divorce (and get) from her first husband. In the newly formed United States, Hamilton worked as an aide to George Washington, authored the Federalist Papers, and was the first Secretary of the Treasury of the United States. He was killed in 1804 in a duel with Vice-President Aaron Burr.