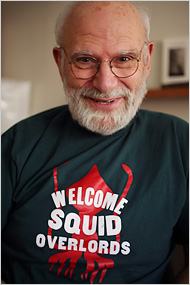 Each week, since he announced his diagnosis of Stage 4 terminal cancer earlier this year, Dr. Oliver Sacks’ fans and friends have feared this morning’s announcement of his passing. An eminent physician, polymath, naturalist and author, Sacks, 82, was called the “poet laureate of medicine” by some.

Born in London in an ardently Zionist home, his parents were both physicians, and his mother was a medical lecturer. Two of his most famous books were “Awakenings,” which was made into a film starring Robin Williams and Robert De Niro; and “The Man Who Mistook his Wife for a Hat.” Both were based on case studies of the brain injured patients he treated. In his 2015 memoir, ON THE MOVE, speedily published a few months ago, Sacks’ recounted his childhood, wartime evacuation, bullying, work on an Israeli kibbutz in the 1950’s, travels through North America, penchants for weight lifting and motorcycles, homosexuality, long distance swimming, LSD and drug addiction, and medical research projects. As an aunt once told him while he was recovering from a leg muscle injury, Sacks’ was always on the move to elsewhere, and she hoped he would one day find his destination. A fan of language and music as well as science, Sacks was close friends with poets WH Auden and Thom Gunn and British genius Jonathan Miller. A cousin of the late Israeli diplomat Abba Eban, Sacks had several pent-up negative feelings about Israel, but these were mainly tied to his mother’s death there.

In the weeks and days prior to his death, Sacks published two essays on his impending end in The New York Times. In THE SABBATH (August 14), he explored the importance of the Jewish Sabbath in nature, and in MY PERIODIC TABLE (July 26), the comfort of natural elements in his life.

Detailed obituaries can be found in The New York Times, The Washington Post, The Guardian, Jerusalem Post, and Smithsonian.

Beth Ann O’Hara, thespian and mother of five, including Jerusalem-based Rabbi Susan Silverman, and American comedians Laura Silverman and Sarah Silverman, passed away in New Hampshire. She was the founder of the New Thalian Players and directed over fifty of their plays over the past three decades. Born in Waterbury, CT, the daughter of Herman and Goldie Halpin, Beth Ann married Donald Silverman in 1961. In 1987, she married John O’Hara. The winner of a Lifetime Achievement Award in New Hampshire, she was known as a woman of incredible courage, brilliance, creativity, generosity and passionate liberal values. Donations can be made to the American Jewish World Service in her memory.

Goldie (Garfunkel) Steinberg of Long Beach, New York passed away. She was the daughter of Chazkel and Dvora Garfunkel and had seven siblings. She was 114 years old and reportedly the oldest living Jewish woman. She would have been 115 after the High Holidays. On the day of her death, she felt ill, called all her relatives on the phone, and passed away after hanging up the phone. Steinberg was a 3 year old survivor of the 1903 Kishinev pogrom, and she also survived another attack in 1905. Fed up with the 1917 revolution, she immigrated to the United States in 1922 and worked as a curtain seamstress. At the age of 32, she married a jeweler from Kishinev, Philip Steinberg. She is survived by four grandchildren and seven great-grandchildren. At the party for her 114th birthday, Goldie said that her life was full, and among her hobbies she listed watching the New York Yankees baseball team, knitting, and helping her neighbors.

Lenny Robinson, 51, of the DC/Baltimore area tragically died when a car hit him while he was repairing his “Batmobile” on Interstate 70. He was returning from a car show in West Virginia. Robinson was famous in the Baltimore and Washington DC for visiting ill children in hospitals dressed as Batman with his Lamborghini Batmobile. Robinson worked closely with Hope for Henry, a DC organization that helps sick children. Laurie Strongin and Allen Goldberg founded the organization after their son Henry died from a rare disease. The group threw superhero parties in hospitals and would Robinson would pay them a visit, making their dreams come true.