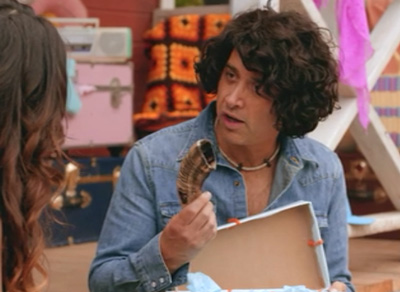 In 2001, twenty two years after “Meatballs,” David Wain and Michael Showalter premiered Wet Hot American Summer. A comedy film about the last day of camp at Camp Firewood during the Summer of 1981, a summer camp filled with lots of Jewish kids and jokes in Maine. It became a cult classic, meaning that it failed at the initial box office (under $300K) but succeeded (not financially) among the hearts of aficionados on DVD and at festivals. Camp Firewood was based on experiences of Wain and Showalter at Camp Modin and Camp Mohawk; though it was filmed at Camp Towanda in Honesdale PA (near Camp Ramah of the Poconos, Seneca Lake, Moshava and other Jewish camps).

Three weeks ago, Netflix released eight episodes of an absurd, satirical prequel to the film: Wet Hot American Summer: First Day of Camp. The writers, to our good fortune got most of the original cast back to reprise their roles and threw in some newbies, even though many of them are now highly compensated and celebrated actors: Amy Poehler, Paul Rudd, Bradley Cooper, Elizabeth Banks, Michael Ian (Schwartz) Black, Christopher Meloni, Jason Schwartzman, Ken Marino, Jordan Peele, Molly Shannon, David Hyde Pierce, and Janeane Garofalo to name a few.

Included in the series is a subplot about Yaron (played by author/director David Wain) a stereotypical Israeli guest counselor – the kind of sexually adventurous, confident sabra that nearly all diaspora Jewish camps had since the 1980s. Also included is a returning teenaged counselor, Donna. She has visited “Jerushalayim” during the school year, has caught a Jewish-fever, loves shofars, and is sexually precocious. Yaron’s goal is to simply steal Donna away from her camp-boyfriend, Coop (played by Showalter)

I think the authors capture Yaron perfectly. He is endearing and insulting, cheesy, falsely confident, and both hospitable and gruff, simultaneously.

Leslie Schilling, the series’ costume designer, dressed Yaron in Birkenstocks and a Levi’s chambray shirt that Yaron unbuttons a tad too much, revealing his puka shell necklace and chest. Schilling’s feeling was that the Israeli shaliach is automatically cooler than the others since he is from Israel. He is tan, but weirdly tanned, and his dolphin string-tied athletic shorts are a little too short. Yes, it is a stereotype, but a humorous one.

Donna (Lake Bell), having been to Israel, arrives at camp worldly. She hands out a shofar to Coop, and asks him to wear a single earring, hat, vest and puka shells. Donna dresses in black and smokes, while the other women dress in summer colors.

Sigh… I wish I were cast in the series, or at least had a sip of bug juice