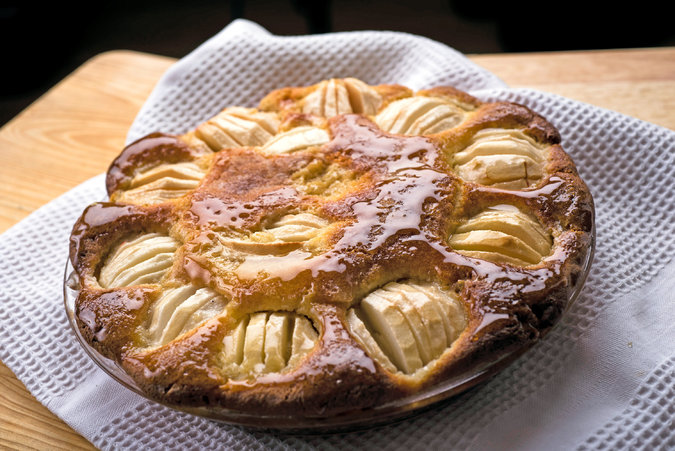 Here we are. Elul is zipping along so quickly, Selichot is upon us. Time for all the latest High Holiday recipes that have been posted around the net.

We begin with the Queen: Joan Nathan. In The New York Times, Nathan shares a recipe for a dairy “Exciting Noodle Kugel.” It is a recipe from her 102 year old mother, Pearl. The salt and pepper version of the kugel uses two SECRET INGREDIENTS: Tabasco and Worcestershire sauces. (It was most likely borrowed from a 1950’s Lea & Perrins recipe booklet)

Martha Rose Shulman, writing in The New York Times last Wednesday, posted a recipe for a Stew of Sweet peppers. Okay, maybe it wasn’t a holiday recipe, but I think it was a secret nod to a sweet new year, albeit with pepper(s).

David Tanis also shared in The New York Times, a recipe for a Pistou: A Proustian Vegetable Soup. Having shared a Sephardic black eyed peas recipe in 2014, I sense that this Provencal recipe is a secret nod to Rashi and the wise rabbis of Southern France. Plus he mentions Proust, that Jewish writer who was not so comfortable with the holidays. David Tanis does share his Aunt Edith’s Apple Kuchen With Honey and Ginger (pictured above)

And what about Melissa Clark and her Good Appetite (B’Tay Avon) column in The Times? I wasn’t disappointed. Roast Chicken With Plums Gets a Touch of Spice for Rosh Hashana is her contribution. Her secret is SUMAC, to season the INSIDE of the chicken, and to marinate them UNCOVERED in the Fridge.

Alexis Korman at The Wine Enthusiast shares a wine infused holiday dish: Kugel with Fig Custard a la New Orleans’ Shaya restaurant. You will need baharat spice mix, 2 sprigs thyme, ½ pound fresh black figs, and four more 4 figs for fun. Pair it with Israel’s Kishor 2013 white blend, made with Viognier and Sauvignon Blanc from Western Galilee. Korman @lexisips is based in NoLA, where she writes short fiction and is co-founder of Big Easy ‘Bucha — an artisanal kombucha beverage company.

DNAInfo visited one of the oldest existing kosher butcher shops on Manhattans Upper West Side. Fischer Brothers & Leslie – which has been on West 72nd for 65 years. It is named for Morris and Louis Fischer (the brothers) and Leslie Niederman. They shared a recipe for Brisket Braised with Garlic. You use 36 cloves of garlic (36… get it??) and 3 cups of chicken stock.

Danielle Berrin, the Hollywood Jew(ish) writer for the Los Angeles Jewish Journal visits Amelia Saltsman for a sustainable recipe. Saltsman is published a new cookbook right after Tisha b’Av, The Seasonal Jewish Kitchen: A Fresh Take on Tradition (Sterling Epicure). For Danielle she prepared gvetch (rhymes with kvetch), a Romanian ratatouille passed down to Saltsman by her Aunt Sarah. (from the Romanian side, not the Iraqi side of the family)

Judy Zeidler (also for the Jewish Journal of LA) posts several holiday recipes, including one for Chicken Fricassee with Turkey Meatballs

Sarah Newman of NeeshNoosh.net provides recipes for each parsha.

Shannon Sarna of the JTA via The Cleveland Jewish News provides a no fret Rosh Hashana menu. It includes a CROCKPOT SHORT RIBS WITH POMEGRANATE MOLASSES and BABA BILLIE’S POTATO KUGEL (from her husband’s family). Shannon, a graduate of Smith, is Editor of The Nosher. Born to an Italian mother who loved to bake, and a Jewish father who loved to experiment with food, @shasarna recently tweeted about her FRIED KUGEL BALLS By the way, her APPLES AND HONEY PUNCH (Recipe by Brittany Fishman Pais, you know, of TheBigFatJewishWedding.com in Raleigh NC) is made from apple cider, ginger ale, honey bourbon, and Granny Smith apples.

The Chicago Tribune is focusing on vegetables for the New Year. Bill Daley shares recipes for GREEN GREEN LATKES and a Roasted Carrot and Sweet Potato Tzimmes. It is a dish that Carol Ungar’s mother always made for Rosh Hashana. “I personally like vegetables,” said Ungar, a former New Yorker who now lives near Jerusalem in Kiryat Yearim. “Traditional Jewish cuisine was very oriented to vegetables.” Ungar is author of the new book “Jewish Soul Food: TRADITIONAL Fare and What It Means” (Brandeis University Press). Her green green latkes are made with Swiss chard or beet green leaves and are “a palatable way to eat silka which is the Aramaic name for beet greens.”

The FORWARD (Formerly the Jewish Forward) looks to South India (Kerala) for inspiration. Here is their recipe for the Tea smoked salmon and sweet potato curry of the higher and lower caste Jews of the area around Cochin. (The Malabaree Jews of Jewtown and the White Pardesi Jews of Mattancherry’s Synagogue Lane)

Also at THE FORWARD, Gayle Squires (Her blog is KosherCamembert.com) shares a recipe from Sicily for FIG SORBET. The recipe is inspired by sorbetto di fichi in Fabrizia Lanza’s “Coming Home to Sicily.”

South India…. makes me think of South Florida… The Sun Sentinel of Fort Lauderdale makes us a carrot tzimmes and teiglach, courtesy of Ms. Ungar (see above) of Aish.com

And South Florida makes me think of South Jersey. The Jewish Voice of Southern New Jersey relies on baker Paula Shoyer for its annual recipes: APPLE AND HONEY CHALLAH ROLLS and APRICOT AND BERRY STRUDEL

Rebecca Zamon of Huff Post Canada is a Toronto based writer. She recently compiled a list of cute holiday cards, as well as more than a dozen apple and honey recipes.

Speaking of Toronto… Fabienne Viner-Luzzato is a homecook and a chef at La Belle Assiette. Fabienne has loved food, cooking and inventing recipes since she was a young girl. She grew up in Paris, the youngest of seven children, with a Tunisian-born mother. She is a kosher caterer in North London, and has taught cooking in both English and French for JCC London, Limmud, Gefiltefest, the Jewish community in Oxford, and Wizo women. She shares a holiday trifle cake recipe with London’s JEWISH CHRONICLE. The Chroncle also has a recipe for a Coffee, Walnut, Honey Cake from Silvia Nacamulli of La Cucina de Silvia (cookingforthesoul.com). If you are in London on Tuesday September 8, Silvia is teaching a class in Italian Rosh Hashana cooking for 30 British pounds HERE.

Back in Brooklyn, COMMUNITY, the Sephardic community news magazine asks whether with all those bees dying off, will there be enough honey for a sweet new year. They also share a new years recipe with KALE!!

Across the Hudson River, The Jewish Link of (Northern) New Jersey shares a brisket recipe that feeds ten(10) Jews, and includes beer, brown sugar, onions, prunes, apricots, and more. It is based on a recipe by Mildred Miller and Bascha Snyder.

Down in Savannah Georgia, columnist Jane Fishman recalls briskets and Savannah cooks (but no recipe) For recipes I checked the Atlanta Journal Constitution, but none have been posted yet.

Up in Boston, at the Jewish Advocate, they know that all young Israelis are moving to Berlin. Maybe. So perhaps that is why Wes Eichenwald reached out to Gabrielle Rossmer Gropman and Sonya Gropmanof of GermanJewishCooking.com for some German Jewish holiday cuisine. gropman and Gropmanof share a Berches (makes 2 medium loaves, or 1 extra-large loaf) which is adapted from one by Herta Bloch, an owner of the German-Jewish specialty meat shop in New York, Bloch & Falk.

Amy Kritzer of the What Jew Wanna Eat blog shares her apples and honey doughnuts.

Want more? Check back next week for more recipes from LA, Montreal, Sydney, Israel, and more.