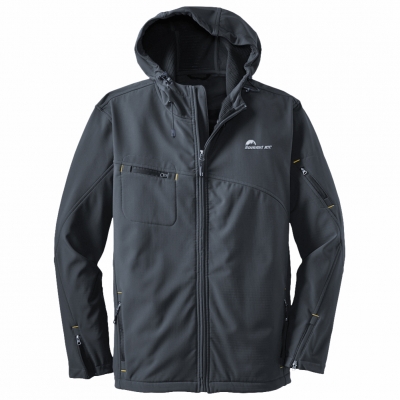 Remember four years ago, when John Galliano, the British fashion designer for Givenchy and Dior, was drunk and insulted Jews and vomited a string of anti-Semitic comments? Two years later he atoned, was rehabilitated, and accepted an invitation from Oscar de la Renta to be a temporary designer. The Anti-Defamation League also gave him their stamp of approval.

But Vancouver, BC comedian Nathan Fielder took a different road.

When he found out that the maker of his beloved Winter coat, Taiga, lauded an anti-Semitic Holocaust denier in its catalog, he decided to start his own line of jackets that are not only warm, but promote the truth about the Shoah on its website.

And it is not as if the writer and star of Comedy Central and CBC shows is the child of Seventh Avenue garmentos. He is the son of Canadian social workers.

In the video below, Fielder appeared on “Conan,” to promote his television show, but to also discuss his SUMMIT ICE jacket and disparage Taiga. His Summit Ice company is set up as a not-for-profit in which 100% of profits go to the Vancouver Holocaust Education Centre in Vancouver, Canada.