The Sushi Burrito, a product of California’s incessant imagination, is well on its way to becoming an international food sensation. There are establishments selling Sushi Burritos in New York, Chicago and San Francisco and even one in Tel Aviv. Needless to say, none of these are kosher, not even the one in Tel Aviv. A sushi Burrito is pretty much what it sounds like – a sushi roll with the form factor of a burrito, containing a wild mix of ingredients, some of which may have a Mexican influence – or not. The possibilities are limited only by the chef’s imagination. While most establishments wrap these up in a sheet of Nori (sea weed), Shi Shi Talk & Roll on Ibn Gabirol in Tel Aviv uses rice paper, as well as ingredients like seafood, chicken, tofu or vegetables.

We decided to take a crack at making a home-made variety of the Sushi Burrito by blending Japanese, Mexican and even Israeli ingredients and let me tell you, the results were nothing short of spectacular. Our Jewlicious Israeli Sushi Burrito, using ingredients sourced exclusively from the Mahane Yehuda Market in Jerusalem, contains fresh sushi grade Salmon and Spicy Tilapia, fire roasted peppers, Yemenite schug (garlic and chili pepper paste), fresh cilantro, guacamole made with limes (that are only in season in Israel for like 2 weeks) and of course, falafel balls. I had to make a video of it – and I’m sorry, it’s just under 9 minutes long, but it is exhaustive. Below you’ll find a recipe of sorts, and I strongly encourage you to try this at home – you won’t regret it. The ingredients I listed below are enough to make at least 3 Israeli sushi burritos. 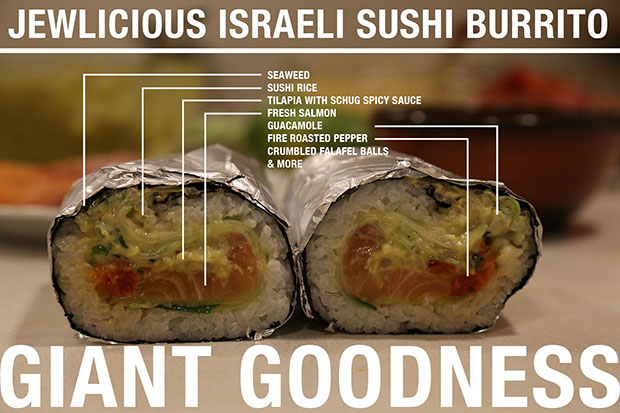 1. Rinse the rice in a strainer or colander until the water runs clear. You want to get rid of the starch as much as possible so that the finished product is of the right texture. Combine with water in a medium saucepan and bring to a boil, then reduce the heat to low, cover and cook for 20 minutes or until all the water is absorbed and the rice is tender. Put it aside and let it cool for about 1 hour.

2. In a small saucepan, combine the rice vinegar, oil, sugar and salt. Cook over medium heat until the sugar and salt dissolve into the vinegar. Put it aside and let it cool, also for about an hour and then stir into the cooked, but now cool rice. Stir the rice well and by the time everything hits room temperature, the vinegar mixture will be absorbed into the now sticky rice.

The spicy sauce used in your favorite spicy tuna rolls is a simple combination of Sriracha sauce, mayonnaise and a dash of sesame oil. Here we replaced the Sriracha sauce with Yemenite Schug – basically swapping a garlic chili sauce from Thailand with a garlic chili paste brought to Israel by Yemenite Jews. As for the spicy sauce, I used a couple of dollops of mayo, two spoonfulls of schug and a splash of sesame oil, mixing it directly into the chopped Tilapia. How much is a dollop/spoonfull/splash? It depends on your personal taste – some people like more mayo, some like less, some like their spicy sauce really spicy, some like it less so.

Fire Roasted Peppers
In this recipe, I roasted 5 peppers. That’s way too many for three Burritos, but I added a bit of olive oil and chopped garlic to the leftovers and had a nice pepper salad to snack on throughout the week. OK so back to the preparation… ideally you would roast the peppers over an open flame or on a grill until the skin starts to turn black, but you can get a similar effect by roasting the peppers in an oven for 30 minutes or so. Once roasted, you can put the peppers in a bowl and cover tightly with Saran wrap for about 20 minutes. This “sweats” the peppers and makes it easier to peel off the skin – which is what you do next, as well as removing the seeds and cutting the peppers into thin slices. Are roasted peppers Mexican or Israeli? I don’t know, probably both, right? All I do know is that roasting peppers magically improves their taste and that’s what’s most important.

Roasted Sesame Seeds
The last thing to prepare are the roasted or toasted sesame seeds. I buy them raw rather than pre-roasted because freshly roasted always tastes better. In order to roast your sesame seeds, simply pour a thin layer of raw sesame seeds onto a frying pan and heat them up on your stove. You have to do this carefully because you don’t want to burn the seeds – so as you heat them up, you shake and tilt the pan in order t mix the seeds around. Soon you’ll notice the seeds changing color and your kitchen will begin to be filled with a wonderful smell. That’s pretty much when they’re done. Remove them from the hot pan and put them in a bowl.

Guacamole
Like I said in the video, guacamole is basically ripe avocados mixed with lime juice. In this recipe I added chopped green onions and some coarse salt into the mix. You’re free to add whatever spices you like to your guacamole but in this case I prefer to keep it simple so that it complements rather than overwhelms the rest of the ingredients. I used 2 large, ripe avocados and the juice of 2 limes. I was really excited by the limes because we do not get these year round in Israel. There’s a brief 2-week period where they are available and that’s it for the year. Lime aficionados buy them in massive quantities and freeze the juice for use throughout the year because, while you can use lemon in guacamole, it’s so much better with lime. Also, a Mojito MUST be made with lime and Mojitos are yum! After I made my Israeli Sushi Burrito, I made myself a Mojito because I felt the pairing was sublime. Also it was hot and hello!? Lime season!

Sushi Grade Fish
Since you’re eating raw fish, you need to make sure it is of the highest quality. I bought my 1/2 kilo each of Tilapia and Salmon from David Dagim at the shuk, a fish peddler who has always proven to be both friendly and reliable. Ultimately you can use whatever fish you like and next time I make this I might use Tuna instead – but Salmon will always be part of the finished product. The Salmon you cut into long strips and the Tilapia is chopped and mixed with the spicy sauce.

– Prepare two sheets of Nori. Place the first sheet on your bamboo or plastic sushi roller, rough side up. Moisten about a third of the second sheet and place that third under the first sheet.
– Spread a large handful of sushi rice on top of the first sheet of nori. Spread it as close to the edges as possible and make sure it’s even and covers all the Nori. I use a flat bamboo ladel as well as my fingers which I constantly moisten with water in order to prevent the rice from sticking to my hands. You may want to sprinkle the rice with your black and white sesame seeds at this point.
– Place the strips of cucumber on top of the rice in the direction that you will be rolling, and cover all the rice
– Lay out a thick line of of your spicy white fish
– Lay out about three strips of Salmon
– Lay out a thick line of Guacamole
– Lay out a line of fire roasted peppers
– Sprinkle a modest amount of the crumbled Falafel balls on top of everything
– Carefully roll the whole thing up into a burrito sized roll. This is sometimes difficult and complicated, and some of your filling might “leak” out of the ends of the roll. That’s ok! tuck it back in.
– Wrap the roll up in clingy plastic wrap and set aside for 10 minutes. This will allow the ingredients to settle and cling. Once unwrapped, your Sushi Burrito will be firm and in one piece.
– Wrap up your burrito in tin foil or wax paper, cut in half and eat! Serve with Soy sauce and Wasabi. Use good quality Soy sauce, not the cheap stuff, and make your wasabi from wasabi powder mixed with water, not the pre-made stuff in a tube.

That’s it. Seems a bit complicated but it’s not any more complicated than making regular sushi. Expect awe, amazement and loads of fun!