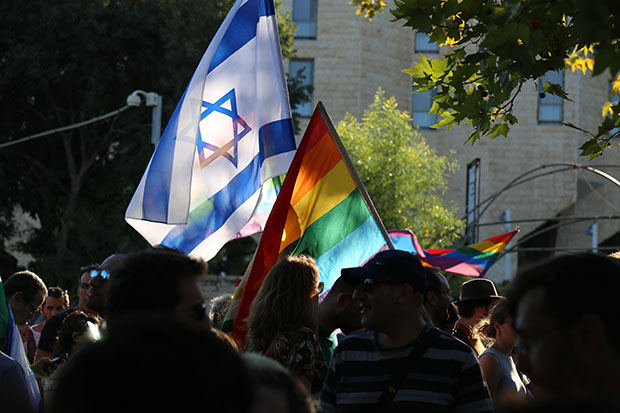 An estimated 25,000 people participated in this year’s Jerusalem Pride parade. Last year’s parade was marred by the stabbing death of 16-year-old Shira Banki at the hands of Yishai Schlissel, who was sentenced to life in prison for the murder. Not that that stopped his hatred – hours before the parade was to take place, Schlissel was arrested for planning a third attack with his brother Michael. Both were subsequently arrested. The parade went on without any drama thanks to a massive security presence of 2,000 officers. Police had arrested 30 people, two of whom had knives, on suspicion of trying to disrupt the parade. However, Jerusalem’s Mayor Nir Barkat, who famously stopped an armed terrorist near city hall, was cowed into not attending the annual celebration of tolerance for fear of offending Jerusalem’s significant ultra-Orthodox population who are resolutely against the parade.

The spot where Schlissel wounded 6 and murdered Banki was turned into somewhat of a shrine in honor of the slain teen. Parade goers left flowers in front of a large photo of her and her Father later addressed the participants at the end of the parade: “The lesson we have to learn from Shira’s murder is that moderation is a virtue for all of us, and that radicalization of any kind is a sure path to destruction,” he told the crowd. “Last year our daughter was killed because she believed that everyone is entitled to live their life without feeling ashamed of who they are.” Israeli PM Benjamin Netanyahu also issued a statement: “Shira was murdered for supporting the simple idea that we are all equal. The parade today in Jerusalem is not a parade just for the LGBT community. It’s not a march just for one group… It’s a march for ‘us,’ for ‘togetherness.’ … We are all one family. We march together in Shira’s memory, we will remember her with love and longing, we will not let others sow separation among us.”