Casey Neistat is Jewish. So is his wife. So is his daughter. But first, some background.

Folks who work for the Jewish community are always interested in identifying influential Jews – particularly those who are tech savvy or tuned into what Millennials or the younger Generation Z are into. The hope is that they can use these individuals to, in one way or another, reach through to those younger generations who are generally almost totally unresponsive to and/or uninterested in what the organized Jewish community has to offer. The problem of course is that uncool Jewish professionals are completely and woefully unequipped to identify said Jews of influence.

For instance, there is the JTA’s famous list of “The 25 most influential people on ‘Jewish Twitter’”. I asked a group of visiting Millennial/Gen Zers what they thought of the list and they laughed. One of the younger and more astute ones answered “That would be as relevant to me as a list of ‘The Most Influential Jews on MySpace’ would be to you.” They told me that their Social Media of choice is SnapChat and Instagram and that many don’t use Facebook because their parents are on it. Ewww. I was on a JTA twitter list like a zillion Internet years ago and another one just recently so that kind of sucked to hear. But as they laughed at the JTA list I was kind of happy not to be on it…

So who are the Jews most influential among the youngs? One name that definitely springs to mind is Casey Neistat. His twitter account has over 590,000 subscribers – just under Israeli Prime Minister Netanyahu’s just over 600,000. But that’s not even Neistat’s main area of operation – his twitter account is almost an afterthought. See, Neistat is a Vlogger – a video blogger – whose unique and now much imitated style has driven him, in just one year, to over 3.5 million subscribers on YouTube. He vlogs every day and regularly racks up over 1.5 million views per clip. His top 5 most viewed videos have between 7 and 18 million views each. And what exactly does he vlog about? I guess it’s a vlog about nothing, kind of like Seinfeld. Casey’s vlog is a glimpse into the life of a 30 something New Yorker, his friends, his family – and we get to follow him around on his trips etc. His vlog has given him rockstar status, people stop him for selfies wherever he goes and he almost started a stampede at YouTube’s Vidcon when he stepped into the lobby of the Hotel.

As for his Jewishness, Casey is pretty straightforward about his Jewish identity (“We’re Jewish…”) and he wore a kippah at his wedding in South Africa – where they served “a dinner of Peri Peri chicken, seafood platters, and crayfish (African lobster).” Folks discuss his Jewishness on Reddit here and here. And his wife Candice? While “Pool” may not sound like a very Jewish family name, her grandfather Abraham Kasimov “was born on Nov. 20, 1924, in Vilna, Lithuania, and moved with his parents and five siblings to Cape Town, South Africa, in 1928.” According to his obituary “Tokkie, as his grandchildren and their friends’ children liked to call him, was a kind and generous man who never would hesitate to help someone in need. He lived life to the fullest, enjoying traveling and eating out, but he was happiest surrounded by his family and friends on Shabbat with a delicious meal cooked by his devoted wife.” And what about Candice’s devoted Grandmother Mildred who passed away in 2015? “Mildred adored her grandchildren, Candice, Kara-Lee and Simone, and she and Katock would make the long trek twice a year from South Africa, on Pesach and Rosh Hashanah, so they could be with the grandkids for at least eight weeks at a time. She became immersed in their lives here, even driving car pools. Friends enjoyed her Shabbat dinners because she loved cooking her famous recipes for all.”

That sounds pretty darn Jewy. So yeah, Casey Neistat is for sure one of the most influential Jews that Jewish professionals have never heard of. Just another example of their all abiding cluelessness. But all that is irrelevant. Sure Casey is a Jew. So what? But what’s really interesting is that Casey is in fact a Super Jew! See the video on top of this post? It’s the usual Casey Neistat day-in-the-life shtick. Starting at 3:48 of the video, Casey unboxes the next generation Boosted Board. A Boosted Board is basically an Electric Skateboard that has become a staple of Neistat’s videos – he films himself while riding the board around New York and wherever his travels take him. Anyway, he was super excited about the latest version of the board and moved from his table to a couch to talk about how excited he was. Above the couch is Casey’s bar and there nestled in between a bottle of Maker’s Mark Bourbon and Tanqueray Gin is a bottle of Manischewitz Concord Grape wine. 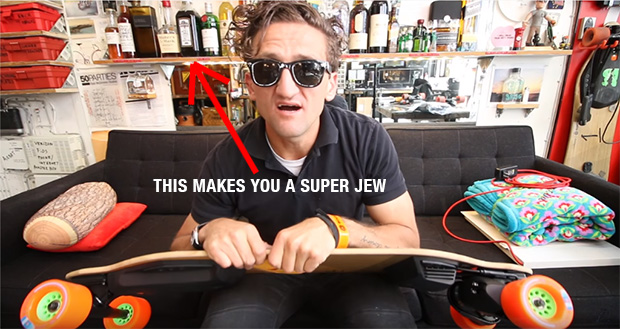 Now I don’t know about you, but if you keep a bottle of Manischewitz in your bar, well, that makes you a Super Jew in my book. Not just influential, but super dooper Jewy. Will we see Casey being honored at an ADL dinner? Will he go to a National Young Leadership Mission to Israel with UJA Federation New York? I doubt it. While he’s been to Israel before with his son, and while he has tweeted his support of Israel:

Casey doesn’t really discuss or involve himself in politics or religion much. But he does own Manischewitz wine. So fuck yeah Casey Neistat. You’re a Super Jew!