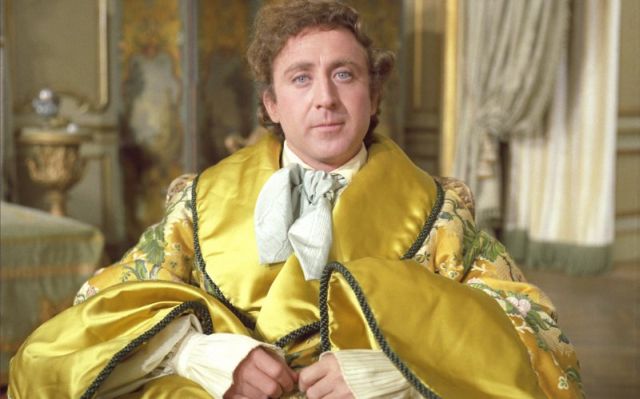 So much time and so little to do. Scratch that, reverse it!

This explains why it took me so long to write this about one of my favorite movie stars who died last Monday at the age of 83. It’s also possibly the most brilliant line ever uttered by Gene Wilder in what I believe was his most classic film “Willy Wonka & The Chocolate Factory.”

“Yah but I shoot with this hand.”

“The suspense is terrible. I hope it’ll last.”

“I don’t want to hurt you. I just want to make you kosher.”

Can you match these immortal lines with the movies he was in?

Someone posted on Facebook after he died that now is the time for everyone to start posting on Facebook how they were always such big fans of his. Well speaking just for myself I have been a Gene Wilder fan my entire life and will continue to be one forever.

My earliest memory of anything from the movies or TV is of Gene Wilder. He was the scary, but endearing, Willy Wonka. Willy Wonka & the Chocolate Factory” came out when I was but one years old and I would not see it until I was around the age of five. For small children Gene Wilder was certainly scary in that movie. But it was not long before I was old enough to appreciate what a wonderful performance he gave.

And he could sing too. 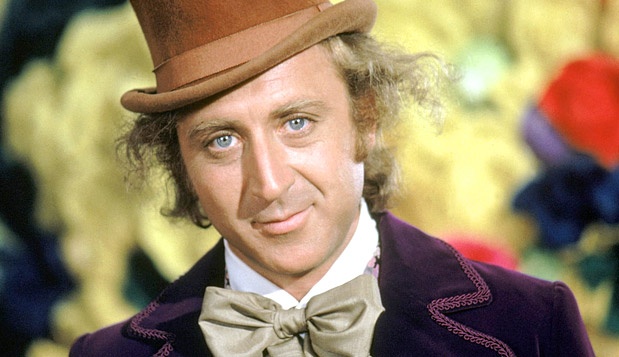 Remember all of his witty remarks to the parents when one of the obnoxious kids got what was coming to him? Like when the boy was shrunk by the ray gun so he could be on TV. Wilder tells the mother that fortunately little boys are filled with elastic so he can still be stretched back into his right size.

Then came “Blazing Saddles,” Wilder’s second collaboration with Mel Brooks after “The Producers.” In that spoof of Westerns from 1974 he played Jim, AKA The Waco Kid, a broken down alcoholic former gun fighter.

Both the movie and the performance made Hollywood history and inspired many movie spoofs to come.

And Wilder was not even supposed to be in that movie. Mel Brooks tells the story of how he originally cast an old time Western movies star in the role. But ironically that actor was actually such an alcoholic himself that he could not stay sober long enough to film his scenes and had to be replaced.

As the saying goes, God works in mysterious ways. 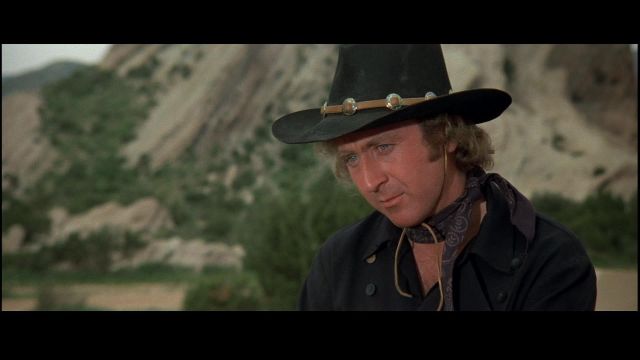 Who could imagine Blazing Saddles without Gene Wilder?

Then he wrote and starred in “Young Frankenstein,” another spoof also directed by Mel Brooks. If I have to remind you of the countless bits from the movie that left em’ rolling in the isles then you obviously never saw it.

There followed “The Adventure of Sherlock Holmes’ Smarter Brother,” “Silver Streak” and “The World’s Greatest Lover.”

But my personal favorite is the little known and sadly underappreciated “The Frisco Kid.” The 1979 Western co-stared Harrison Ford coming off the success of Star Wars. It tells the story of a rabbi from Poland before the Civil War who needs to cross all of America to make it to San Francisco. The Rabbi, played by Wilder, was appointed to serve as the city’s first rabbi.

The critics hated it. Rotten Tomatoes gives it a lousy 53% rating. Roger Ebert wrote that, “it doesn’t have a consistent comic logic to lead us through its Western smorgasbord.”

But Ebert did like Wilder’s performance and said, “What’s poignant about the film is that Wilder’s performance is such a nice one. He’s likable, plucky, versatile. He is, in fact, as good an actor here as he’s ever been before, and at his own brand of complex vulnerability Gene Wilder has never been surpassed.”

The problem was that both critics and audiences alike were expecting another non-stop riot just like Blazing Saddles and this is what the ad campaign promised. But The Frisco Kid was not a straight out comedy. It was a funny and charming movie about a simple man who needed to overcome great obstacles.

And that man also needed to find ways to keep the commandments and his faith in himself along the way. The naive boy who smiles a lot when introduced to the audience at the beginning becomes a worldly, but not world weary, wise sage by the end. 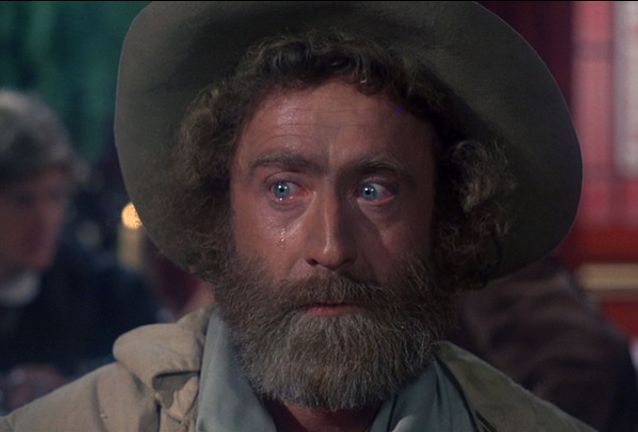 The Rabbi, named Avrum, was the victim of some treacherous thieves who conned him into traveling with them west from Philadelphia after Avrum missed his ship. The Trio then robbed him somewhere in Pennsylvania and left him for dead.

This sets up one of the sweetest and funniest bits in all of Wilder’s films. Avrum had never encountered Amish people. When he sees a group of Pennsylvania Dutch across a field after wandering for some time, Wilder’s character assumes that they are Hasidic Jews since they wear all black suits with black hats.

He learns the truth when they cannot understand his Yiddish and ask, “dust though speak English.”

Wilder then has one of a number of touching and quite profound exchanges of the film, this time with the Amish kid who takes him to a train station, after the Amish were kind enough to buy him a ticket.

Avrum tells the kid that his family has a similar, but smaller, farm back in Poland, The boy asks why he did not become a farmer like his family to which Avrum responds, “God wanted me to be a rabbi.” When asked why Avrum says, “well I guess he had enough farmers.”

Harrison Ford plays a bandit named Tommy who stumbles across a lost Rabbi Avrum and helps him to find his way to California. The two become best friends. They also encounter the three who earlier robbed Wilder and get his money back, only to be ambushed by them while on the beach after finally getting to the West coast, just before making it to San Francisco.

I don’t want to give too much away but when they get to town Avrum is upset at having had to kill a man, even if it was in self-defense. Tommy tries to explain this to Avrum. But Wilder then states that killing the man is not what he is most bothered about. It is his failure to first try and save Harrison Ford after he instead instinctively jumped to save the Tora scroll which he was taking to California after it fell into a fire upon the assault.

When Tommy says that he understands because Avrum is a man of God, Gene Wilder responds with one of the most profound monologues that I have ever heard in film.

After Tommy tells Avrum that he forgives him and understands, Avrum still insists that he is not a rabbi. Leave it up to the goy bank robber to say what the Talmud could not have said any better.

“You are a rabbi. I’m a bank robber. I’m a card player and a whoremonger. That’s what I am,” begins Harrison Ford. “You are a rabbi. You can fall in the mud, you can slip on your ass, you can travel in the wrong direction. But even on your ass, even in the mud, even if you go in the wrong direction for a little while, you’re still a rabbi! That’s what you are!”

“The Frisco Kid” was followed a year later by the smash hit “Stir Crazy” which was a last hurrah of sorts for Wilder. It grossed more than $100 million at a time when few big budget blockbusters reached that mark, let alone comedies. It reunited him with Richard Pryor who co-stared with Wilder in the 1976 hit comedy “Silver Streak.” The duo would go on to make two more films together. But they would pale in comparison to Wilder’s earlier work.

The 80s saw a string of cheesy box office failures for the actor. The end of the decade brought with it the death of Wilder’s third wife, Gilda Radner, as well as his film career.

He had a try at his own TV comedy series in 1994 called “Something Wilder,” but it was quickly canceled. In the last 16 years of his life, Gene Wilder only acted in front of a camera twice, both in cameos on “Will and Grace.” The last time was in 2004.

So 1980 not only marked the end of the 70s but also the end of Gene Wilder’s heyday. But in the previous 13 years, from “The Producers” to “Stir Crazy,” Gene Wilder left us with a wealth of entertainment that we all remember. Willy Wonka still warms the hearts of children around the world and no one even thinks of the sad remake which was made a few years ago.

God wanted Gene Wilder to entertain the world and he certainly did. An entertainer, that’s who Gene Wilder was.

Good bye Rabbi Avrum. You may have gone in the wrong direction for a little while, you may have left the stage a long time ago, but you were still loved and will continue to be loved by generations to come.