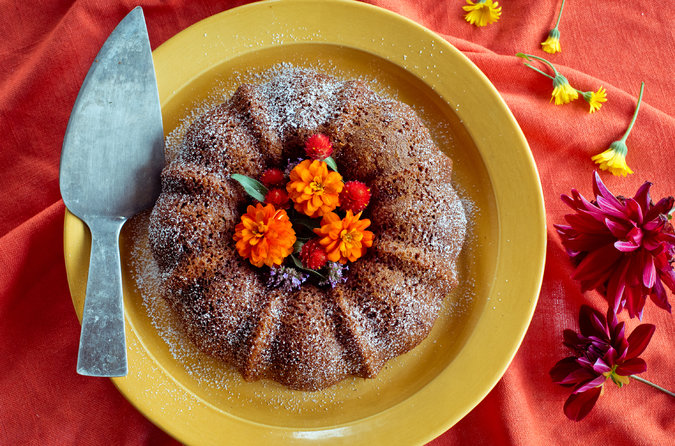 It is the second to last Wednesday in ELUL, so all the best newspapers and media sites are highlighting the latest in Jewish holiday recipes and entertaining ideas.

First off, the Queen of Jewish Recipes: Joan Nathan

In The New York Times, Ms. Nathan writes about Classic Rosh Hashana Desserts And Gives Them a Professional Upgrade She interviews the CIA and Yale trained pastry chef, Alex Levin, who updated his grandmother’s honey cake by omitting her cloves, allspice and raisins, and adding an apple cider compote to the batter. He is the executive pastry chef at Osteria Morini in Washington, D.C. His grandmother Martha Hadassah Nadich (wife of famed NYC Rabbi Judah Nadich) was Craig Claiborne’s go-to expert on Jewish cooking nearly six decades ago. To her fruit pies, which she would serve on the second day of Rosh Hashana, Chef Levin adds a plum tart with a sablé butter crust flavored with vanilla bean; a filling made of almonds or pistachios, sugar, egg and a bit of flour; and a topping of sliced plums. Apple Cider Honey Cake recipe is HERE Plum Apple Tart recipe is HERE 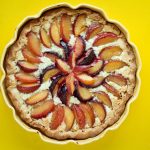 Also in The New York Times, Chef David Tanis writes about RICE, His Mother’s Way. He recalls his mother’s 3×5 index cards the recipe for Millie Feinberg’s Chicken à l’orange, which called for two cans of orange soda, and his Aunt Louise’s sweet and sour brisket, as well as Gloria Rothenberg’s cauliflower kugel (with canned crushed pineapple and cottage cheese) and Edie Mayer’s pecan rolls and lemon bars. But for this story, he share’s his mother’s SPINACH RICE, which needed two packages of thawed frozen spinach, and almonds browned in margarine (the recipe was perhaps from his Aunt Shirley by way of Elaine Horowitz)

For the holidays, Florence Fabricant reviews (or gives a shout out to) two 2016 Jewish cookbooks (I am currently reading one of them, having scored a copy at B&N last week). They are: “The Gefilte Manifesto: New Recipes for Old World Jewish Foods,” by Jeffrey Yoskowitz and Liz Alpern (Flatiron Books), and “Le Marais: A Rare Steakhouse … Well Done,” by Mark Hennessey and Jose Meirelles (Gefen Publishing) 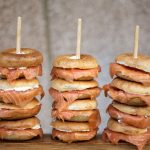 Ms. Fabricant also shows off the lox and bagel stand ($120) from a market in Manhattan.

By the way, did you know that one of the most requested… or the most requested… recipes at The New York Times is one for a Rosh Hashana deseert – a fruit torte. It dates back over five decades and was from Louis Levine and Marian Burros for a plum torte

The Wall Street Journal gets into the Jewish lifestyle biz with a story on round challah in a cast iron skillet. Charlotte Druckman makes a Challah d’Épices from her new cookbook “ Stir, Sizzle, Bake” (Clarkson Potter, Sept. 27, I have a copy if you need to borrow it), about baking in cast-iron skillets.

The Washington Post approached a pastry chef about a challah. Bonnie Benwick interviews… guess who… Alex Levin… the same chef profiled in The New York Times (above). He uses apple butter in his honey raisin challah ($15). Note that the Post writes Hashanah, and The Times writes Hashana and leaves off the last “H” for High Holy Days.

Margi Lenga Kahn has gone Gluten Free in the pages of the Saint Louis JEWISH LIGHT. She shares a gluten free challah recipe from Jennifer Robins, who lives in the Washington D.C. area, and blogs at predominantlypaleo.com. Jennifer is the co-author of The New Yiddish Kitchen: Gluten-Free and Paleo Kosher Recipes for the Holidays and Every Day.

In the Canadian Jewish News, Daphna Rabinovitch shares a recipe for APPLE CAKES FOR ROSH HASHANAH. Her “Almost not an apple cake” has so little battle that one would think it is as precarious as a fiddler on a roof. The Arizona Jewish Post and Rebecca Firkser share a recipe for Fenugreek Frybread for Rosh Hashana. The Smith College grad writes that Fenugreek is mentioned in the Talmud by another name — “rubia,” and it is used during the holidays to symbolically represent greater blessings in the new year. And when I think of the Southwest, I think of Native American frybread. So it is a perfect recipe for Arizona.

Just a few hours East of Arizona (via New Mexico) is El Paso, Texas, where Ruth Taber writes about the use of chickpeas during Rosh Hashanah Among her recipes that use Arbes, bob or nahit, ceci, chana, chickpea, garbanzo, gram, grão de bico, hummus, or kichererbse is one for GONDI, or dumplings. 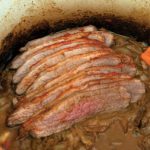 The Orlando Sentinel, part of the Tribune network, shares a brisket recipe from Diane Rossen Worthington. She highlight’s Nach Waxman’s Brisket of Beef recipe. Nach Waxmas is the founding partner of Kitchen Arts & Letters bookstore. His store is dedicated to cookbooks. And he personally focuses on Indian cuisine and recipes in the Jewish food traditions as well. His brisket secret is that he slices the meat midway through cooking. 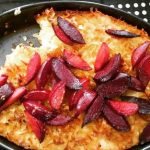 Vered Guttman in Haaretz writes that lamb is her brisket, and she shares a recipe for LAMB in POMEGRANATE SAUCE from This recipe is based on Ina Garten’s wonderful 4-hour lamb recipe. 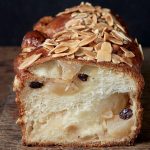 BAO ONG in GOTHAM Magazine visits the Breads Bakery in Manhattan’s Union Square for an Apple Babka and saftka cake (a cinnamon honey cake with apples). (no recipes)

Ronnie Fine for the New Jersey Jewish News is GOING SMALL. The author of The Modern Kosher Kitchen and Hip Kosher, she recommend Cornish Hens instead of a giant chicken. She shares a recipe for ORANGE AND HONEY HENS WITH SESAME. Her recipe for CREAM CHEESE-SOUR CREAM RUGELACH is HERE