Why Is Your (Jewish) Surgeon More Likely To Vote For Trump? 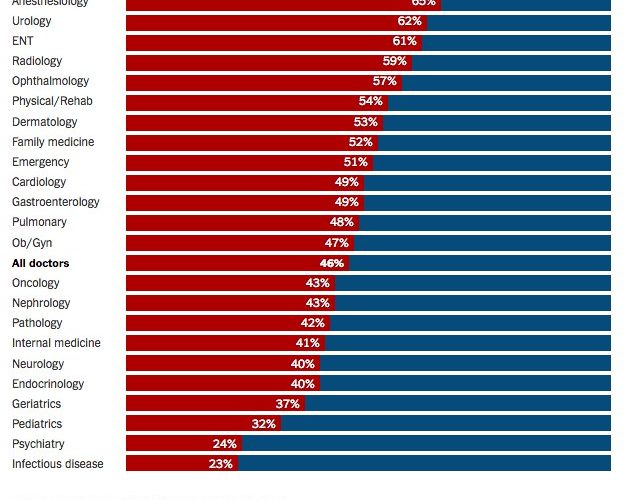 It all started at Yale University with a study on whether the political affiliation of your physician affected treatment.

Professors Eitan D. Hersh and Matthew N. Goldenberg (they might be Jewish. wink wink) had their work published this week in the journal Proceedings of the National Academy of Sciences (PNAS). The study surveyed primary care physicians, presenting them with scenarios involving patients with various issues – heavy drinking, having had two abortions, riding a motorcycle without a helmet, using marijuana, or having small children and several guns in one’s home. Physicians were asked to rate the seriousness of the issue in each scenario, and asked how likely they were to refer the patient to counseling.

They found that political affiliation could be influenced by medical specialty income (Orthopedics and cardiology were heavily Republican) and State (Obstetricians might be slightly more Republican nationwide, but mostly Democrats in Connecticut). Dr. Ron Ackermann, the director of the institute for public health and medicine at Northwestern University, says he remembers his experience rotating through the specialties when he was in medical school. “You’ll be on a team that’s psychiatry, and a month later you’re on general surgery, and the culture is extraordinarily different,” he said. “It’s just sort of a feeling of whether you’re comfortable or not. At the end, most students have a strong feeling of where they want to gravitate.”

WHILE surgeons and anesthesiologists are more likely to be Republicans… Jewish ones might buck the trend. But this may also be influenced by their location in a major metro (NYC). But then again, several Orthodox Jewish medical students choose anesthesiology and radiology for the better hours… and this might skew the results. We are going to ask for a Jewish surname crosstab. More research is needed, I suppose. Or in the words of Dr. Robert McLean, a member of the Board of Regents of the American College of Physicians, said “The truth of the matter is, we can never avoid bias… This is worth looking into more.” Hersh and Goldenberg that doctors with different views can provide different care, especially to LGBT patients or patients with addiction illnesses.