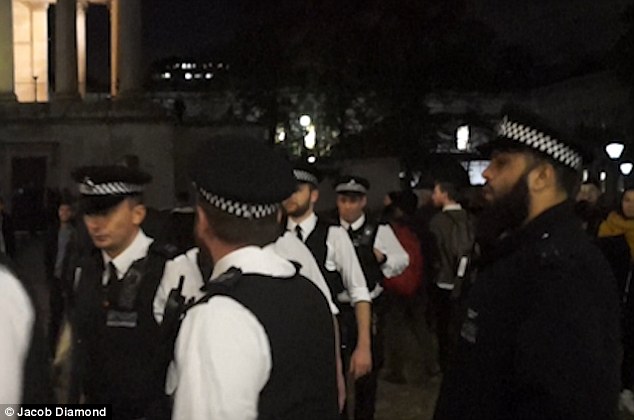 The Telegraph, Jewish Chronicle, and other media sites are reporting on the attack on Jewish students that occurred in London on Thursday at UCL – University College London. @HenMazzig, a former commander in the IDF who served as an openly gay officer in Israel was speaking to members and guests of UCL’s Friends of Israel when a group of other students barged into the room and cornered the students. Shouting and waving Palestinian flags, some students felt intimidated. London police were called to safely escort the students from the building, Mazzig, a former lieutenant who worked closely with the Palestinian Authority and United Nations was not able to complete his speech. Although university administrators said they were against this attack, no word yet on whether they will take disciplinary action against the attackers. Actually the venue of the event had to be changed after protesters occupied the original meeting room.

In other news, by a vote of 22-2-1, a student government at Portland State University passed a resolution to condemn Israel and the actions of it founding in 1948 and support boycotts and divestment. PSU President Wim Wievel called the resolution “divisive and ill-informed.”

On other campuses, Hillel has suspended a tour by popular Israeli author and speaker, Ari Shavit, after there was an accusation of assault by a reporter from the LA Jewish Journal, who said that he had grabbed her and tried to seduce her in 2014.

Also, The Forward reports on the prominent role played by Harvard’s Jewish students in the end of a three week strike by the school’s dining workers, and the students’ support for the union’s wage and benefit demands.

More importantly, Newsday reports that BELL BIALY’s will move from NYC to Long Island, if they receive tax incentives from Nassau County to move to the new, larger space. The firm bakes over 80,000 bagels and bialys a day. (Guess what. this week, they received the tax breaks to move from Canarsie Brooklyn to Long Island)

And not even a word on Trump surrogate, radio host Alex Jones, cuz I don’t want to publicize the Jewish mafia that he so fears.