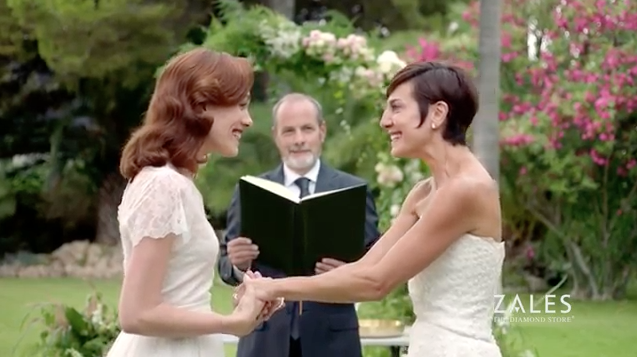 In November, the Zales chain of jewelry stores launched a “We Believe” in love campaign that featured an ad with couples getting married or engaged… with Zales diamonds. In one scene, their ad (see below) showed the marriage of a same sex.

Days later, One Million Moms, a conservative advocacy group and a division of the American Family Association (identified as a hate group by the SPLC) released a statement condemning the ad and Zales. They wrote, “Zales Jewelers should be ashamed of attempting to normalize sin by featuring two women getting married in their latest commercial.” They encouraged their supporters to contact complain to Zales directly and to purchase their diamonds and jewels elsewhere. In the past, One Million Moms launched hate campaigns against H&M, Adam Lambert, Tylenol, and American Girl dolls, to little success.

Udi Behr, an artist and designer, and founder of Love & Pride. wrote this month that When his LGBT jewelry company was targeted for selling at Zales, he became even more determined to succeed. He wrote,

As a young man living in Israel and the son of a Holocaust survivor, I saw up close the impact of conflict and hate, division and difference being obstacles to living in a peaceful, progressive society. Now we must redouble our efforts in the face of growing, seemingly insurmountable opposition from the incoming Trump administration and the potential to lose so much ground we have made for all Americans. This came very close to home immediately after the election for me and my business, Love & Pride. I have been an outspoken ally to the LGBTQ community all my life, eventually founding Love & Pride to use my passion and talent as a designer to promote education and better understanding of LGBTQ people. Channeling my life’s work into my activism has been incredibly rewarding, and our recent expansion to have a visible presence in stores around the country is something I have been working for and so proud of since we launched last June.

He continued that for him, jewelry is and always will be meant as a way to commemorate beautiful moments in our lives and a way to express love and affection. He wrote that he feels very strongly that the response by One Million Moms is both hateful and divisive, and now more than ever people must work for a world that has less division, respects diversity and allows all people to express their love for each other. (and buy jewelry)

Zale Corporation is a retailer of jewelry in North America. It operates over 1100 specialty retail jewelry stores and over 600 kiosks located mainly in shopping malls throughout the United States, Canada and Puerto Rico. It operates under the names of Zales Jewelers, Peoples Jewellers, Zales Outlet, Mappins Jewellers, Gordon’s Jewelers, Piercing Pagoda, Plumb Gold, and Silver and Gold Connection. It was acquired by Signet for over $1.4 billion. Signet, the largest retailer of diamond jewelry, is led by Mark Light (Temple Israel of Akron, Ohio, wink wink), and sells under the names of Kay Jewelers, Jared, and Sterling Jewelers.