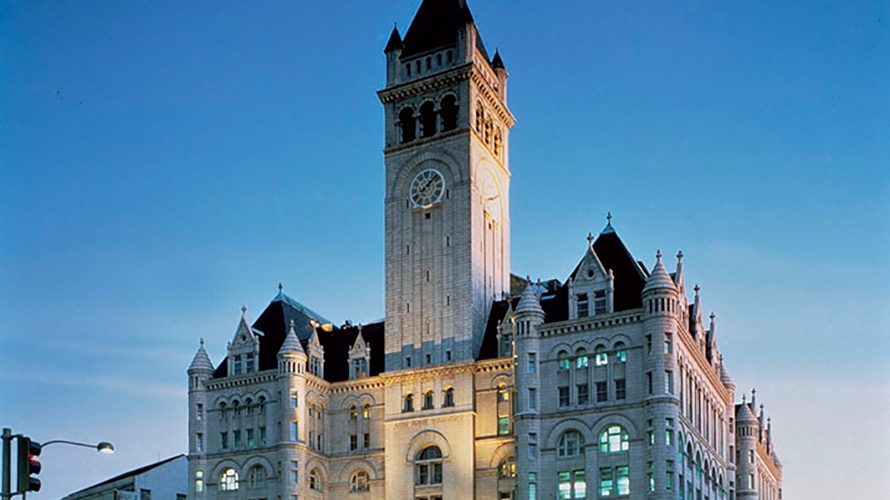 The Conference of Presidents of Major American Jewish Organizations is co-hosting an early Hanukkah party next week.

The party on December 14 is being co-hosted with the Azerbaijani Embassy** in Washington DC.

The newly opened, phallic-shaped Trump International Hotel next to the DC mall and a few blocks from the White House and Treasury.

It is the same evening as President Barack Obama’s White House Hanuka Party.

Is the group of Jewish leaders crazy… or crazy like foxes?

Malcolm Hoenlein, executive vice chairman of the Conference of Presidents, said that the Trump International Hotel is the best location for the party. He told the Washington Post that “It was done purely on a pragmatic basis,” adding that it has nothing to do with the Trump name or ownership. Hoenlein said that his group’s need for kosher food and the late planning of the event narrowed the list of venues. (I guess the JCC or Sixth & I synagogue were booked up? It is also close to the White House so that the 100-200 attendees who are invited to both posh events can make it to the White House. God forbid they take a longer cab or Metro ride.

Rabbi Rick Jacobs, president of the URJ-Union for Reform Judaism called the decision tone deaf and “naked sycophancy at worst.” Rabbi Jacobs recommended “one of the approximately 3,000 other possible locations in downtown Washington, DC.”

Sycophancy? Hoenlein said the choice of hotel was not a way to kiss up to the president elect. “The idea that the president-elect even knows who rents a room for two hours, I think, is so far from reality.”

Six groups will skip the party due to the venue: The Union of Reform Judaism, the Central Conference of American Rabbis, the National Council of Jewish Women, Americans for Peace Now, Ameinu, the progressive Zionist group, and the Workmen’s Circle.

No word yet on whether Stephen K. Bannon was invited.

Note: Azerbaijan recently sent help to the State of Israel to aid in the recent outbreak of wild fires. Israel has an arms sales relationship with the former Soviet country. As reported by Politico, a financial disclosure form filed by Donald J. Trump last May listed Trump as “director, chairman and president” of a venture in Baku, Azerbaijan. Trump’s partner is Anar Mammadov, 35, the son of the nation’s transportation minister, who the U.S. State Department listed as “notoriously corrupt even for Azerbaijan.” in a diplomatic cable released by WikiLeaks (if Wikileaks is to believed).

Note: Other groups that booked events at the Trump International Hotel include: The Republican National Committee; The Heritage Foundation’s party for top donors (the shadow transition committee); the Kingdom of Bahrain; and the “traditional values” Young America’s Foundation. ABC News reported that Bahrain rented space for their party for about $100,000. (But I can get it for you wholesale, cuz I saw a coupon on the internet for the hotel)

** But seriously… a party with Azerbaijan? What irritates me is when the leaders of major American Jewish organizations think they are so wise and sneaky and pretending to be Mossad-like agents or shills by hosting a party with a nation with which their rank-and-file members might have issues. My advice is let diplomacy get handled by Israel’s Foreign Ministry and don’t kiss a country’s ass because you think they will like Israel more or buy more arms from Israel’s military factories. The day before the party, President Ilham Aliyev of Azerbaijan said that his country has signed $5 billion worth of long-term contracts over the years to buy weapons, missile systems and security equipment from Israel. Aliyev spoke during a state visit to Baku by PM Binyamin Netanyahu. Netanyahu and Aliyev signed four economic cooperation agreements in the fields of agriculture and taxation. Environmental Protection Minister Ze’ev Elkin (Likud) also was in attendance. I think the Conference of Presidents should stick to social services and lobbying DC.