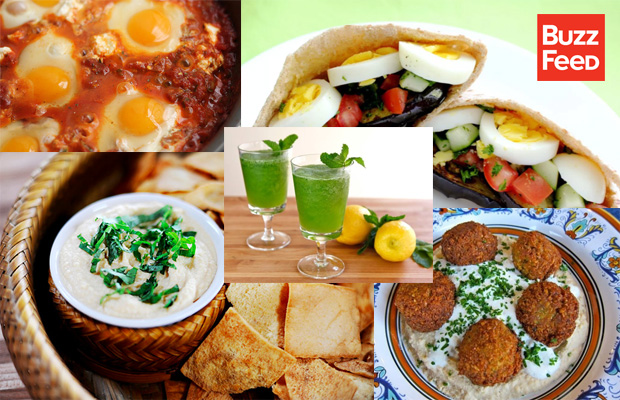 No, of course not. There’s a difference between so-called “Fake News” and just plain old ignorant nonsense. Let me explain.

There’s a new food-porn article on BuzzFeed titled “16 Delicious Middle Eastern Foods You Need In Your Life.” When the article was originally published on Jan. 31st, instead of “Middle Eastern,” it read “Israeli.” As usual with any article on the Internet that mentions “Israel,” the trolls came out in force whining about “cultural misappropriation” and how the Jews stole the land and are now stealing their food – as typified by a comment from mari41918 who stated that “More than half of these dishes are palestians [sic.] !!!! Israel stole not only land but culture also!!”

After hundreds of comments, BuzzFeed made the following update:

This post has been updated to reflect that not all items are foods exclusive to Israel. Additional Middle Eastern dishes have been added since this post was initially published.

So… the initial outrage was stupid. More than half of Israel’s population hails from Arab countries. An additional 20% are Israeli Arabs. Arab food is not the unique cultural heritage of a particular religion or nationality. But there remains something appalling about this article nonetheless. The foods presented are indeed typically Middle Eastern – dishes like Shakshuka, Kefta, Baklava, Tabbouleh, Halvah, Hummus, Falafel etc. are almost ubiquitously available in Israel and the surrounding regions. While Israelis and Palestinians and Arabs will argue till their faces turn blue about the origins and composition of the foods featured, one thing I am sure everyone can agree on is that the recipes the article links to are in many cases, unimaginably horrific.

How so? The recipe for Shakshuka written by some guy called David Lebovitz who lives in Paris, calls for onions and tomato paste. That’s a hard no. That’s just eggs poached in fucking spaghetti sauce for crying out loud! I’m not even going to talk extensively about his misguided use of honey, vinegar, loosely packed greens like Kale and feta cheese. That’s all kinds of wrong. The recipe for Paleo Chicken Shawarma is just a pale reflection of the real thing, written by remarkably pale, blonde Amy Densmore – not that there’s anything wrong with that. What’s a Sabich recipe that calls for conventional boiled eggs as opposed to brown “Jewish Eggs?” One that doesn’t include Tahini, Amba (spicy mango pickle sauce) or Schug (Yemenite spicy sauce)? You call that a shitty Sabich recipe. Ree Drummond, the “Pioneer Woman,” wades into dangerous Hummus territory for a white ginger who lives on a ranch in the US Midwest. Her Hummus “recipe” is verges on the blasphemous when she starts off by using canned chick peas. Wrong. You need to soak and cook small, dry chick peas. Geez. That’s like Hummus 101 people!

But that’s not all! We have a Limonana recipe (Fresh mint, lemonade, crushed ice drink) that doesn’t even mention adding Arak as an option. We have a home made tahini recipe that claims to be better than store bought yet doesn’t use a grindstone or specify the exact type of sesame seed to use – there’s more than just hulled and un-hulled. You can buy Karawan Tahini made in Nablus on Amazon that is both certified Kosher and heavenly. The family that’s been making this Tahini since the early 1900s would laugh at this recipe.

I could go on and on but those leaving angry comments about colonialist Israelis or Palestinian terrorists and whose food belongs to who, should instead focus on the yummy culinary traditions they share. They should vent their ire in the direction of BuzzFeed writer Samantha Wieder for her horribly curated selection of recipes. Or blame BuzzFeed for not paying their writers enough to research and present actually good recipes to their readership.