Memo to the Jewish Media: Billionaire Evan Spiegel is NOT Jewish 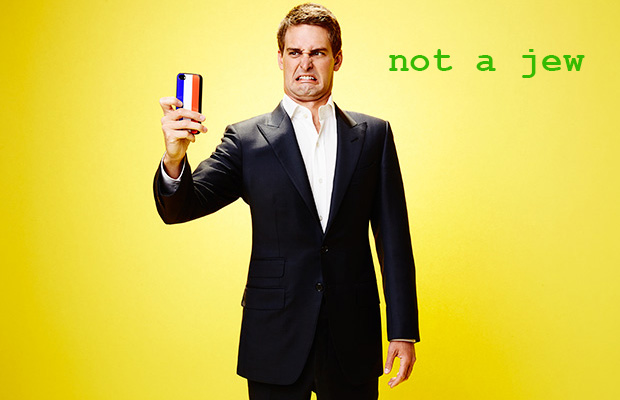 Us Jews love it when a member of the tribe makes it big. It’s as if their success rubs off on all the rest of us and offers a form of validation to a historically much maligned people. Everyone has that uncle that trots out the list of Jewish Nobel Prize winners as proof positive of our choseness. Yeah, yeah… but sometimes we over do it. Case in point, Internet billionaire and co-founder of Snapchat Evan Spiegel.

Spiegel was just listed in Time’s 100 Most Influential People of 2017 – a fact that the vaunted Forward felt the need to report when they asked 9 Jews Named to Time 100 List – Can You Guess Them All? The listed Jews included Jared and Ivanka Trump, Janet Yellin, Chuck Schumer and of course Evan Spiegel. I say of course because they had to note Spiegel’s Timely accomplishment – because they included Spiegel in the earlier 2016 Forward 50 annual list of Jews who have impacted American life the most or something. Nice!

In their write up on Spiegel, the Forward mentioned that he had recently become engaged to his girlfriend, former Victoria’s Secret model Miranda Kerr. This was also breathlessly reported by InterfaithFamily.com who love it whenever a Jew and a non-Jew get married “Supermodel Miranda Kerr, who is not Jewish, is engaged to Jewish billionaire and Snapchat creator Evan Spiegel. Mazel tov to all!”

Jerusalem Online reported that 6 of the 10 wealthiest Billionaires on WealthX’s list of wealthiest people under 35, were Jewish. They also reported that, at 25, Jewish billionaire Evan Spiegel was the youngest on the list. Wow.

Except that Evan Spiegel isn’t Jewish. Like at all. Not on his mother’s side, not on his father’s side. He’s Episcopalian and his ancestry is “…German, Irish, English, small amounts of French, Scottish, Swiss-German, and Welsh, and remote Cornish.” Cornish! Ever hear of a Cornish Jew? Didn’t think so.

It took me 5 minutes to find this out. From multiple sources. Evan Spiegel. Not a Jew. Ok?

So much for that Jews control the media nonsense.