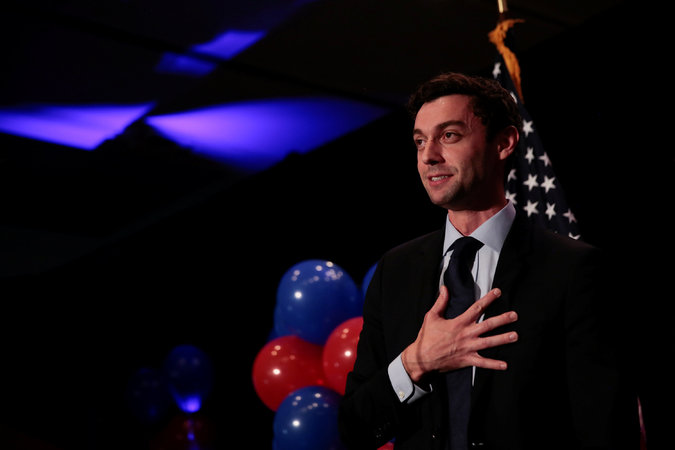 King Salman bin Abdulaziz Al Saud’s decision to elevate his son met the approval of 31 out of 34 members of the kingdom’s Allegiance Council, which is a higher number than if you found 34 dentists and asked if they would recommend Colgate toothpaste, and a higher number than if you asked 34 G.I. physicians if they recommend Imodium for IbS. In the words of Mel Brooks, “Springtime for Arabia and Israel, Winter for Yemen and Qatar.”

Someone not being granted an aliyah today is Jon Ossoff (JO, or Thomas Jonathan “Jon” Ossoff) in Georgia’s GA06 sixth congressional district.

Ossoff lost in his race to become the area’s Democratic Party representative in Washington, DC, losing to the GOP Republican candidate, Karen Handel, 55, a former Georgia secretary of state. Ossoff, a 30-year-old investigative filmmaker, and graduate of Georgetown’s Walsh School and of LSE, raised over $23 million for the campaign and received 48% of the votes. Pundits – even those at Commentary magazine – were quick to criticize the Democratic Party’s failure today. They said the party should have run someone from the district (ummm… but he was born and raised in the district). They said the Democrats should have run someone who looked more like the district (umm.. is that a code word for someone who is not Jewish?). Some pundits criticized Ossoff for not running his campaign messaging as anti-Trump, since the GOP painted him as a “Nancy Pelosi- San Francisco values” Democrat. They criticized him for speaking about climate change instead of just talking about “jobs.” The criticized him, laughably, for being too civil and centrist in a Republican district (What?) The seat will be up for grabs in 18 months. My takeaway is, when the opposition brings a knife, you better bring a machete if you want to win.

And in other news, some students of San Francisco State University – SFSU filed a lawsuit against the university saying that the leaders of the school fostered anti Jewish discrimination and created a hostile environment that made it unsafe for Jewish students. The lawsuit alleges that San Francisco State University repeatedly denied Hillel, A E Pi fraternity, and other Jewish-related student groups equal access to campus events; and they ordered campus police to not intervene when protesters disrupted a speech by Jerusalem mayor Nir Barkat.