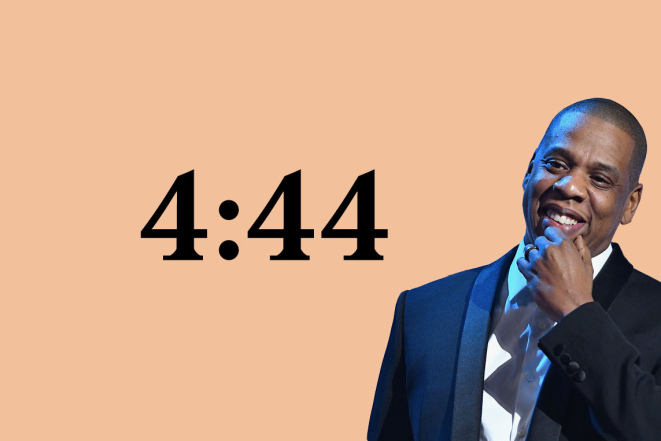 On June 30, 2017, American musician Jay-Z released “4:44,” his 13th solo compilation and fourteenth studio compilation of songs. The Roc Nation release was primarily produced by No I.D. and Jay-Z.

Could 4 44 actually be referring to the address of the Torah Academy for Girls in New York City? 4:44 Beach?

Perhaps it is Devarim 4:44 “AND THIS IS THE TEACHING…. which Moses set before the children of Israel: (45) These are the testimonies, statutes and ordinances, which Moses spoke to the children of Israel when they went out of Egypt, (46) on the side of the Jordan in the valley, opposite Beth Peor, in the land of Sihon, king of the Amorites, who dwelt in Heshbon, whom Moses and the children of Israel smote, after they went out of Egypt. (47) And they possessed his land and the land of Og, king of the Bashan, the two kings of the Amorites, who were on the side of the Jordan, towards the sunrise, (48) from Aroer, which is by the bank of the river Arnon, to Mount Sion, which is Hermon, (49) and all the plain across the Jordan eastward as far as the sea of the plain, under the waterfalls of the hill

On the compilation, Jay-Z apologizes to his wife and others, and discusses his indulgences and pleasures, and his transgressions and errors, as well as the sadness that his mother had to hide her sexual orientation for so many years. Sounds very DEVARIM 4:44 to me.

Oh… but then in the second track, “The Story of O.J.,” Jay-Z discusses why it might be better to invest than to throw “away money at a strip club?” And in a nod to the old adage that ‘Jesus Saves, but Moses Invests,’ he lays on this lyric

“Credit.
You ever wonder why Jewish people
own all the property in America?
This how they did it.”

Sure, what he means, I think, is that some tight-knit, business-oriented, successful Jewish people should be emulated.

But like WEB DuBois, James Baldwin, and Booker T. Washington — and Minister Farrakhan and Rev. Al Sharpton —
before him, it sounds like Carter is playing that lovely card that Jews own everything or that they should be emulated.

He knows quite well what he was doing when he wrote this lyric. He is not a newcomer bumpkin.

Sure many will be offended. Those who want to use it in a negative context will do so.

Others, like Israeli-born Guy Oseary (a manager for Madonna and U2) posted that Jay-Z exaggerates stereotypes in his track and obviously people do NOT believe that Jews ‘own all the property in America.’ Oseary thinks that Jay-Z, like Booker T. Washington, uses the Jewish people as an example of what could be possible or what could be achieved through effort and cohesion.