Word has come down from the bench…

not the Supreme Court bench, but the Hollywood one.

Actress Natalie Portman is our as Supreme Court Justice Ruth Bader Ginsburg, and Felicity Jones is in. Jones will star in “On the Basis of Sex” as Ginsburg, who …. Lensing will start before Rosh Hashana in Montreal, with Mimi Leder set to direct. The film will tell the story of Bader Ginsburg who leaves Harvard and Columbia law schools and struggles to be a success in a male dominated law profession in Manhattan. It script is credited to Daniel Stiepleman. Portman is known for her role in “Black Swan,” and Jones will be taking the lead in the upcoming “Swan Lake.” Very interchangeable, I suppose.

Actor Jason Bateman told The Daily Beast that a new season of Arrested Development will return to Netflix. Arrested Development is a comedy series about The Bluth family and was orginally inspired by the Bush family. Seaon 5 will be set during the present day of the DJ Trump administration, and will play up the similarities between the Trumps and the Bluths, including their love of real estate development, shady dealings with foreign dictators/strongmen, wall-building, and sons-in-law. The series was created by Mitch Hurwitz. 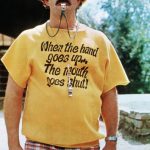 Speaking of men named Mitch… we were sad to learn that the actor Mitch Atkin who played “Morty Melnick,” the Camp Director of Camp North Star in MEATBALLS passed away in Canada.

He was 74 and resided in Toronto. In addition to his fame from MEATBALLS, Atkin appeared in over ninety episodes of the TV series, “Cagney & Lacey” as Sgt. Ronald Coleman, and may times on “Law & Order” as Judge Alan Ridenour. MEATBALLS was directed by Ivan Reitman and starred Bill Murray.

* *
Barrie Kosky, a Jewish musician from Australia, a man that some media refer to as a Gay Jewish Kangaroo, is the talk of the Bayreuth Wagner Festival (which opens July 25).

Kosky is the artistic director of the Komische Oper in Berlin. The highlight of the fest will be a new production of Richard Wagner’s only COMEDY, “The Mastersingers of Nuremberg.” The production contains a Jewish caricature as a central character who of course gets destroyed. Kosky’s take on it is expected to be quite different.

In other Hollywood and Entertainment news, actress, author, and producer Mindy Kaling is with child. No one is saying who the biological father is, but…