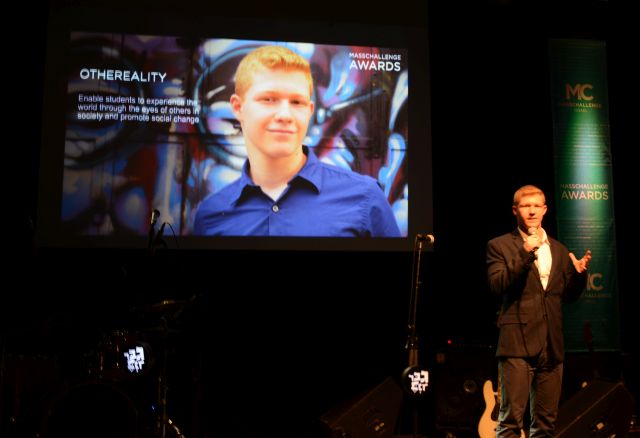 The second annual Israel MassChallenge was held in Jerusalem Wednesday night. Fifty two startups were accepted to the program which offers participants free office space and mentoring from top people in various business fields, among other things. Ten of the participating companies were chosen as finalists. Of these, four received cash awards.

The ceremony took place at the Zappa social hall off of Derech Hevron in Jerusalem. Located in a nook which looks like a back ally Zappa is perfectly situated right next to the renovated First Station outdoor center populated by restaurants, bars and a few shops. It’s next door to the offices of Jerusalem Venture Partners (a VC fund) and an office for the OurCrowd group investment firm. The biggest advantage of this year’s site was its locality to downtown Jerusalem. It was a nice night out and the event was within a fifteen to twenty minute walk away from many of the nicer hotels in Jerusalem.

Zappa has its own quality which distinguishes it from the rest of the First Station venues. It lies behind them and below Hebron Road in an old structure. It sits along a row of such venues in what looks like something out of a movie set somewhere in Los Angeles or any inner city America where old ground floor warehouses have been converted into night clubs. The main difference here would be the distinctive Jerusalem stone which adorns this building’s façade. The place would still make for a great night shoot in a local Israeli movie. (If anyone ever does do that, please remember that it was my idea.) 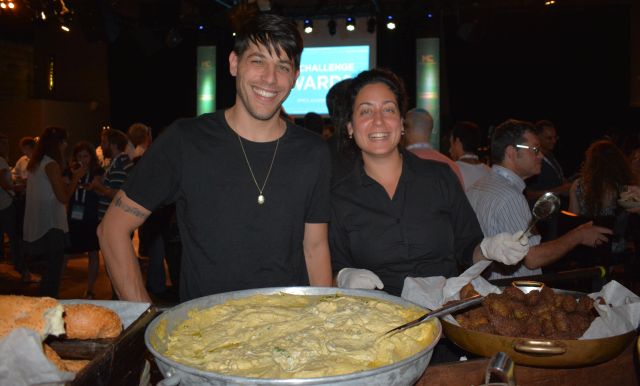 You always seem to run into the same people at these local business events and sometimes people who you haven’t seen in a long time. I saw a lawyer friend of mine Saul Lieberman who I hadn’t seen in years. Yes that’s right, a Jewish lawyer in Israel.

He has a novel idea for a startup that is so simple that it’s positively brilliant: if someone needs a lawyer for any reason or just some legal advice then they can contact him since he is an actual lawyer. Like I said, so simple it’s brilliant.

It was held a few months earlier this year because they began the whole process earlier. Perhaps they wanted to make sure to have the awards revealed before the Rosh Hashanah holiday. Or perhaps they learned their lesson the hard way after what happened in 2016: don’t hold an event like this the day after they have a Presidential election in America.

There was more of an international flavor to the 20017 program as two of the startups which were included came from India. So why include Indian companies in an Israeli accelerator? Well MassChallenge is itself expanding and is an international program. The Israeli program is also intended to be international. 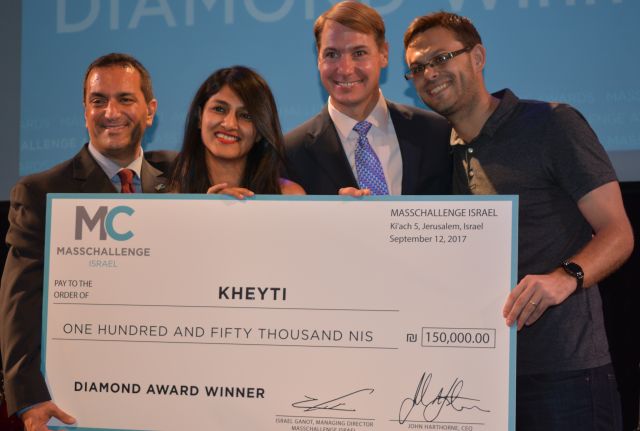 “MassChallenge Israel’s diverse and multinational 2017 cohort shows just how Israel – and Jerusalem – is quickly cementing its position as a major player on the international innovation stage,” said John Harthorne, Founder and CEO of MassChallenge. “MassChallenge is proud to be a part of – and help continue to grow – such a robust entrepreneurial ecosystem.”

The two Diamond awards (150,000 Shekels) went to Indian startup Kheyti, which works to end poverty for one million small farmers through their “Greenhouse-in-a-Box.” This is an affordable, modular greenhouse bundled with end-to-end services. The other winner was Israel’s RenewSenses. It creates a novel eyes-free perceptual experience for visually impaired, conveying the visual world through sound and touch. 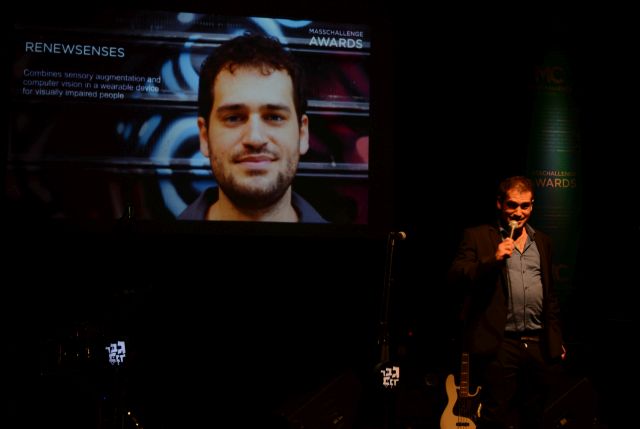 Another participating Indian startup which did not win an award was Sukriti, a company which has developed a smart toilet cabin employing hygiene maintenance systems to enhance user experience in sanitation. The toilet offers automatic self-cleaning. In their presentation the company’s founder explained how most of the people in his home country do not even have access to clean indoor toilets. 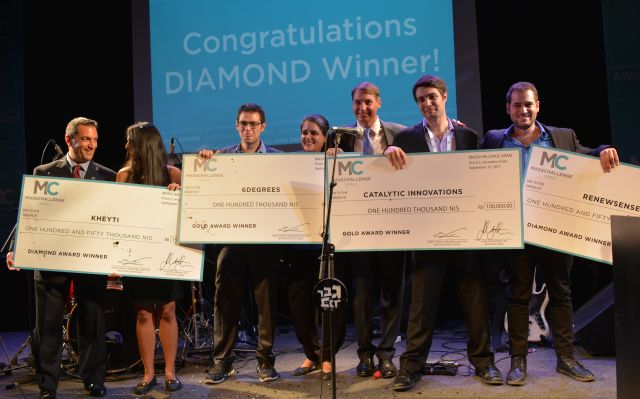 So why did the Indian companies schlepp all the way to Israel for MassChallenge. Yes they do have similar programs and accelerators in India too. But as Kheyti’s Saumia explained, “Israel is a world center for high tech, entrepreneurialism and innovation, especially in the field of agriculture. Israelis have always been involved in developing agriculture and we had a great opportunity here to learn from them.”

There was also an Arab woman from Jerusalem whose startup made the final ten. hER COMPANY, GooseWay, is an EdTech platform for the Arabic speaking market which improves the connections between parents, kids and their kindergarten teachers. 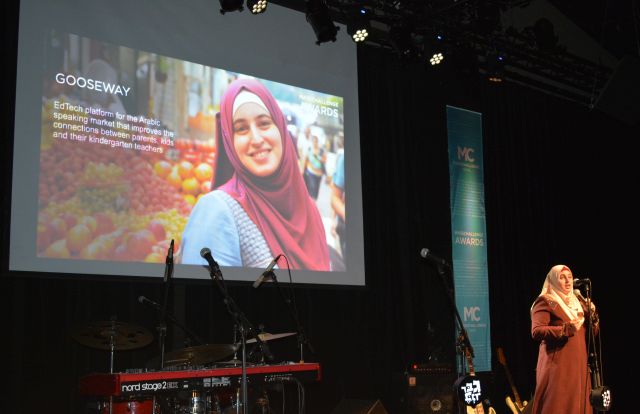 The two gold winners (100,000 Shekels) were 6Degrees, an Israeli firm developing an encapsulated solution helping people with Loss of Hand Dexterity reconnect to their digital life, and Catalytic Innovations from Rhode Island which develops electrolysis technology to clean up our air and environment.

MassChallenge does not take any equity in its participating startups, nor does it exist forprofit. It utilizes competition to identify the “highest-impact startups and reward them with a portion of several million dollars in equity-free cash awards.” It has a global network of accelerators in Boston, the UK, Israel, Switzerland, and Mexico, and offers access to its corporate partners. To date, 1,211 MassChallenge alumni have raised over $2 billion in funding, generated approximately $900 million in revenue, and created over 65,000 total jobs. 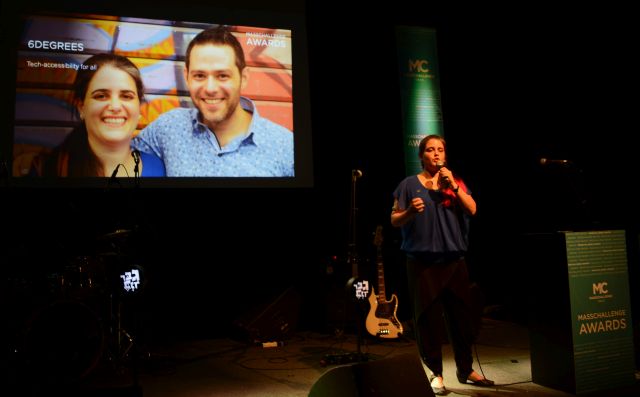