Why I #TakeAKnee During Aleinu (and Avinu Malkeinu) 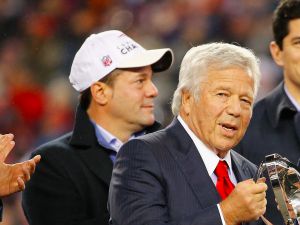 Over Rosh Hashanah and through the weekend, U.S. President Donald J. Trump’s criticized certain NFL teams, owners, and players for kneeling during the playing of the national anthem. Since 1918 and America’s participation in WWI, the Star Spangled Banner (which became the U.S. U.S. National Anthem in 1931) has been ritually played at certain sporting events, especially at times when a public display of patriotism was deemed necessary.

NFL players and members of the teams were protesting inequality and oppression, garnering fans and enemies, support and rebuke.

President Trump called on players to be fired, some political candidates turned it into a story about supporting “the troops,” and overall, many used the issue as an opportunity to move their own causes forward. Plus it was an easier story to digest that hurricane damage, suffering, and healthcare funding.

The celebrities and late night talk show hosts chimed in. Stephen Colbert said that NASCAR planned to fire any driver who did not stand for the playing of the national anthem. He did point out that there is only one non-white driver in the main NASCAR circuit.*

And actor and retired union leader Ed Asner tweeted that he would #TakeAKnee… but would need help getting back up:

I am taking a knee on Sunday. I might need someone to help me up. #TakeAKnee

As for me… I #Took A Knee during Aleinu. 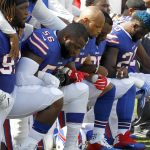 KNEELING – to me – is not offensive.

It is not a raised arm salute. It is not a turned back. It is submission and prayerful.

Was I protesting oppression.

I was mostly focusing myself during the beginning of the Malchuyot section of the Shofar portion of the High Holiday service during the singing og the “Great Aleinu” prayer. As the liturgy sort of reads: we bend our knees, we bow low, we prostrate ourselves in the fervent hope that the power of God will remove idol worship and hate, inequality and suffering. As The Velveteen Rabbi taught many years ago, Malchuyot is related to Melech (King, Kingship), and can be an acronym for Mochin (your mind), Lev (your heart) and Kishkes (your guts).

And when I #TakeAKnee… I am feeling it in my Kishkes.

As for Avinu Malkeinu…. I don’t #TakeAKnee during it… but I needed a reason to post this version below:

* Darrell “Bubba” Wallace, a 23-year-old driver from Mobile, Ala., was only the fourth African American to race in the NASCAR Cup Series, the sport’s top level, when he participated this year at Pennsylvania’s Pocono Raceway. He was the first African American to participate in the past eleven years ((not since 2006)