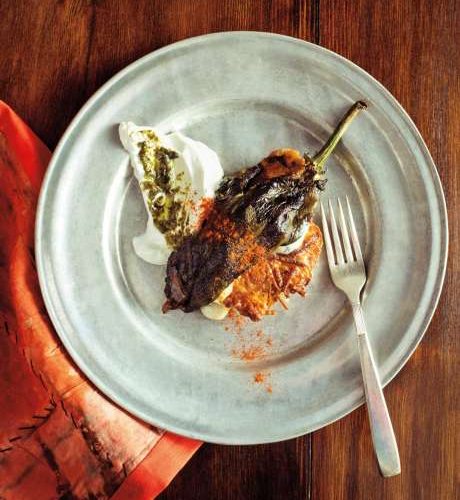 Does LOL stand for Lots of Latkes?

I was excited by The San Antonio Express-News’ Green Chile Relleno Latkes. Then I noticed they were from Joan Nathan’s cookbook. But I still like the creativity, even if the newspaper didn’t develop them itself. They recommend using two whole green chiles: (Anaheim, Poblano, or Hatch).

If I eat a poblano chili, I will have to run.

Speaking of which, Runners World magazine, has Potato Latkes that are recommended for CARB loading over pasta. They also recommend substituting Brussels Sprouts, Sweet Potatoes, Beets, Celery Root, or Carrot+Parsnip for the potatoes in your latkes.

Speaking of BreXit, in London: The Jewish Chronicle twirls like a dreidel and promotes their SPIRALISED potato latkes with dill crème fraiche and smoked salmon They also spell it ChanuCah.. OH! Those! Brits!

On Wednesday as the clock struck midnight, TABLET magazine published a recipe AND A VIDEO from Joan Nathan. Her’s uses celeriac root and praises the food processer.

The Sonoma Index-Tribune – readers of which suffered awful fires this year – makes a tasty Hanukkah Latke. Their recipe comes from Mara Kahn, a leader of the annual Wine Country Jewish Winemakers’ Tasting & Nosh

The Boston Globe is FAKE NEWS. Sheryl Julian prints the CHEATERS LATKE which is not really a LATKE HERE. It is a sad day for Boston. In her recipe you do not peel the potatoes. You boil them for several hours. YOU THEN cool them and peel off the skin. You then mix them with flour and utilize at least one skillet. It is a trick she learned from the Swiss. She had tired of scraped knuckles from her box grater. Shimon and Judah ha-Maccabee did not whine about scraped knuckles on their box hand-shredder.

Susan Barocas, for The Washington Post and other papers, including Oakland’s, write heresy, that there are other foods for the holiday other than the latke. She recommends cheese blintzes, Turkish Green Bean (Fasoulia), Persian KooKoo Sib Zamini (From Potomac’s Ellie Dayan), and a berry sauce you can make with frozen bluberries and cranberries.

Peggy Wolff of The Chicago Tribune jumps the shark and discusses cheese and the story of Judith. In Hanukkah cheese-basked pastries celebrate the story of Judith we get a recipe for cheese pastries from A Treasury of Jewish Holiday Baking by Marcy Goldman. Quite a bloody story… so you can see why the ancient Jewish leaders swapped Judith’s story for that of the miracle of the oil.

The Star News in Wilmington (North Carolina, not Delaware) has a lovely recipe in an article titled, Celebrate the Festival of Lights with new flavors by Ashley Morris. Ashley interviewed Sandy Apple, whose husband Jerry was a rabbi of Temple of Israel; Beverly Tetterton, a member of the synagogue; and Lenore Gordon, also the wife of a rabbi for their latke recipes: Potato, Cauliflower, and more. Speaking of the TEMPLE OF ISRAEL, if you want to go to their annual latke party of their prayer vigil against violence… visit them HERE 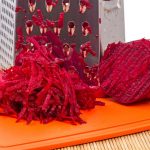 Swap out shredded potatoes for shredded beets to make a healthier version of classic latkes.

By the the way, this February, THE famed, honored and clebrated GUTHRIE THEATER in MINNEAPOLIS will be producing and staging a Yiddish play featuring the greatest Jewish love scene ever on stage. I don’t know about you, but I am actually planning to fly there for its opening weekend.

On the other side of town at the Minneapolis StarTribune, we learn that good latkes get topped with diced apples, and you can use an ice cream scooper as a cooking tool. I like how the page is sponsored by Idaho potatoes (and the Minneapolis Ballet Nutcracker).

(Sorry celebrity chef Mario Batali, we had to cut you latke recipe this year)

In the Mercury News Jessica Yadegaran builds a better (crispy) latke scientifically by learning from Peter Levitt, executive chef and owner of Saul’s Restaurant & Delicatessen in Berkeley. He fries with oils that have a high smoking point, like canola or rice bran.

NBC NEW YORK TV shares a recipe for Beet Latkes with Roasted Apple Yogurt The recipe is from the 2013 cookbook: BALABOOSTA by Einat Admony.

NBC’S TODAY SHOW shares a latke recipe from Adam Richman HERE. He uses a hand grater… or his intern does. Adam is a graduate of a Solomon Schechter school and Brooklyn’s Midwood High School… as well as Emory and Yale (School of Drama). He is a self taught suchi and latka chef.

Addie Broyles for Austin360 in Texas shares Gail Simmon’s Latke Reubens, from her Grand Central cookbook, titled Bringing It Home: Favorite Recipes from a Life of Adventurous Eating It only uses 25 ingredients. Easy. Gail is a “Top Chef.” 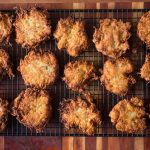 You know what else is Top? The fundraiser in New Orleans for Jewish Children’s Regional Service. Ann Maloney for NOLA’s The Times-Picayune writes about Chefs Mike Friedman and Greg Augarten, co-owners of Pizza Delicious, who will fry latkes and dish out a variety of toppings for them an event on Dec. 14 in a local saloon. Recipe included in the story. They use shredded potatoes.

Debbie Salomon of the Burlington Free Press writes about the Perfect Latke. Debbie, and Vermont socialists, grate potatoes and onions in batches, and tosses in lemon juice to add sparkle.

Over at POPULAR SCIENCE magazine, NICOLE WETSMAN explains the SCIENCE of crispy latkes. You do NOT have to go to Technion to understand it. She writes that to fry food, you must first heat a pan of oil to around 350°F. When potatoes hit the hot fat, any water they contain vaporizes into steam, because H2O boils at the much lower temperature of 212°F. If you’re watching the oil, you’ll see the pan fill with bubbles as this steam escapes. When a piece of potato loses all this water, its surface dehydrates. Only then can the hot oil work Maillard reaction magic, breaking down the latke’s sugars to create more complex flavors and turning it brown in the process. When you start with less water in your potatoes, this dehydration happens faster and the potato bits brown sooner. That means the latkes will spend less time sitting in the pan and soaking up crunch-reducing oil. In other words, squeezing out the water before you start will make the Maillard reaction happen sooner, giving you crispier potato pancakes. Nicole is a recent Bowdoin grad in Neuroscience. I trust her.

Natalie Lobel at The Daily Meal writes about THE ULTIMATE LATKE. What makes it ultimate? You have to fry as soon as your grate and mix. This former line cook at LA’s Sqirl restaurant adds Coca Cola to her Hanukkah brisket.

ULTIMATE? But are the LOVABLE? LOVABLE LATKES are highlghted in Cleveland Jewish News.

In JWEEKLY in the SF BAY AREA, Gabi Moskowitz writes about Dim Sum style latkes. In her latest cookbook, Hot Mess Kitchen, she calls her latkes Third Date Dumplings, named for the fact that I made them with her now-husband on their third date. But with this particular version, she added cream cheese. They’re one part vegetarian crab Rangoon, one part kreplach and all parts delectable. Plus, the cream cheese and sweet potato combination calls to mind the flavor of yam latkes with sour cream: Spicy Sweet Potato-Cream Cheese Dumplings.

The Saint Louis Jewish Light has a Japanese Latke: okonomiyaki HERE. They remind me of the Okonomi Latke from a 2014 issue of The New York Times.

One Green Planet has some plant based recipes, including ones for over baked latkes (no oil), Cauliflower Pot Roast. Pumpkin Spiced Latkes, and Gluten Free Latkes.

The TOLEDO BLADE wins for best Latke pictures this year. I am not too keen on the Fa La La La Latkes or mention of bacon… but to each their own.

The Philadelphia Inquirer highlights a fusion of Hanukkah and an Asian cuisine Philly restaurant group. In Celebrate Cheu-nukkah with flavors from Japan and China we meet Mr. Puchowitz, who with friend Shawn Darragh owns Cheu Noodle Bar, Bing Bing Dim Sum, and Cheu Fishtown. His dishes include Ramen with brisket and matzo ball, and “Bubbie Chow’s sliced beef”: brisket served with steamed buns at his Fishtown location. As Puchowitz recently prepared a Hanukkah meal in the bright, colorful Cheu Fishtown kitchen, he built on the family recipes he grew up with, transforming them with Chinese and Japanese ingredients into dishes like barbecue brisket, latkes with scallions, sweet and sour Brussels sprouts, and cake with ginger and mandarin. He shares a recipe of latkes and miso.

And to come full circle, Joan Nathan for The New York Times shares A New African Tradition for Hanukkah where we meet Meskerem Gebreyohannes, who make doro wat, a luxurious chicken dish. Mrs. Gebreyohannes, 58, grew up in Harar, a city in Ethiopia a few hours by car from Somalia. Now she lives in Michigan and is the chef and an owner, with her husband, Kassa, of Taste of Ethiopia, a small restaurant in Southfield.