A Royal UK Shidduch by a Bahraini Jew, Rabbi Krumholtz on CBS; Fund a Nazi; Flynn & Netanyahu, and More 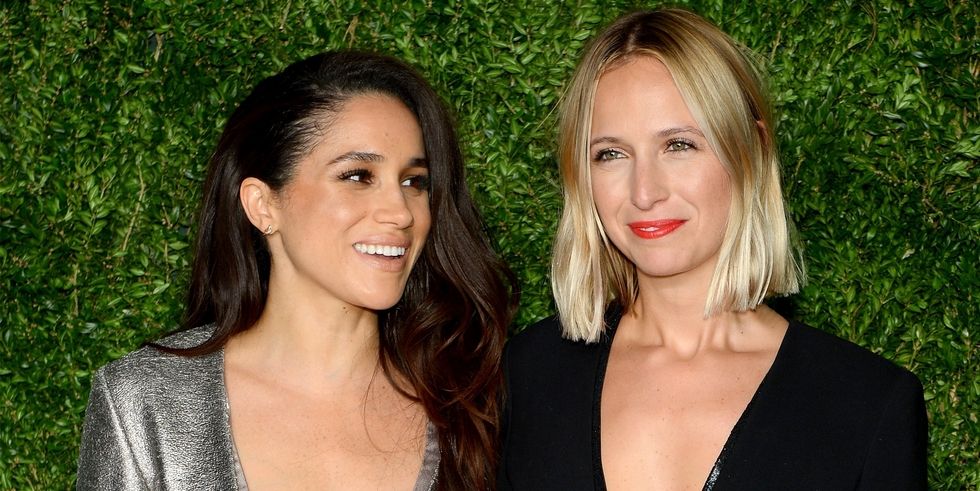 Mazal Tov to the Royal Family of the United Kingdom on the announcement of the engagement of Meghan Markle And Prince Harry. While none of the engaged are of the Jewish faith, the person who sort of arranged the shidduch is. TownAndCountry, People, and some British tabloids report that apparel designer Misha Nonoo helped make the match. Nonoo is a close friend of Markle, and was also a guest at the wedding of Prince Harry’s older brother. Nonoo is from a Jewish family with Iraqi-Jewish roots and was born in Manama. She is the niece of Houda Ezra Ebrahim Nonoo, a former Bahraini Ambassador to the United States.

I would like to write that conversely, a British anglican made a shidduch between Rabbi Menachem Creditor of Berkely, CA and NYC’s Neshama Carlebach. But that isn’t true. They met when she performed a singing gig at his SF Bay Area synagogue. A Summer wedding is planned.

Remember A.J. Jacobs’ book about The Year of Living Biblically ? Actor Johnny Galecki (Big Bang Theory, Roseanne) and Patrick Walsh (2 Broke Girls) have based a new comedy sort of on Jacobs’ book, and CBS just scheduled it to premiere in late February 2018. It is titled Living Biblically In the first season, Chip Curry (Jay Ferguson, the father in The Real O’Neals) is a newspaper film critic who – after the death of a close friend and his impending fatherhood, decides to live strictly in accordance with the Bible. Chip creates a “God Squad” (not to be confused with Rabbi Marc Gellman’s God Squad on Long Island, NY). Chip’s squad consists of Father Gene (played by Russian/Puerto Rican/Jewish/Greek Orthodox Ian Gomez), a Catholic priest; and Father Gene’s best friend and barfly, Rabbi Gil Ableman. Rabbi Ableman (rhymes with Gellman) is played by David Krumholtz (Eppes on Numb3rs, Freaks & Geeks, Sausage Party). Rabbi Gil acts as a sounding board as Chip embarks on his sincere spiritual journey toward a more moral (Is it okay to stone an adulterer in the office?) The producers are Warner Bros TV, and Galecki’s Alcide Bava Productions.

A place that is not living so biblically is an old synagogue in Washington DC. The New York Times profiles the historic Sixth & I Street synagogue and how it is a popular, young, hip, and crowded venue for DC nightlife. Noah Weiland in “Synagogue’s Mix of Arts and Religion Helps Shape Jewish Life in Washington” writes that the former synagogue and African Methodist Church is a hybrid, non denominational synagogue that is “open-ended and self-defining and evolving”

What is not evolving are neo Nazis. After the New York Times profiled a young neo Nazi in Ohio, last week, he and his wife were terminated from their jobs and are now moving out of their town. A crowd funding site decided to raise $1000 for the couple, and so far, has raised, nearly ten times that amount. The site crashed (or is down for maintenance) after the fundraising campaign was publicized.

Speaking of crashing, did you follow the Israel angle on the story about President Trump’s short-lived first national security adviser, Michael Flynn, pleaded guilty to lying to FBI. The issue concerns Flynn’s involvement with Turkey. According to court documents, Flynn lied when he told investigators that he did not ask then-Russian Ambassador Sergey Kislyak to “refrain from escalating the situation” in response to sanctions that then-President Obama had levied on Russia in response to meddling in the election. Flynn also lied, counsel Mueller charged, when he said he did not ask the ambassador to stymie an unrelated United Nations Security Council vote that was going to snaction Israel for building settlements. He “misrepresented” his discussions with Kislyak to the FBI. How is Israel involved? Flynn is said to have asked Kislyak to use Russia’s U.N. Security Council status to delay a vote on a resolution that would condemn Israel for its settlement activity. Mueller’s team says that Netanyahu contacted the the Trump Transition Team to get their help. It is more that the lie to the FBI was wrong, and not that the transition team was working at odds to the Obama administration. U.S. President Obama’s administration did not exercise the U.S. veto to stop the resolution that criticized Israel. The United States abstained, Russia voted in favor. It is alleged that Flynn was acting on advice or requests from Jared Kushner.

Speaking of politics… did you get #GivingTuesday appeals from the Jewish Democrats and Jewish Republicans this week? Both are rife with ambiguous half truth and #CreativeFibs. The newly created “Jewish Democratic Council of America (JDCA)” sent out an appeal over the signature of its chairperson, Ron Klein. It are taking the place of the National Jewish Democratic Council (NJDC). It states that “Anti-Semitism has roared back to life with surprising ferocity” under the new administration. Roared? Really? …. on the other hand, the Republican Jewish Coalition sent out a solicitation saying that Democrats are supporting Anti-Semites. A tad over the top, I would say.

And speaking of direct mail soliticitations.. Who is sending all the anti Al Franken and Al FrankenSTEIN direct mail? A group called Club for Conservatives PAC. How weird, their filings list yjeir address as a strip mall or a shared office maildrop that never heard of them. And their Treasurer is a Ms. Brooke Pendley who does not seem to be a real person. Oh well… it’s either a scam fraud operation to collect money, or a scam operation to influence public opinion. Politics can be fun and profitable.. and quite racist.