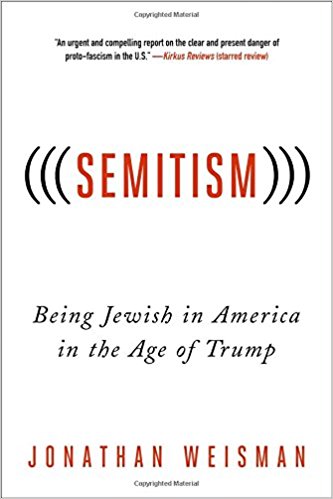 Jonathan Weisman is the Deputy Editor for The New York Times’s bureau in Washington, DC.

In May 2016, as Donald J. Trump moved through the GOP primaries, Weisman tweeted some information on a Brooking Institution op-ed essay on fascism. He noticed that someone named @CyberTrump in the Twittersphere tagged him with triple parentheses ((( ))) and a reply. Actually, it was “Hi (((Weisman))).”

Cybertrump replied with tweets that the “vaunted Ashkenazi intelligence” should know that the parentheses are a dog whistle that “bells the cat” for “fellow goyim.”

Little did Weisman know (nor did I), that in social media, the triple parentheses means JEW. It is akin to tagging an account with a yellow star on its lapel.

This was shortly followed by months of a deluge of hateful tweets and threats against Weisman… including pictures of him with a Jewish star, or memes of him being gassed by Trump in a Nazi uniform. Make America Great Again was superimposed on a lot of Nazi, Auschwitz, and Holocaust imagery.

Weisman retweeted several of the tweets to his 50,000 followers, which just amplified the activity. The haters loved the extra publicity… probably salivated for it. Some Jewish leaders told Weisman to ignore it and not feed their desire for exposure. But one Rabi told him to confront the injustice.

The New York Times compiled a list of the worst tweets against Weisman and sent it to Twitter to get them removed. Twitter initially declined to terminate the purveyors of the worst threats.

Which got Weisman thinking… has the Jewish experience in America changed under the Trump administration? Has President Trump made nationalist policy into the policy of the executive branch? Why was Trump’s last TV ad before Election Day play on “Jewish imagery” and feature Lloyd Blankfein, which was kibble to white nationalists.

Weisman’s book, (((Semitism))), is about being Jewish in the Trump era. It is also about Andrew Anglin of The Daily Stormer, and his extraordinary skill at stirring up mayhem and hate, while standing on the platform of free speech. Weisman devotes an entire chapter to American Jewry and its obsession with Israel, and how, in his opinion, instead of unifying against hate, many ignore Trump’s white nationalist buddies, since some in the Jewish community like Trump’s foreign policies.

Have Kushners in the White House reduced anti-Semitism and hate?

Has hate for Jews grown, or has it just come out of the shadows?

If a Washington DC politicial leader (Trayon White, Sr.) says (this week) that Jews control and manipulate the weather, and associates Jews with Rothschild-plots, is that due to a Trump administration?

If the leaders of a women’s march this coming weekend in DC won’t criticize Louis Farrakhan’s hate against Jews, is this a new or continuing perception of Jews in public life?

Are professors who refused this week to have an event in a space that is owned by a campus Hillel more emboldened to show their hate of Jews in the current environment?

Are the increases in banners of hate hung from highway overpasses in the past 14 months because of Trump’s lax attitude towards it?

Would Tennessee’s legislature refuse to pass a resolution condemning white supremacy groups and neo-Nazis as they did this month if it wasn’t for the current Trump Era?

Getting personal, Weisman explores the how his own Jewish identity is disconnected from what others – supporters and detractors and alt-right racists – expect from him. Actually, these attacks have made him more aware of his Jewish identity and increased his desire to educate his children in their Jewish heritage and Jewish philosophy.

For those who think this is all a tempest in a social media teapot, take a look at the vile hate that spewed forth this month on Twitter against a Jewish leader who reiterated the U.S. census and Brookings Institute estimate that America will be “minority white” in 2045.

Weisman reports deeply on the Alt Right (and alt-Reich) and its roots and why they love “14 88.” He explores how mainstream political groups tolerate the hate and use it for their own electoral and policy ends.

Although his prescription is for Jewish unity to fight hate and confront threats and not ignore it; I doubt many will follow it.