Kushner Boy Brings Another To The Jewish Faith and Other Newsbits 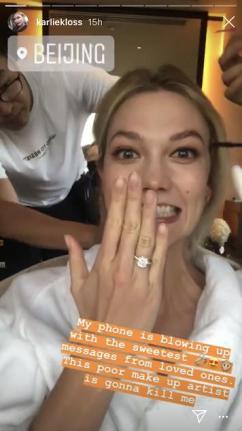 The Kushner family’s love of the Jewish faith has brought another woman to it.

Jared Kushner, The Son-In-Law of the United States (SILOTUS), famously married Ivanka Trump after they fell deeply in love and she chose to become a member of the Jewish faith, having studied with a rabbi on Manhattan’s Upper East Side.

Now, we read that Joshua Kushner, Jared’s younger brother, has become engaged to Karlie Kloss, after her acceptance of the Jewish faith. Karlie Kloss, a supermodel and super philanthropist, reportedly also studied with a rabbi on Manhattan’s Upper East Side.

PEOPLE magazine reported that Joshua, who has dated Karlie for six years, proposed marriage to her a few weeks ago during a weekend together in “upstate New York.” Josh, 33, is a graduate of Harvard College and Harvard Business School. Among his business activities are the Kushner Companies, Thrive Capital, and Oscar healthcare.

Did he get the perhaps 6 figure engagement ring at “Jared’s?” No. It appears to be a high-carat weight, cushion cut diamond in a platinum solitaire setting with a diamond pavé band. It isn’t sold at Jared’s.

I do not believe there is a another Kushner sibling in the wings who will bring another statuesque partner to the faith.

In other news of Jewish men, the stock of CBS, Inc. dropped 7% in value on Friday, after it was learned the Ronan Farrow will publish a story in The New Yorker magazine about allegations that CBS’s CEO and Chairperson, Les Moonves, was accused of job-related sexual misconduct. The stock, which has paid a dividend of over 1.3% in the past, dropped 7% at one point.

This came just days after the stock price of Facebook, a company which is led by Mark Zuckerberg and Sheryl Sandberg, dropped 20% – or one fifth of its market value – on news of lower revenue and usage. Zuckerberg had been in the news earlier this month when, in an interview with Kara Swisher, he said, “I’m Jewish, and there’s a set of people who deny that the Holocaust happened. I find that deeply offensive. But at the end of the day, I don’t believe that our platform should take that down because I think there are things that different people get wrong. I don’t think that they’re intentionally getting it wrong, but I think…” “…What we will do is we’ll say, ‘OK, you have your page, and if you’re not trying to organize harm against someone, or attacking someone, then you can put up that content on your page, even if people might disagree with it or find it offensive.’ But that doesn’t mean that we have a responsibility to make it widely distributed in News Feed.”

Speaking of CBS, The New York Jewish Week reported on sexual misconduct allgation – in semi graphic detail – against Steven M. Cohen, a “prolific researcher and noted Jewish sociologist who has spent a career studying the American Jewish community.” He has since been removed or resigned from several positions in light of the allegations.

I am not saying it is excessive… but… an RA (Resident dormitory Assistant) at Stanford University who is of Palestinian heritage posted that he would “physically fight” anyone pushing the idea of a democratic Israel on campus. The student has since modified his post to be “intellectually fight.” Nevertheless, not only did the campus student Republicans club call for the student’s firing as an R.A., but a group started a Facebook advertising campaign calling for his dismissal, and statements were sent to the school from the Conference of Presidents of Major American Jewish Organizations, the World Jewish Congress, and the Lawfare Project. I am glad tha tthe World Jewish Congress is getting involved in these major issues. Maybe they can write something about the Labour party in London? or that eruv issue in NJ? The original post was: “I’m gonna physically fight Zionists on campus next year if someone comes at me with their ‘Israel is a democracy’ bullshit. And after I abolish your ass I’ll go ahead and work every day for the rest of my life to abolish your petty ass ethno-supremacist, settler-colonial state.”

Writing in The New Republic, Joshua Ladon of the Shalom Hartman Institute of North America writes that American Jews must come to terms with their Jewish privilege and racism. I would love to explain to you what he is writing about, but he lost me after the first paragraph.

Bravo to the U.S. Coast Guard. This week it named its newest fast response cutter for Nathan Bruckenthal. The 154-foot vessel was named for Petty Officer 3rd Class Nathan Bruckenthal, 25, the first Coast Guardsman to be killed in action since the Vietnam War. Bruckenthal was killed in Spring 2004 along with two sailors as they attempted to board and inspect a suspicious boat (dhow) in the North Arabian (Persian) Gulf, off the coast of Iraq. A bomber on board the explosives-packed boat detonated a device. Bruckenthal was posthumously awarded the Bronze Star with a combat valor device for his actions that day. According to his Bronze Star citation, the actions of Bruckenthal and his team alerted nearby security forces to a larger coordinated attack, enabling them to stop two similar explosive-laden vessels before they were detonated. Bruckenthal was on his second deployment to the Persian Gulf and had volunteered for a second watch on the day he was killed, the ship’s new commanding officer. He was buried at Arlington National Cemetery. At the time of his death, he left heind a wife who was 3 months pregnant. The daughter he never met, Harper, is not 13.

The New York Times reviews a documentary about ultra-Orthodox Jewish women who have formed a volunteer ambulance service in Brooklyn, NY. In 93QUEEN, women EMS workers serve women who are reluctant to call on men of the Hatzolah ambulance service for medical aid. 93QUEEN is directed by Paula Eiselt, who follows the nearly four year old “Ezras Nashim” in Borough Park. Originally, acording to the film, women were supposed to be allowed to serve with Hatzolah. But this idea was scrapped. Sadly, at first, the “93Q” ambulance crew gets more crap from Hasidic men than a bus ad featuring mayoral candidate Rachel Azaria in Jerusalem. There are more prank calls than real ones, and rabbis refuse to endorse the service. Slowly, slowly the group is being accepted by some. The Times noted that it is inspiring.