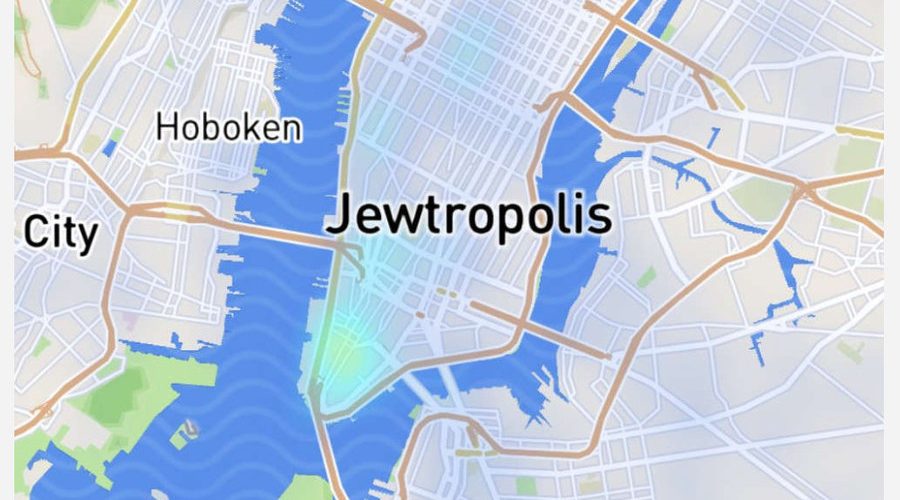 On Thursday morning, users of SNAPchat, Weather Channel, Citi Bike, StreetEasy and other apps noticed that New York City had been renamed “JEWTROPOLIS” on maps.

The provider of the digital map technology, Mapbox, uses OpenStreetMap to supply data, and one of its volunteer users – a nefarious one – allegedly made more than eighty hate-oriented and anti-Jewish edits to various locations. It was a termed an hate-speech “anti-Semitic tirade” by someone who saw all the changed placename edits.

All the edits – except Jewtropolis – were blocked Mapbox’s A.I. systems, but Jewtropolis made it to the live version. The error was fixed within an hour.

Why a human reviewer allowed Jewtropolis through is being investigated. Mapbox has added aditional layers of checking to its data verification processes to stop this digital graffiti. The CEO of Mapbox said, “It doesn’t matter how smart your AI is, if in the end your ultimate confirmation point comes back to the human side.” Evan Bernstein, a regional director for the Anti-Defamation League, said it was an example of “hate going online.” In a tweet, the ADL offered to help Mapbox fix the error. In late 2017, Mapbox raised $164 million in funding in a round led by SoftBank Group Corp. It is expeced to be a major provider of data for self-driving automotive technology.

Russia Today was quick to report the incident… a little too quickly perhaps?

Many are asking Californians to boycott the IN N OUT Burger chain and its french fries after its Irvine HQ donated $25,000 to the California State GOP But… what about all their past contributions to state Democratic party PACs?

Speaking of Nazis, there are seven candidates for MAYOR in HILTON HEAD, SC Two, count them, two are Nazi sympathizers.

One is a Holocaust denier. Another is an admirer of Hitler. On the other hand, they promise to bring economic development to the coastal beach town.

Michael Santomauro hails from New York City and has resided in Hilton Head for three years. He has made a career as a publisher of hate literature on good paper stock. His name might be familiar to those who recall he ran a roommate matching service that also distributed hate literature in Manhattan. The self-described “Holocaust revisionist” and believer that Jews control banking and entertainment is for lower development on the island and better traffic management. He also wants the state to allow greater free speech for his hate.

Rabbi Brad Bloom of South Carolina’s Congregation Beth Yam (Yam.. get it.. they are at a sea resort) will make sure he is defeated. In 1999, Rabbi Bloom led a congregation in Sacramento, when two brothers (who had been fingered for murdering two gay men) set fire to three synagogues in the California capital.

A second candidate is Rochelle Williams. She runs a free summer lunch program for needy children, and ran for mayor a few years ago. This is her second attempt. She has stated that she thinks that Adolf Hitler was successful in uniting people, and that he did what he had to do to get followers. An admirer of Hitler’s ablity to exert power and control people, she said, “He must have been doing something right.”

Speaking of dead. The Village Voice has suspended its postings of new online stories. It stopped its print editions a year ago. The mother of so many alternative news weeklies and the employer of so many famed Jewish left-wing and progressive critics, thinkers and writers, The Voice will most likely cease all operations and operations. In 1967, The Village Voice was the best-selling weekly newspaper in the United States. Its weekly circulation was higher than the circulations of 95% of America’s daily newspapers in the largest cities. Four daily NYC newspapers died, but the Village Voice kept running and growing. An average week contained 1200 classified ads. Everyone I know got a tleast one of their NYC apartments through a Vilage Voice ad.

Coca Cola has purchased a chain of coffee bars. COSTA COFFEE was acquired for $5.1 Billion.

Is it a reaction to Pepsi’s purchase of SodaStream? NO.
Is it akin to JAB/Keurig/Peet’s acquisition of Pret A Manger? NO

Should the Hakak family of Israel, with their interest in AROMA coffee bars call PEPSI? Indra Nooyi can be contacted at 1-800-433-265X

There is still time to register for the Fall 2018 TUFT’S UNIVERSITY course on COLONIZING PALESTINE. Part of the COLONIALISM STUDIES program, it is taught by Tom Abowd. Mr. Abowd is a Lecturer in American Studies and Colonialism Studies. CST 0094-04 will include the novels of Anton Shammas and Emile Habiby, and the creative writing of Edward Said and Suad Amiry. Students will read poetry by Mahmoud Darwish and Naomi Nye, and analyze the films of Elia Suleiman, Mia Masri, Emad Burnat, Michel Khleifi, and others. The course description invites stidents to understand how “the Israeli state … illegally occupies Palestine…” Themes will include the notions of nationalism and national identity, settler-colonialism, gender and sexuality, refugee politics, cultural hybridity, class politics, violence, and memory.

The student group TUFTS FRIENDS OF ISRAEL posted a statement about the course. Spencer Zeff, a co-President of the group added that “TUFTS should offer courses exploring both the Israeli-Palestinian conflict and Palestinian culture separate from the conflict. The Palestinian people, as with the Israeli and Jewish peoples, do not exist just in terms of the conflict, and framing it as such actually does a disservice to the rich peoplehood Palestinians share. By boiling a complex geopolitical issue down to the simplistic colonizer-colonized binary, this course delegitimizes the rightful Jewish claim to live in the land of their origins. Jews are of course indigenous to Israel — where else would Jews be from? Tufts University has defended this course because of the professor’s academic freedom, and while he has the right to teach on this topic and focus on Palestinian perspectives, a disservice is done to students looking for a holistic and nuanced perspective of such an important issue on campus and in the world.”