My Shabbat with Steve Bannon; Roseanne; Cheney-Lippold; and Other Ashamnu’s 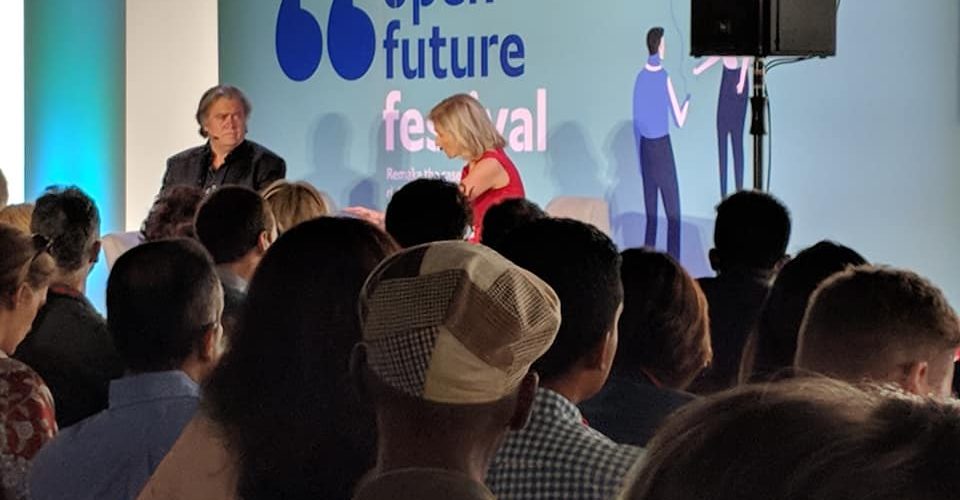 FOR THE SIN OF LETTING RACISTS SHOUT LOUDER

Just as I happen to notice so many subway and street beggars in the days leading up to Yom Kippur, I wanted to confront the words of Bannon in person to get a sense of who he is and the threat he repesents… especially before the Vidui.

I applaud The Economist for hosting him and having him faceoff with The Economist’s editor in chief Zanny Minton Beddoes. She was remarkable at trying to keep him focused on her questions, and calling him on most of his bold, sweaty-faced lies.

Bannon’s claims and statements were so easy to believe, so digestible, and packaged perfectly.

Even though they were lies.

I saw his mastery of modern communications. He said that the European leaders who seek to target Roma residents were not racists, but helpers. He remarked that his efforts to limit immigration to the United States was done to HELP Hispanic and African American citizens of the United States. He stated that the best time to be a worker in the United States was the 19th Century… umm.. you mean a time of 60+ hour work weeks, no minimum wages, dangerous conditions, child labor, and slavery?

It was easy to be seduced by his words, and important to watch him up-close and live, in action. When a member of the adueince introduced herself as an undocumented “dreamer” and offered him a book she authored, he graciously accepted it, and asked her to autograph it… completely defusing her attempt at confrontation. When someone criticized him support of tax cuts, yet his espousal of support for blue collar workers, he said that he was against the tax cuts on the rich but that MNUCHUN AND COHN had won over Trump. (DOG WHISTLE ALERT…. mentioning two Jewish names was no accident. Silent to most, it was a high puitched whistle to Bannon;s racist base of support). When asked if Bannon wanted Trump as his candidate or whether Trump was just a vehicle for his Breitbart based ideas, Bannon shared that he approached Lou Dobbs, Jeff Sessions and Sarah Palin at first, but then teamed up with Trump, since he “got it” better.

When former UK Foreign Secretary Miliband took the stage after Bannon’s half hour, it was sad. Miliband’s ideas were logical and acceptable and brilliant, but his presentation was dull and wonkie. It was easy to see why Bannon’s hate is popular. He was simple, story-fied, and false. As Hebrew University educator Yuval Noah Harari likes to say, a story is what wins, and it doesnt have to be true.

FOR THE SIN OF LETTING LIARS WIN

The polls showed New York State Governor Andrew Cuomo has a 40-point lead against Cynthia Nixon, an actress and activist turned progressive contendor for the NY State Guberantorial Democratic Party primary election. Cuomo was expected to win 70%-30%. He ended up with about 65% of the votes.

Yet even with such a large lead, his campaign sent a mailer to Jewish households accusing Cynthia Nixon of being anti-Semitic, anti-Yeshiva, and anti-Israel.

The mailer was created by two of his most senior Jewish aides. “Oops,” they said, they did not know the full contents of the mailer.

I have seen Cynthia Nixon at jewish worship services. I still have a kippah from one of her son’s bar mitzvah ceremonies.

It was a disgusting election tactic that was unnecessary as well as disgusting.

A multi term NY State Senator from Brooklyn won re-election even though he votes against the interests of the majority of his constituents and held up a state budget until he got the state to end its investigation into yeshiva illegalities. And a young woman in Brooklyn won her bid to be a NY State legislator even though it turned out that she said she falsely said that she graduated Columbia University (didnt graduate), was an immigrant (Miami is not a foreign country), and is Jewish (jury is out on this one).

FOR THE SIN OF IGNORING SELF INJURY AND DRUG AB– USE

Mac Miller, an award winning musician/rapper, died of an apparent drug overdose at the age of 26. Malcolm James McCormick was raised Jewish. His illegal use of substances was well known, as was a DUI arrest. But his free will and the help of enablers, as well as not attending rehab, ended his life.

Additionally, we hear that the character of Roseanne Conners will die on the relaunch of the television series, “The Conners.” The series is being relaunched without her as a cast member. Her character will die of an opioid addiction, which was hinted to, or actually shown dueing the series relaunch in Spring 2018.

Roseanne Barr said that she plans to visit the State of Israel when the The Conners airs on October 16, 2018, and work on her knowledge of the Hebrew language. She told Dr. Mehmat Oz that she wanted to be in a “joyous, positive, happy place.” She said, “…I want to be able to learn Hebrew, speak Hebrew fluently, because, … I read very slow but I know the letters and I love the letters, but, I want to speak it,… I have quite a few teachers over the years that live [in Israel] … and I want to study.”

FOR THE SIN OF CONFUSING ACADEMIC FREEDOM WITH STUPIDITY AND HATE

The news at THE UNIVERSITY OF MICHIGAN this week is that professor John Cheney-Lippold apologized that he rescinded his offer to write a recommendation letter for junior Abigail Ingber, who requested the letter for an application for a study abroad program in Israel. The American Culture Department teacher said that as part of his academic boycott of the State of Israel in support of Palestinians living in Palestine, he would be unable to write a recommendation for the Literature, Science, and the Arts (LSA) student.

Cheney-Lippold initailly placed the blame on his university department, but later admitted it was his personal stance and participation in “BDS.” he told the campus newspaper that he “was following a call by representatives of Palestinian civil society to boycott Israel in a very similar tactical frame as South Africa. The idea is that I support communities who organize themselves and ask for international support to achieve equal rights, freedom and to prevent violations of international law.”

LSA senior Kendall Coden, the Chair of the University of Michigan Hillel association reported her disappointment and said that professors should encourage students to explore educational opportunities without the influence of personal politics. Coden said, “Students should not be denied the opportunity to experience another culture as a result of a professor’s political viewpoints.”

The University administration wrote that, “It is disappointing that a faculty member would allow their personal political beliefs to limit the support they are willing to otherwise provide for our students… We will engage our faculty colleagues in deep discussions to clarify how the expression of our shared values plays out in support of all students.” Michigan Regent Andrea Fischer Newman tweeted that she was disappointed in the tenure track professor. Jonathan Greenblatt, CEO of the Anti-Defamation League, tweeted that “A student striving to learn and further their education should never be a victim of political bias.”

Professor Cheney-Lippold affirmed that he harbors no bad will against the student, and that “I would have very gladly written a letter for any other graduate program or study abroad. The idea is that I am just one person, and by refusing to write that letter or at least rescinding it, I tried to keep to my conscious and to the fact that I believe that the boycott is a good tactic to enhance human rights and to get everyone in Israel-Palestine to have what international criminal court and the U.N. in general has requested, which is equal rights for everybody…. As a [University of Michicagn] professor, I’m not just a machine writing things for people. I have opinions and even though a letter of recommendation is about the student, a lot of thought goes into them. It’s not a blank check where I’m signing for them to go to any place they want, it is a dialogue. It’s what the University is about, talking through differences and really figuring out where each other stands, not expecting something or assuming something, but really trying to get into what is the key difference. Seeing what can we do more, how can we have a larger campus-wide discussion. I want to push it beyond the horse-race politics of what John did or did not say.”

LSA junior Sophee Langerman told her campus paper that she supported the professor’s decision since in her opinion, “A trip to Israeli-occupied Palestine would mean the support of the mass murder and oppression of not only Palestinians, but Ethiopian Jews, Mizrahi Jews, East-Asian immigrants and other non-white minority communities.” She added that she hoped hat a boycott will encourage dialogue and activism for students and faculty alike at the University.

Mass murder? Somehow I don’t think Mx Langerman will enjoy peaceful dialogue if someone diagrees with her characterization of Israel.

Cheney-Lippold, an associate professor and an expert in the field of big data and surveillance, received over 500 emails including a sprinkling of death threats, according to Palestine Legal, a Chicago-based advocacy group that is helping him, and Radhika Sainath, a NYC based staff attorney.