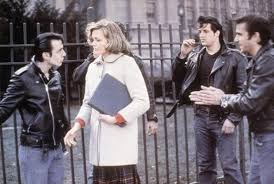 Leah Forester, a popular, up and coming Orthodox Jewish stand-up comedian booked performances at a kosher restaurant in New York City: the Garden of Eat-In. Sadly, according to Forester and the eatery’s owner, Chaim Kirschner, the rabbis who manage his kosher certification, namely the Vaad Harabanim of Flatbush, threatened to blacklist the restaurant and remove its certification is they allowed her to perform at the sold-out show. You see, she is a lesbian, which is worse than even playing FM radio.

Although her shows and routines say nothing of her personal life, the Hasidic community which she grew up in has whispered about her sexual orientation. SEE SOME OF HER ROUTINES HERE

Orchidea is a kosher restaurant in Borough Park, Brooklyn. It reached out to the comedian and offered to host the popular party. It, too, received a threatening call. It it dared to host the party, its kosher certification would be revoked.

The event planners are in the process of finding a new secret venue where they can cater it with kosher takeout food and not put a host’s kosher certification in jeopardy.

Forster told NBC NEWS that her career suffered a decline four years ago when she was outed. She added, “My parents disowned me and told me not to sit shiva when they die.” Forster refuses to be a victim, saying, “I’m a happy positive person.” Rabbi Samuel David (a.k.a. Shmuel Dovid) Beck, a kashrus supervisor, refused to comment on the incident.

Speaking of Brooklyn and its Gowanus Canal, New York State Senator Simcha Felder was re-elected to his seat in Albany last month. A registered Democrat, he voted and caucused with the Republicans in the past, giving the Republicans a majority and wielding a lot of power, which he used to prevent state agencies from investigating yeshivot or placing cameras to catch speeders in his district. Alas, now that the Republicans lost their slight majority, Felder, though a Democrat, has lost his committee leadership roles. He is the only Brooklyn Democrat not to receive a chairpersonship.

Oh, on the topic of politicans protecting some Jewish schools from state oversight on their substandard levels of secular education, some Catholic parochial schools have announced that they, too, will boycott New York State’s desire to investigate them. The issue? In some upstate districts, public educators will be judging the Catholic parochial school curriculums, schools with whom they are in competition.

In The Wall Street Journal, Rabbi Elya Brudny (Mir) and Rabbi Yisroel Reisman (Torah VoDass) of Brooklyn yeshivot, try to spin the issue in an Op-Ed which IMHO starts off crazily in their first sentence. They claim 70 years of experience between them (which is like saying that a room full of educators has 1,000 years of experience). They then choose to focus on a State mandate for classes in English, Math, and secular studies, and gloss over the criticisms against what they call the “outliers.”

Speaking of schools in NYC, a group of parents, funded by a right wing foundation, has brought a legal suit against the City of New York which seeks to racially, or socioeconomically, diversity NYC’s three top performing high schools. Stuyvesant, Brooklyn Tech, and Bronx Science require tests for admission, and its students lately have been are overwhelmingly of Asian and Jewish identities. Under a new proposal for Fall 2019, 20% of seats would be reserved for students with borderline test scores who are currently students at NYC middle schools in neighborhoods with higher levels of poverty. In the future, the current NYC mayor would like to eliminate the single test and base admission on other exams and rankings.

Speaking of winners and losers… NPR: National Public Radio reports that an anti-Jewish slur that was recorded resulted in an over $2 million payment to keep it quiet. According to the story, near billionaire Michael Ferro met with the heads of Tronc/Tribune media in Chicago, and complained about the people who impeded his efforts in Los Angeles. He asserted that the Southern California billionaire, philanthropist, and civic leader Eli Broad was part of a “Jewish cabal” that ran Los Angeles. A spokesman for Mr. Ferro called the claims “reckless allegations.” The story implies that this recorded conversation was used as leverage in a series of secret payments to total more than $2.5 million to avert a threatened lawsuit filed by a fired newspaper executive. Mr. Ferro no longer controls day-to-day operations at the media giant; he stepped down as chairman after sexual harassment accusations.

On the optic of payoffs, check the story on Ye Jianming, Chinese oil tycoon, and recipient of a prize from the State of Israel. Alas, he now is standing trial for issues related to bribery.

Speaking about C-Level leaders, David Harris, the CEO of the American Jewish Committee, wrote a letter in The New York Times refuting a claim by a Jewish columnist the anti Zionism differs from anti Semitism. harris reponded to a December 7 column by Michelle Goldberg titled “Anti-Zionism Isn’t the Same as Anti-Semitism.” Harris wrote that yes, anti-Zionism, B.D.S., and demonizing the State of Israel while ignoring egregious human rights violators aplenty smacks of anti-Jewish hatred.

Speaking of feeling violated… as a former NYU student… I felt disgusted that the undergraduate leaders, late into the night, at the close of a semester, without time for debate… decided to vote to support sanctions against the State of Israel. These elected leaders passed a resolution that would have NYU divest from three companies that sell goods to Israel: Caterpillar, General Electric, and Lockheed Martin. The resolution was co-athored by three students, including Rose Asaf, an Israeli Jewish NYU student. One co-author, Leen Dweik, said the it was not a boycott bill, just a divestment one. Less than a week after the resolution, the university administration issued a statement that read that NYU will not move forward with the measures asked for in the undergraduate resolution.

Speaking of college, the New York Times Sunday Magazine profiles Max Harris, a 2012 graduate of Massachusetts College of Art and Design, who is jailed as he awaits a trial for “managing” an artists cooporative/warehouse in Oakland, a shared residence, where 36 people died in a fire during a concert.