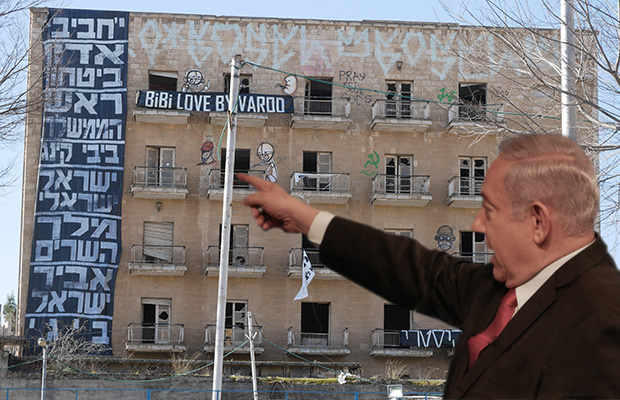 Keren Hayesod Street is one of the main arteries of West Jerusalem, connecting tony, residential Emek Refaim with Jerusalem’s downtown core and King George street. Folks wandering up or down that street over the past month may have noticed something a bit unusual – a 4-story high banner slung vertically along the full height of an abandoned, former government office building, steps away from Prime Minister Netanyahu’s official residence. A smaller horizontal banner announces the larger banner – :BiBi LOVE BY VAROD” – Varod (Hebrew for “pink”) is a hard working street artist in Jerusalem, and the creator of this homage, as it were.

The banner is made up of 8 nicknames for Benjamin Netanyahu. They’re in Hebrew, so I’ll translate them for you. What’s telling is that how you translate the words can be revealing about, you know, stuff. Both fans and critics of Israel’s Prime Minister can look at this list and agree with every nick name – which might explain why after a month, the banner is still up there, despite being a stone’s throw from Bibi’s house. It’s confusing!

Let’s look at the the first nickname for instance. It says “Ya Chabibi” Which is Arabic for “Oh my dear friend!” It’s commonly used by Arabic speakers as well as Hebrew speakers in Israel, particularly if they are Mizrachi or trying to seem cool by fronting like they’re Mizrachi. It’s funny because Arabs and Bibi have a contentious relationship and also, Bibi is the least Mizrachi person ever. But his base of support is, oddly enough, made up significantly of Mizrachi Jews.

The second nickname reads “Adon Bitachon” which references his long standing nickname “Mar Bitachon” which means Mr. Defense. “Adon Bitachon” is more nuanced. Bitachon means defense. Adon is an honorific almost deferential version of “Mr.” There’s also a religious aspect to it. Adon can mean “master” but “Adonai” – literally “My master” is another word for God. So replacing Mr. Defense with Master of Defense gives Bibi an almost divine stature. Which is funny. Because Bibi isn’t at all religious, but most of his supporters are at least traditional. The settlers that support Bibi are Orthodox. It’s also funny because despite his strong defense background, occupation related violence and terrorism persists and Israelis’ existential fears are stoked for votes at every election. Just in the last few days, rockets from Gaza have managed to send Tel Aviv residents to bomb shelters and a house north of Tel Aviv was heavily damaged, injuring eight and killing two dogs. This forced Bibi to cut his trip to AIPAC short in order to deal with the problem. But Egypt negotiated the fastest cease fire I have ever seen and Palestinian terror groups say they don’t know who fired the missiles. This is after months of weekly clashes at the Gaza border between the IDF and Palestinian protesters. Oh, and lets not forget the incendiary balloons. It’s a mess down there despite the Lord of Defense’s best efforts. Or… it would be much worse without him. See how this works?

The next nickname is “Rosh Hamimshala” which just means “head of state” Nothing remarkable there, just more fawning perhaps? It’s followed by another nickname that reads “Bibi King” which refers to legendary blues guitarist BB King. What it really means is that Netanyahu has been in power so long that he’s achieved royalty status. That sort of longevity and the kinds of ideological contortions and moral sacrifices one has to make in order to stay in power at any cost – well, some might see that as not so good. Others, however, might feel that Bibi is to politics what BB is to guitars – a virtuoso of the genre!

“Yisrael Yisraeli” is the 5th nickname – That’s Israel’s version of John Doe. Whenever there’s an ad for a credit card for instance, the name of the owner is displayed as “Israel Israeli” – Israel is a common first name. How else can that line be read? That Bibi is Everyman. A common man of the people. Who sips vintage champagne and Cuban cigars provided by billionaire friends. Just like every person in Israel. Yeah.

The 6th nickname reads “Melech HaSarim” means “King of the Ministers.” Bibi is currently not just the PM, but also the Minister of Communications, Economy, Foreign Affairs, Health, Regional Cooperation and Defense. That’s a lot of ministerial portfolios for a sitting Prime Minister – this is generally not seen as such a praiseworthy accomplishment. So while King of Ministers sounds like a bad ass title, it’s actually poking fun at Bibi and his centralization of power occasioned by coalition politics.

The next nickname is “Abir Yisrael” which means the “Knight of Israel.” Knights are generally seen as noble beings. They are granted their knighthoods by royalty and dedicate their lives to being in service of their country. Little girls dream of being princesses who are swept away by a knight in shining armor. If you love Bibi, it’s a good look for him. But… remember the Crusaders? They were lead by Knights who raped, pillaged and murdered their way to the Promised Land and save it from Jewish and Muslim interlopers in the name of Christ. Some of Bibi’s staunchest allies are American Evangelical Christians. Many believe that Jesus will return only after a Rapture event, Said Rapture requires 144,000 Jews to be converted to Christianity and then all the true believers will rise to heaven. In any case, back in the day, Christian proselytizers in Israel were subject to arrest and deportation. Now, after years of Bibi in power, they operate openly in Israel without fear. How awful would it look if Bibi arrested his allies? If Bibi is indeed a Knight – he sure isn’t a Jewish Knight if you know what I mean. Besides, there are no Knights in Judaism.

Finally, the last nickname is “Biggie.” This of course refers to rapper Christopher George Latore Wallace, also known as The Notorious B.I.G. “Biggie” and “Bibi” sound similar and as a rapper, Biggie was huge – hence the name – both in terms of his career and his girth. Biggie is often cited as one of the best rappers ever and often introduced “gangsta” themes to his music. In Israel, when you want to praise someone, you might say “Duuuude! You’re huge” or “Atah gadol!” which is translated as “You are large!” but really means “You’re the best!” Calling Bibi “Biggie” can then be seen as a compliment. But Biggie, who was gunned down at the height of his fame in a drive-by shooting, popularized a type of rap called “Gangsta Rap.” Given all the indictments against Bibi, and his affinity for Cuban cigars and expensive champagne, maybe that’s an association that ought to be avoided?

And there you have it. Thanks for the exercise in Israeli politics, language and culture Varod!